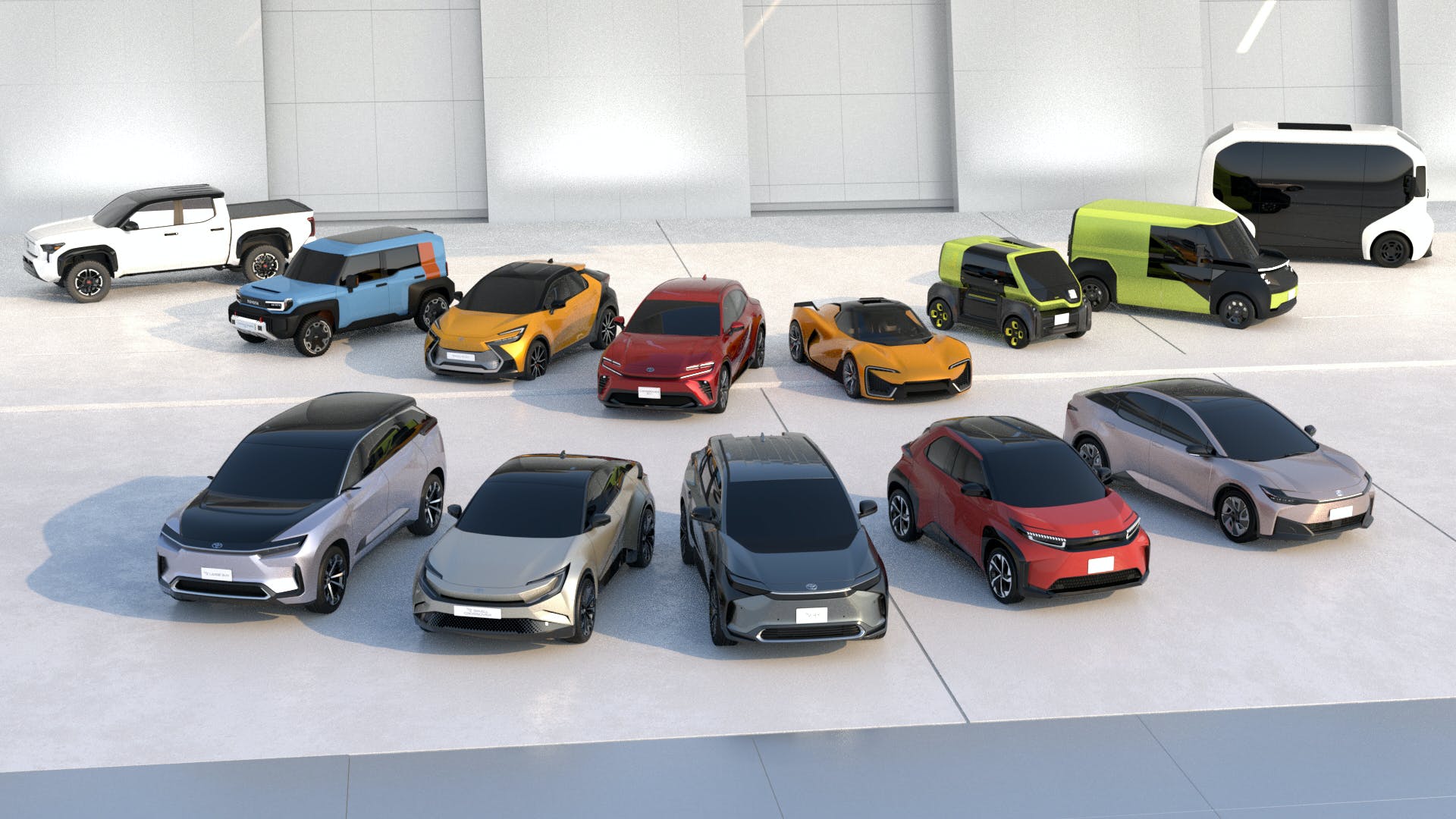 During a media briefing of its battery-electric vehicle strategy, Toyota previewed 11 upcoming EVs that it will be building. Alongside the bZ4X, the company released four other models that will be sold under its bZ sub brand. These vehicles will be built on Toyota’s e-TNGA platform and be sold across multiple global markets. The Motomachi Plant in Japan has already started preparations for producing the bZ4X ahead of its launch in the middle of next year.

Toyota’s bZ sub brand will expand beyond the bZ4X with three more crossovers and a sedan. Of the three utility vehicles, only two will likely make it to North America because one appears to be a model tailored specifically for Europe and Japan. Called the bZ Small Crossover, it looks like a city car with rugged body cladding to give it a more utilitarian appearance. Akio Toyoda, President of Toyota Motor Corporation noted that larger batteries make vehicles heavier and more expensive; as a result, Toyota needs to be thorough and particular about power efficiency. The company is aiming for a consumption of 125 Wh per kilometer, the highest in the compact crossover segment.

The bZ Compact SUV will be one of them and it features a coupe-like shape similar to what you see in the current generation Toyota C-HR. It appears similar in size to that vehicle, too, and the front fascia also looks like an evolution of the C-HR blended with the new grille-free fascia that first debuted in the new Aygo X. The two-tone exterior also hints that this is a sportier and more aerodynamic crossover.

Alongside the two smaller crossovers is a three-row model that looks like a scaled-up bZ4X. From the looks of it, the bZ Large SUV is about the same size as the current Highlander, featuring the same grille-free look and headlight treatment as its more compact sibling. Last is the bZ SDN, a sedan that Toyoda noted as a vehicle that should meet the customer’s expectations for a first car. Although it’s dubbed a mid-size vehicle, the bZ SDN appears to be similar in size to the Corolla, meaning it’ll be a compact car in North America. Like the other bZ models, it also gets the same front fascia treatment as the bZ4X and the bZ Large SUV.

Toyota didn’t stop with the five vehicles under its bZ sub brand. It previewed eight other vehicles, several of which look very production-ready. In total, Toyota will roll out 30 new battery-electric vehicles by 2030 across its global lineup for both brands in both retail and commercial segments. There are a couple of interesting models including what looks like a modern interpretation of the MR2 only with an electric motor (or two). This vehicle also dons a GR badge in the lower front fascia, hinting that the performance sub brand is going electric too. The car has a removable roof panel and its headlights encircle the openings in the front fascia.

Two vehicles that will surely whet the appetites of North American consumers are the Pickup EV and Compact Cruise EV concept cars. The former looks like an all-electric Tacoma with cues taken from the new generation Tundra full-size truck while the latter appears to be the next evolution of the FT-4X Concept that was first shown at the 2017 New York Auto Show. Two additional small crossovers prototypes were shown alongside the five bZ models and the others. The Crossover EV concept appears to hint at a vehicle the slots between the subcompact and compact classes while the smaller one, dubbed the Small SU EV, is a look at what an all-electric city-sized crossover for specific markets could be.

Toyota also showed off two EV concepts focused on practicality and commercial use alongside the e-Palette, the Micro Box, and Mid Box. These three vehicles are made specifically for hauling people, cargo, or a combination of both. They offer extensive customizability, enabling them to be tailored specifically for every requirement from delivery and ride-sharing to recreational use.

By 2030, Toyota aims to sell 3.5 million battery-electric vehicles across all global markets. This marks a turning point for the company who has been a pioneer in electrification when it introduced the first-generation Prius in 1999. It was already working on EVs by then, selling two iterations of the all-electric RAV4 from 1997 to 2003 and then again from 2012 to 2014. Toyota has long developed batteries in-house; it currently uses nickel-metal-hydride and lithium-ion packs, the latter of which it accelerated development in 2003. The company also established its Battery Research Division in 2008 to help with the commercialization of solid-state batteries and other next-generation packs.

In total, Toyota has invested over 1 trillion Yen, an equivalent of $8.7 billion. As part of its future EV lineup showcase, it also announced that it’s spending another 2 trillion Yen ($17.6 billion) in battery development to make them more affordable and further improve their quality, totaling 3.5 billion Yen ($30.7 billion). Toyota is also aiming to make its manufacturing plants carbon neutral by 2035 through the reduction of energy use and improving its production methods. As a whole, Toyota will spend around 8 trillion Yen ($70 billion) in electrifying its lineup.

Despite the addition of a significant number of EVs, Toyota intends to continue offering multiple electrification choices. “It is not us but local markets and our customers who decide which options to choose,” said Toyoda. “We believe that quickly adapting to changes in the future is more important than trying to predict the future, which is uncertain. That is why we want to keep options available for our customers until the right path is clear.”