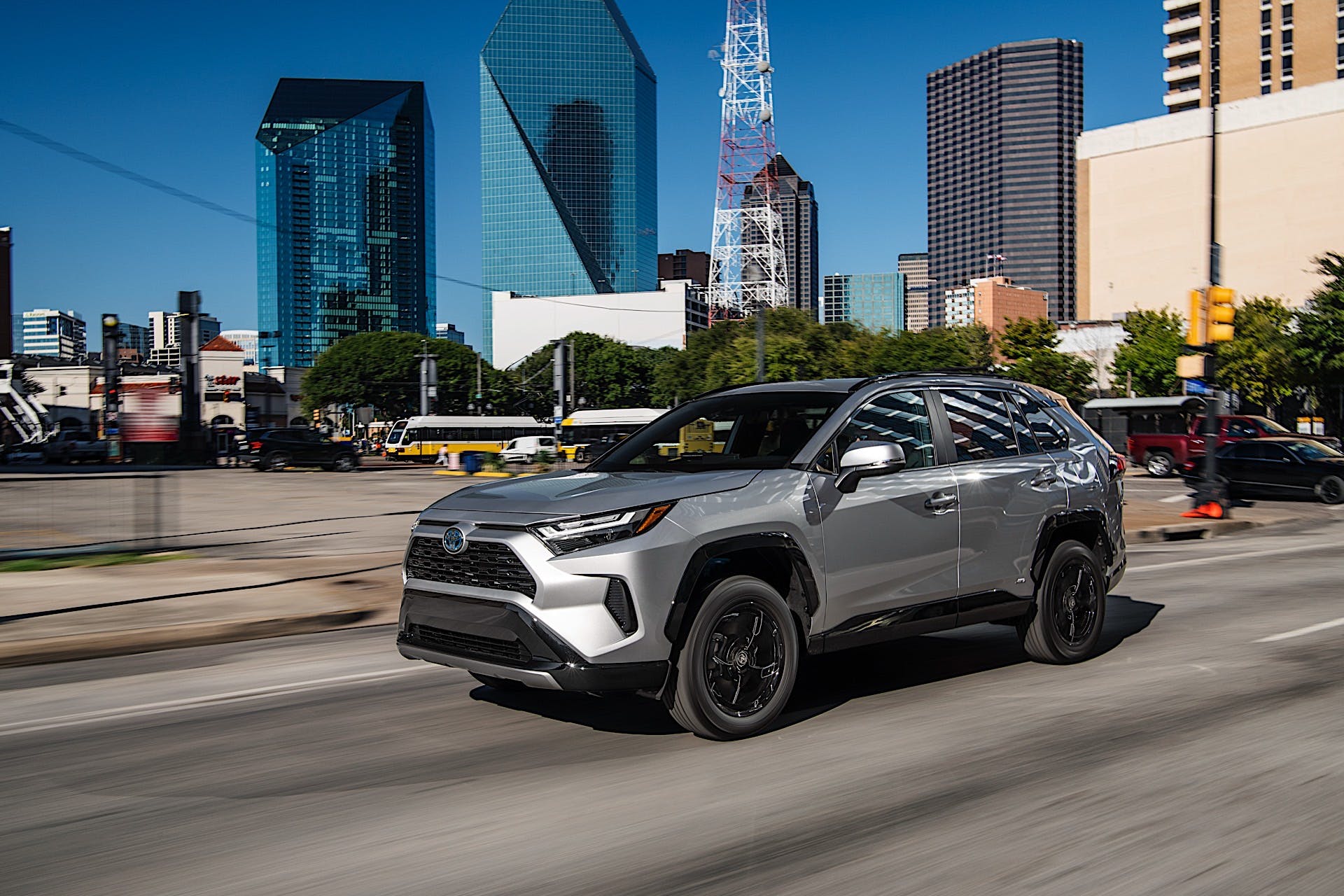 The 2022 Toyota RAV4 Hybrid is getting a new version that offers sporty looks without needing to go up to the XSE grade. A new SE trim joins the lineup to expand the electrified crossover’s appeal to consumers wanting the more aggressive looks at a lower price point. It gets cloth upholstery, a 7.0-inch touch screen, and a six-speaker audio system as standard equipment. Toyota will offer several options on this trim including the Weather package, which adds heated front seats, a heated steering wheel, and rain-sensing wipers, The Convenience package adds a height-adjustable power liftgate, a 9.0-inch touch screen, and a moonroof.

Every 2022 Toyota RAV4 Hybrid also gets additional standard features including LED interior lighting and a locking glovebox. XLE and higher trims get illuminated interior switches while the range-topping Limited trim adds an eight-way power passenger’s seat. The SE and XSE grades also get a new Cavalry Blue exterior color with a black roof. XLE and higher grades also get a new headlight design, which Toyota says is more stylish and improves effectiveness. The XLE Premium and Limited variants also get a new fog light layout. XSE Hybrid models adopt the vertical LED fog lights from the RAV4 Prime XSE. The XSE grade is limited only to the electrified RAV4 models. It gets a sportier suspension and steering calibration versus the other RAV4 models. In the standard RAV4 Hybrid, the XSE grade gets black 18-inch alloy wheels while RAV4 Prime XSE gets 19-inch units shod in wider tires.

Powered by a 2.5-liter four-cylinder coupled to two electric drive motors, a planetary gear set, and a lithium-ion battery, the standard RAV4 Hybrid makes 219 hp combined. The EPA rates it at 41/38/40 mpg city/highway/combined. The RAV4 Prime makes 302 hp combined courtesy of a more powerful front electric drive motor and an 18.0-kWh battery mounted on the floor. You don’t lose out on efficiency either because it’s EPA-rated at 40/36/38 mpg. With a full tank and a fully charged battery, the RAV4 Prime is capable of traveling up to 600 miles. A 42-mile all-electric range also helps make it more flexible because you don’t need to use the gas engine much for most of your commute.

Both the RAV4 Hybrid and RAV4 Prime use an e-AWD system, meaning there’s no connection between the front and rear axles. Instead, Toyota mounts an electric motor in the back to add extra traction back there. This means you’ll get more of an FWD sensation when driving both crossovers because the rear electric drive motor doesn’t turn on immediately when you mash the throttle. As a result, you’ll notice the front wheels clawing first before the rear wheels do anything.

More information regarding the 2022 Toyota RAV4 lineup will be announced in December. Based on this recent announcement, there could be a special edition model to commemorate the crossover’s 25th anniversary. It could also be the launch of a refreshed model with design tweaks and quality of life changes. Based on what was revealed regarding the SE Hybrid grade, the 9.0-inch touch screen, which was once only available on the RAV4 Prime, will be offered on the standard hybrid as well. Toyota could also replace the TSS 2.0 suite with the newer TSS 2.5+ found in the Camry and Highlander.