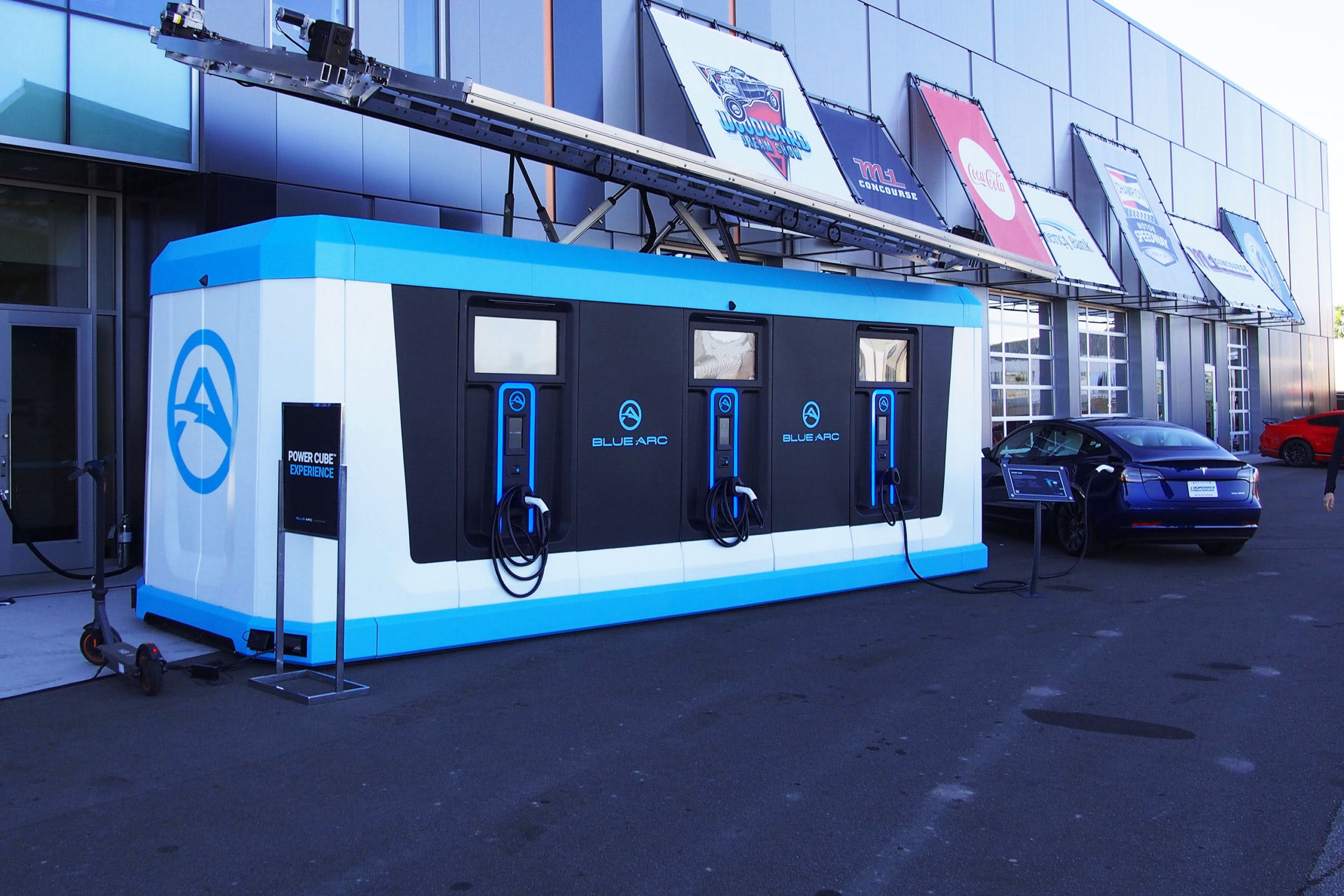 How do you recharge EVs in locations that aren’t connected to the electrical grid? How do you juice up battery-powered vehicles during an emergency? Whether they run on fossil fuels, hydrogen or something else, portable generators are one solution to these issues, but the Power Cube from a company called Blue Arc is another option.

A so-called micro grid, the Power Cube is just like a battery pack you’d use to revive your depleted smartphone, though this portable, remote-controlled charging station is many, many times larger than the gadget you’d keep in your backpack or purse. Possibly going on sale late next year, the Power Cube will be offered in a variety of sizes, capacities and configurations, but no matter the SKU, this device is designed to provide a reliable – and abundant – source of electricity.

SEE ALSO: The best portable power stations keep you charged on the go

A flexible charging option for EV fleet operators, the Power Cube can easily be unloaded in locations where vehicle chargers are not currently installed. This gigantic power brick is also ideal for emergencies or natural disasters. As electric vehicles become more and more popular, drivers fleeing disaster zones in EVs will need someplace to charge up if the power grid goes down, and this portable solution could be perfect for situations like these.

Of course, the Power Cube can do much more than just keep electric vehicles topped up. During blackouts, it could run entire buildings, just like a conventional generator, though without any tailpipe emissions. You could also use this product to charge a phalanx of batteries for drills or chain saws, small power tools that might be used in disaster situations. “And that’s where we’ve kind of said, this thing’s migrated from being an EV charger solution to more of a micro grid, that it can be used for so many different applications,” explained Ted Jacquay, product manager for Shyft Innovations.

The Power Cube can Level 1 charge EVs or run other appliances that tap into standard, 110-volt household outlets. Of course, this is of little use to drivers unless you have days and days to charge, which is why the product is also able to supply up to 19 kilowatts of AC power for Level 2 vehicle charging and, according to Jacquay it “can do up to 120 [kW] DC fast charging.” That’s a surprisingly strong performance for what is essentially a supersized power brick.

According to Jacquay, the Power Cube will be offered in 10-, 20- and 30-foot lengths and in capacities ranging from 0.5 to 3 megawatts, likely with half-mW steps in between those bookends. The functional concept Blue Arc built is 20 feet long and its air-cooled batteries provide enough storage capacity to hold about half a megawatt of power. For better performance in all temperatures, the company is also developing liquid-cooled battery packs. These would be an ideal solution because when the batteries in a Blue Arc electric delivery van reach then end of their service lives, they can be plugged right into a Power Cube and used for many more years.

The Power Cube can be charged up from the electrical grid or a clean hydrogen generator, but that’s not all. It will be offered with a solar roof panel that automatically tracks the sun throughout the day. Jacquay said with 6 or so good hours of good, direct exposure, this can provide about 30 kilowatts of juice. Blue Arc is also working with a company in England that provides small power-generating windmills. The Power Cube’s roof can fit about six of these, which, depending on conditions, can also provide 30 or 40 kW of power according to Jacquay.

Improving versatility – and setting it apart from competing products – this Blue Arc micro grid is self-propelled. Yes, the whole unit can move under its own power like a gigantic remote-controlled car. At the push of a button, the Power Cube lifts up and rolls along on airless tires. The system has about 10.5 inches of ground clearance and can move at about 5 mph. That’s not too shabby for something weighting 28,000, which is what the demonstration unit tips the scales at.

Blue Arc is part of the Shyft Group (formerly Spartan Motors), a Michigan-headquartered company specializing in commercial vehicles. Other brands in the firm’s portfolio include Utilimaster, Royal Truck Body, Spartan RV Chassis and DuraMag. None of these divisions are household names for your typical driver, but commercial fleet operators and those adjacent should know them very well.

CHECK THIS OUT: Maserati’s first BEV is the GranTurismo Folgore with 750 hp

Blue Arc’s Power Cube is not available at the moment, but it should arrive sooner than later. Jacquay said they’re still trying to figure out what the base configuration will be “so we haven’t settled on the exact pricing models yet,” though customers will have the option to purchase or lease. Production is expected to commence late next year, though the company could pull that forward if demand is strong. Jacquay also noted that Power Cubes will be assembled somewhere in the Midwest in a Shyft Group facility.