Maserati’s first BEV is the GranTurismo Folgore with 750 hp 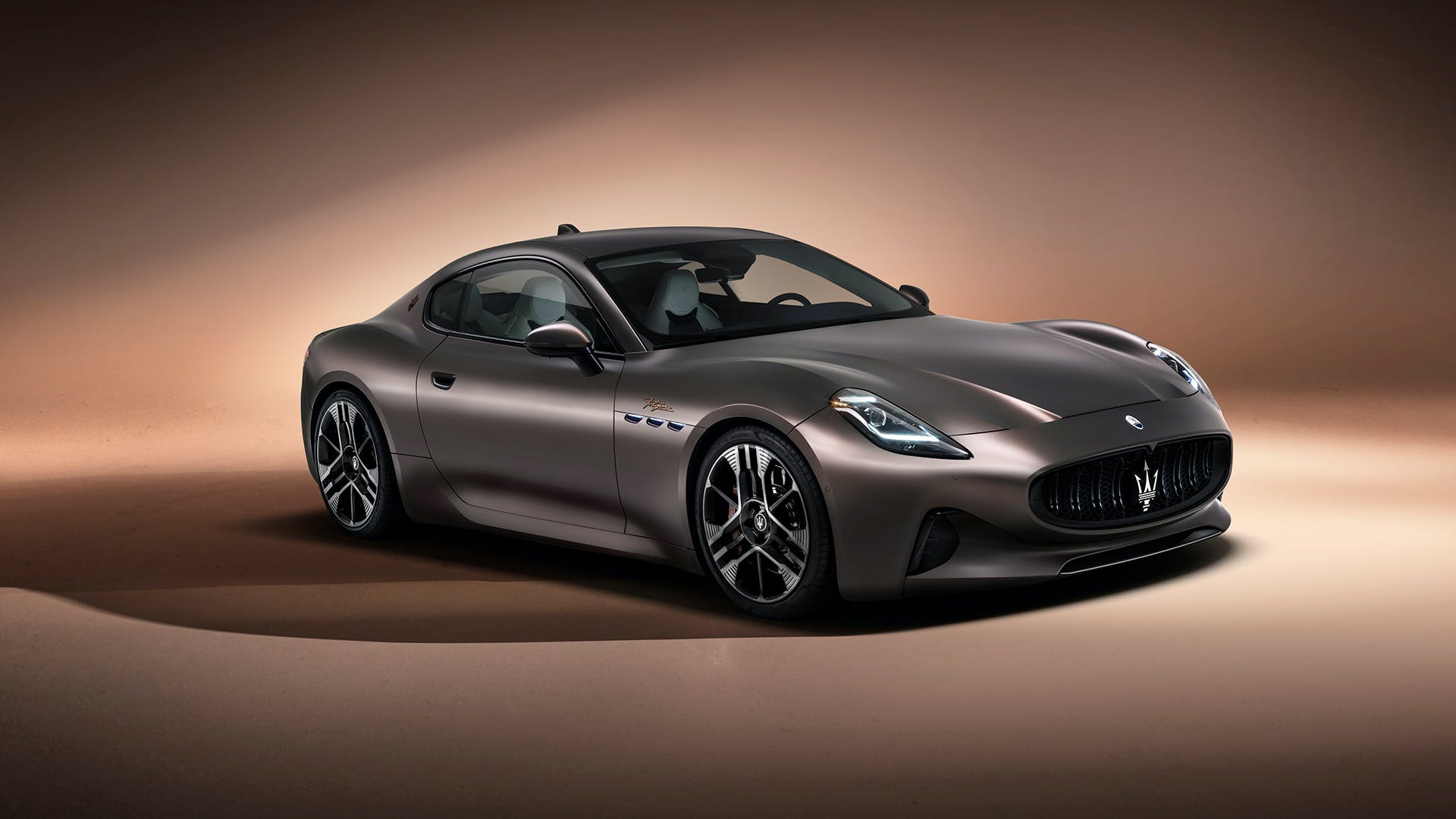 Maserati has unveiled its first all-electric vehicle, and it could easily be mistaken for its gasoline counterpart. The GranTurismo Folgore does have some subtle differences however, with a unique grille featuring glossy black inserts and a slightly anodized silk black base. Also finished in gloss black are the splitters, handles, DLO, and rear handle, while the badging and Trident logo are done in dark copper. The Italian automaker also outfitted the all-electric model with specific splitters, wheels, and front diffusers to improve drag coefficient by about 7% compared to the gasoline model (0.26 drag coefficient vs. 0.28). A specific air inlet has also been installed between the bumper and wheel arch to help reduce rustling inside the wheel arch.

No surprise, Maserati didn’t want to compromise performance when it came time for its first EV. Powered by three electric motors — one in the front and two in the rear — the GranTurismo Folgore offers approximately 750 horsepower (760 CV). These electric motors were designed exclusively for Maserati and are driven by silicon carbide inverters derived from the all-electric racing series, Formula E. The two-motor setup in the rear also allows for torque vectoring, where torque is independently directed to each motor on each side.

The battery pack on the GranTurismo Folgore is produced at the Marifiori Battery Hub assembly plant in Turin and has a capacity of 92.5 kWh (83 kWh usable). But instead of placing the battery modules underneath the seats, Maserati chose for a different formation that moves them around the central tunnel. The automaker calls the shape “T-bone” and it contributes to better handling performance. In fact, the GranTurismo Folgore sits lower than any other electric car on the market. According to Maserati, the all-electric sports coupe is capable of going zero-to-62 mph in 2.7 seconds, on its way to a top speed of 199 mph. While official range figures have not been announced, it should deliver over 200 miles of range. It’s clear however that Maserati is focused on delivering performance as its main priority. The model will support up to 270 kw of DC fast charging. Expect official figures to be revealed closer to the model’s launch in early 2023.

For potential buyers looking to transition from a traditional ICE Maserati GranTurismo and are wondering about the sound of the Folgore, worry not (or maybe a little bit). The company said “the natural acoustic dynamics of the electric motors driven by the inverters have been digitally shaped and integrated with the typical sound taken from the Maserati V8 tradition.” It’s becoming more interesting to see how automakers are handling the sound of their EVs and how important of a factor it’ll be for buyers in the future.

The Folgore will offer four different driving modes: Max Range, GT, Sport, and Corsa. In Max Range mode, the car will limit the maximum speed to about 80 mph and reduce the response of the acceleration pedal and limit the power of the climate control. Maserati recommends this mode when the battery is below 16% and no charger is immediately available. The default mode is GT, designed to provide a balanced driving experience with power limited to 80% of its full potential.

For those who want a dynamic driving experience, it comes from the Sport mode. The electric motors run at 100% and the suspension gets altered to enhance the driving dynamics. Torque vectoring works to reduce understeer, while traction control gives the driver more options. Lastly, the Corsa mode will deliver the “most extreme experience” with torque delivered extremely quickly from all three motors. Torque vectoring is set to deliver maximum performance when entering, navigating, and exiting corners, while the car sits closer to the ground to maximize vertical downforce. Other Folgore-specific features include automatic battery pre-conditioning, cabin temperature maintenance, EV Routing 2.0, and Dynamic Range Mapping 2.0. The first two features have become more prevalent in recent EVs, with automatic battery pre-conditioning preparing the battery for faster charging. Cabin temperature maintenance will maintain the car’s interior temperature even if it’s not running. The remaining two features are designed to aid the driver in planning their trip. EV Routing 2.0 accounts for the battery condition and expected range use, adding charging stops and optimizing the trip route accordingly. Dynamic Range Mapping 2.0 will display the maximum distance the vehicle can travel, and it’s updated in real-time according to the driving style and charge status of the battery pack.

Again, the Maserati GranTurismo Folgore will launch early 2023, so expect official pricing and range to be announced closer to its launch.