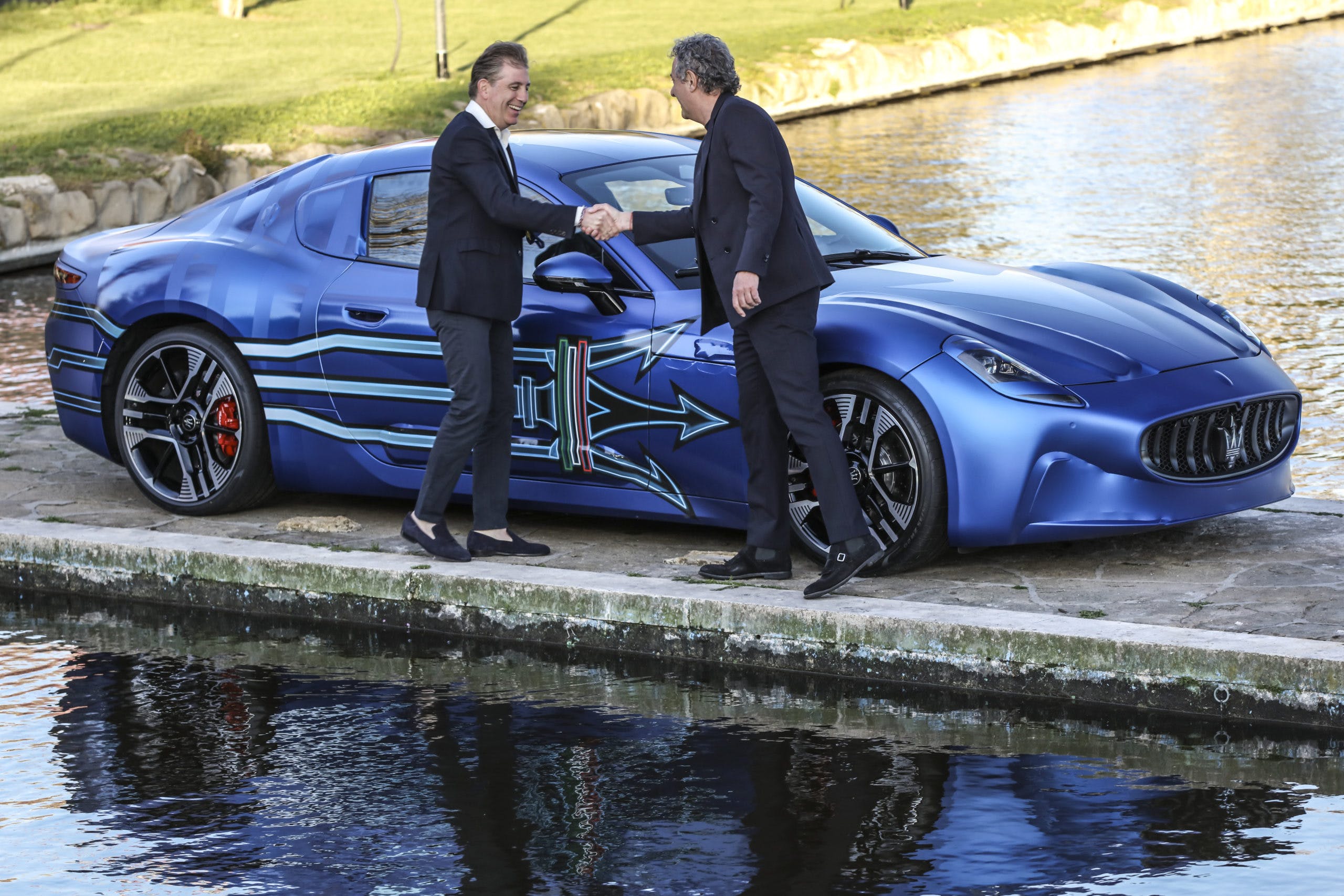 Maserati announced that it will make its on-track debut during season nine of Formula E and will partner with ROKiT Venturi Racing. The announcement of the multi-year partnership was made during the Rome E-Prix where something else made a surprise appearance. In the photo where Davide Grasso, CEO of Maserati, and Scott Swid, Chairman and Managing Partner of ROKiT Venturi Racing were shaking hands, the brand’s next-generation sports coupe can be seen hanging out in the background. The Maserati GranTurismo Folgore will be the brand’s first battery-electric vehicle and is the first of five models joining the lineup.

This particular prototype is wearing a blue exterior color and has Maserati’s logo emblazoned on the side. It also sports the same three-spoke aero wheels that were also used on the Grecale Folgore. Evolutionary is the best way to describe the Maserati GranTurismo Folgore’s exterior design, retaining the same silhouette as its predecessor. One major change is the shape of the headlights, which are narrower and vertical instead of horizontal. The enclosed grille retains a similar pattern as its predecessor complete with Maserati’s trident logo.

The GranTurismo Folgore will feature technology derived from Formula E and should get a dual-motor setup along with a large battery pack. Expect it to be one of the most powerful models of the five incoming BEVs and should also include an 800-volt charging architecture to allow for quick recharging using a DC charger. In addition to the coupe, a convertible should also be in the cards.

Maserati is the first Italian brand to participate in Formula E and will make its debut on the grid with a new Gen3 car. This vehicle is the lightest, most powerful single-seat electric race car in the series. Maserati says that it features a range of innovations in terms of design, production, and technology, but didn’t go into detail as to what these are. ROKiT Venturi Racing leads with two World Championships ahead of the Rome E-Prix. Last season, the team saw its most successful campaign to date with two victories, five podium finishes, and the Vice-World Champion for one of its drivers, Edoardo Mortara.

“Returning to motorsport with Formula E was a natural choice for Maserati. Indeed, we are driven by our passion and innovation,” said Grasso. “And we’re happy to share this adventure with a partner that abides by the same values as we do and is looking ahead to the future, just like us. We share with the ROKiT Venturi Racing team the same determination and desire to compete and win on circuits all over the world.”

Swid added that Maserati’s return to racing is good news for fans because it will see the brand return to top-tier competition. He noted that its entry into Formula E sees the marque return to its roots via the most progressive and fastest-growing form of motorsport. This also establishes ROKiT Venturi Racing’s foundations and presence in Formula E thanks to its partnership with Maserati.

The learnings from Formula E will be used to help develop Maserati’s BEV lineup as the brand aims for full electrification by 2030. Following the GranTurismo and Grecale next year, the MC20, next-generation Levante, and Quattroporte are confirmed to get all-electric versions wearing the Folgore badge. Along with the GranTurismo, at least two of these vehicles will use one of Stellantis’ new BEV-specific platforms.