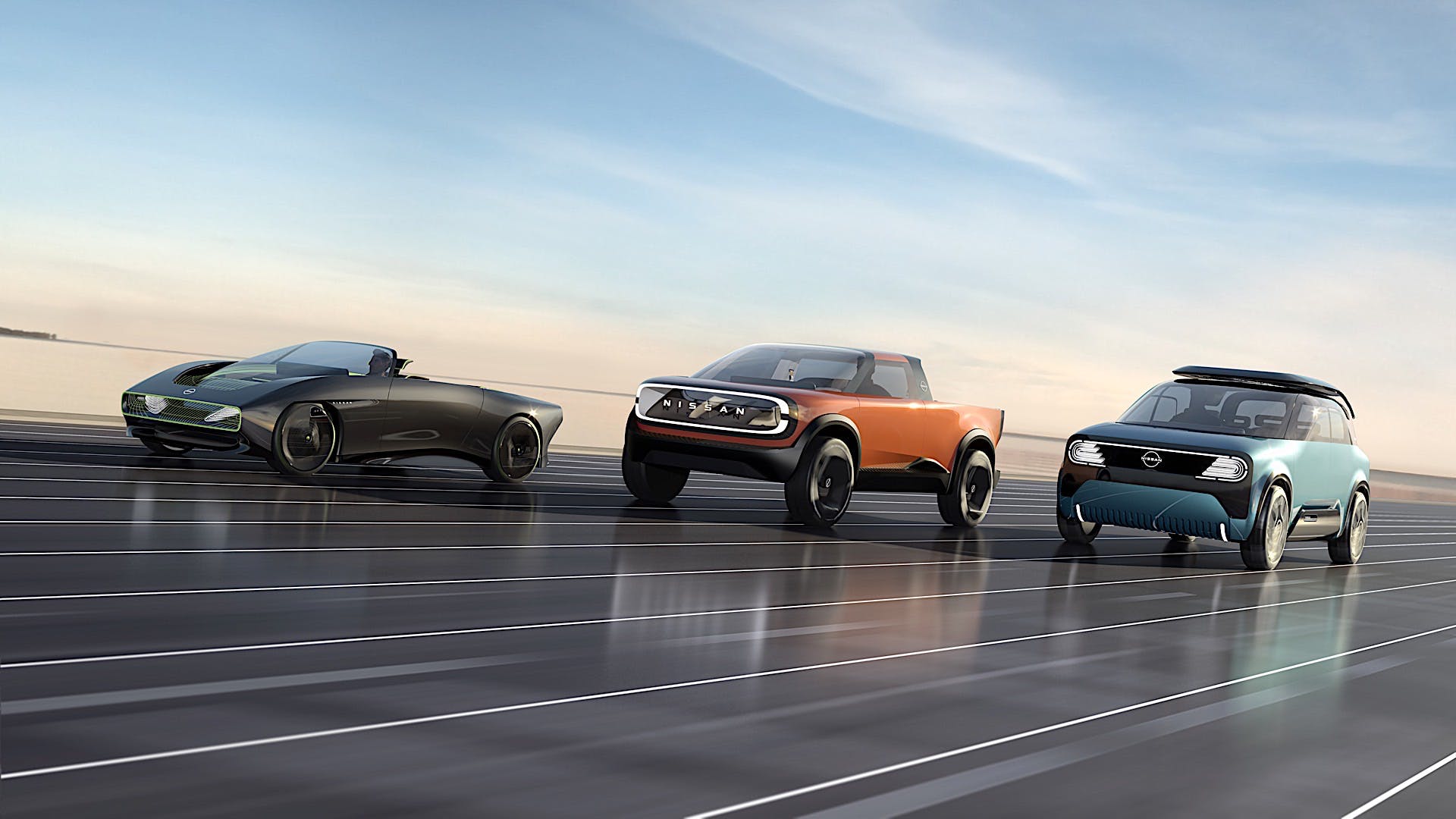 During Nissan’s Ambition 2030 announcement, the automaker revealed four concept vehicles that give us a glimpse at what’s in store in the near future. As part of its follow-up to the Nissan NEXT product offensive, Nissan will introduce 23 electrified vehicles over the next five years with 15 of those being battery-electric models.

The first concept is called the Chill-Out, a crossover that Nissan called a “mobile haven.” It features all of the latest driver assists and an occupant-focused interior with a massive display on the dash. This hints that the Chill-Out Concept has autonomous capabilities. Of the four, this is the closest to production since it rides on the CMF-EV platform that also underpins the Ariya and the Renault Mégane e-Tech. In terms of design, the Chill-Out looks like a mini Ariya, hinting that this could eventually turn into the next-generation Leaf. Word around is that the Leaf is going to turn into a subcompact crossover and its design is previewed by the Chill-Out. That means the next Leaf will likely be more aerodynamic than the current car thanks to its more curvaceous profile.

Sports cars will remain a fixture in Nissan’s lineup as evident in the new 2023 Z and that’s not changing in the age of electrification. The Nissan Max-Out Concept gives us a glimpse at what an all-electric performance car from the brand could look like. Like the Chill-Out, this two-seat convertible has a display spanning the whole dash. The exterior appears to borrow cues from the brand’s classic sports cars. Nissan didn’t release any specs for the Max-Out but said it provides a dynamic driving experience with little body roll, responsive steering, agile handling, and excellent stability to make the car feel one with the driver without sacrificing comfort. Will the Max-Out become the successor to the recently revealed 2023 Z? That remains to be seen because this is the farthest from reality of the four concept cars.

Nissan’s third concept is a crossover called the Hang-Out. Think of this as a mobile lounge wrapped in the body of a boxy subcompact SUV. The company describes it as an extension of one’s personal space and features swiveling seats. Nissan says the Hang-Out was designed to suppress vibrations and other impacts to minimize occupant motion sickness. The car also appears to have a removable glass canopy that you can use for camping. From the looks of it, the Hang-Out Concept could be a preview of the next-generation Kicks. Between its boxy proportions, subcompact dimensions, and focus on practicality, this hints that Nissan’s could add cool new features to make its smallest models more useful.

Last but likely the one that’s most appealing is the Nissan Surf-Out Concept. Essentially a single-cab small truck, the Surf-Out gives us a glimpse at what an all-electric pickup slotting below the Frontier could be like. Obviously, it will be a crew cab if it reaches production but this concept gives you practicality and flexibility in a package that should be easy to fit in urban areas and other tight spaces. Nissan says that the Surf-Out provides a smooth ride on all road surfaces. It features a wide range of power sources and a flat cargo area so to make the truck more useful.

Of the four concepts, the Chill-Out is the closest to production. The fact that Nissan revealed that it’s on the CMF-EV platform hints that it’s not far off from turning into the next Leaf. As for the Hang-Out and Surf-Out, these could eventually go into production on the same architecture as the Ariya. Considering that the CMF-EV platform can accommodate subcompact and compact crossovers, it’s likely more modular, allowing it to underpin vehicles with longer wheelbases and trucks.

Written by Stefan Ogbac
Follow Author
RELATED ARTICLES
Autopia 2099 is this Saturday! Here’s everything you need to know!
Tickets are on sale now for the world’s greatest EV show: Autopia 2099 – Presented by Nissan
2022 Nissan Leaf gets a significant price drop
3 reasons why you need floor mats for your Tesla Model 3
RELATED ARTICLES
JOIN THE EV PULSE NEWSLETTER
Receive weekly updates on each of our electrifying articles.