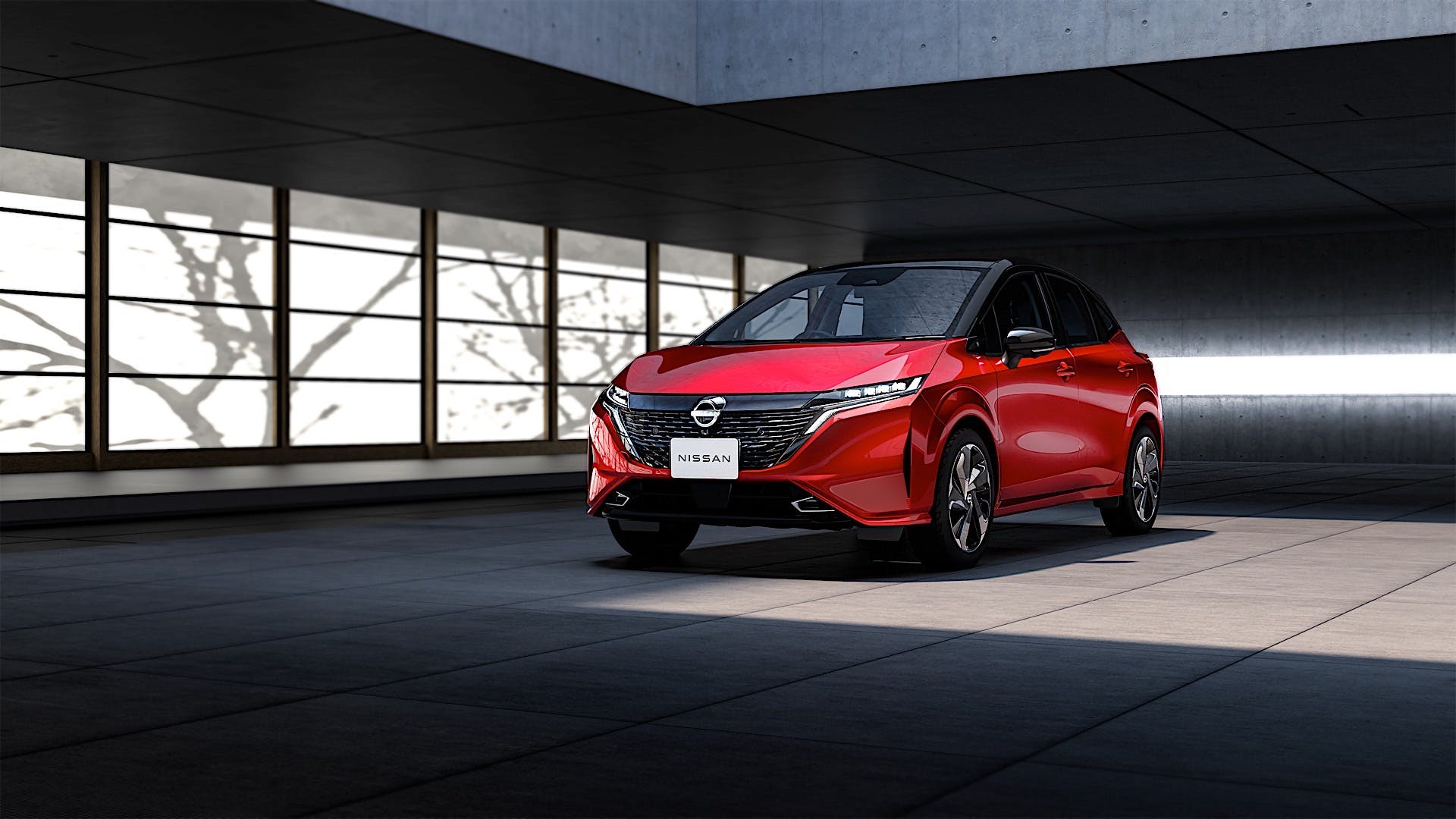 A new version of the Nissan Note has been announced and it aims to give you a more upscale experience in a city-friendly package. Meet the Nissan Note Aura, the latest addition to the new-generation Note lineup, which is offered exclusively with the e-Power series hybrid powertrain. The Note Aura differentiates itself from the standard models with a unique grille and rear bumper. Like its siblings, it also gets full-width LED taillights and available 17-inch alloy wheels with gunmetal resin inserts.

You can customize the Note Aura’s look with two-tone exterior color combos including black with a copper roof and red with a black roof. In total, there are 14 colors to choose from including five two-tone themes. Sequential turn signals and adaptive LED headlights hint that this Note isn’t your ordinary subcompact hatchback.

Inside is where the Nissan Note Aura sets itself apart. The comfortable zero-gravity front seats, which have become a staple on Nissan vehicles, are available with a Herringbone pattern finished in tweed-like fabric and leatherette upholstery. You can also opt for real leather done up in brown and black two-tone and complemented by the cloth inserts. The tweed-like fabric is also found on the front armrests and dash. To add to the Note Aura’s premium vibe, Nissan has added woodgrain trim on the center console and lower part of the dash.

On the tech front, the Note Aura gets Nissan’s latest infotainment system featuring a 9.0-inch touch screen and an available 12.3-inch digital gauge cluster. It also gets the newest version of the Bose Personal Plus audio system, which now gets speakers on both front seat headrests. This iteration first appeared on the second-generation Juke for the European market. The older version found in the Kicks and fifth-generation Micra only has speakers on the driver’s headrest, reducing the speaker count to eight versus 10 on the new unit. Nissan’s ProPilot Assist semi-autonomous driver assistance feature appears to be an option on the Note Aura.

Nissan’s second-generation e-Power series hybrid system powers the Note Aura. Unlike most hybrids, which use the electric motor and gas engine for propulsion, e-Power only relies on the former to motivate the vehicle. The gas engine acts only as a generator in this layout, turning on only when it needs to create electricity for the battery and electric motor. According to Nissan, the total system output for the Note Aura is 134 hp and 221 lb-ft of torque. In addition to the standard FWD configuration, there’s also an AWD configuration that adds a second electric motor on the rear axle. This one is rated at 67 hp and 74 lb-ft of torque.

For small cars like the Note and the Kicks, Nissan uses a 1.2-liter three-cylinder gas engine as a generator. Larger vehicles like the upcoming Nissan Qashqai will use a 1.5-liter variable compression ratio turbocharged three-pot. The electric motor on the new Qashqai makes 187 hp and 243 lb-ft, more than either version of the Note’s powertrain. Expect the upcoming Rogue/X-Trail e-Power to have even more power since that will most likely get a dual-motor setup standard.

The result of a series hybrid setup like e-Power is essentially a battery-electric vehicle with a backup plan. You get the driving experience of an EV without the range anxiety. Additionally, Nissan has started adding the Leaf’s e-Pedal feature on cars with the e-Power system, enabling one-pedal driving.

If you’re looking to buy a Nissan Note Aura, you’re going to need to move to Japan. This luxe version of the attractive subcompact hatchback is exclusive to Nissan’s home market and will be available in both FWD and AWD configurations.