What is Nissan’s e-Power hybrid system and how does it work? 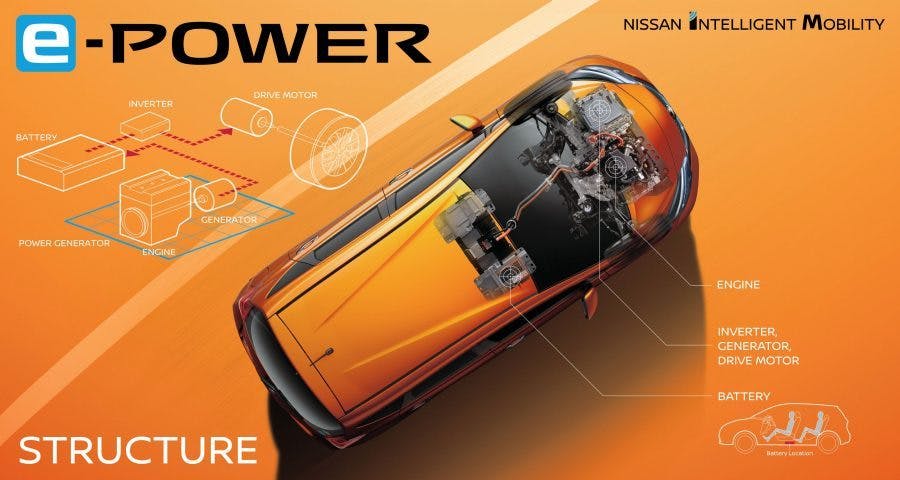 There are a lot of different types of hybrid systems out there. Toyota has its own proprietary parallel hybrid setup, Hyundai Motor Group, and European automakers use a more conventional layout with a geared transmission, and others use a system that’s biased toward using the electric motor more often. Nissan has been using its e-Power hybrid system in global markets since 2017 when it first saw duty in the Japanese market Note hatchback. There are now multiple versions of e-Power and it’s finding its way into more vehicles with the refreshed Kicks, new generation Note, and the upcoming Qashqai for Europe. What makes this electrified powertrain different from other hybrids? We’ve got a whole rundown just on that.

Nissan’s e-Power system is an example of a series hybrid. This is a type of hybrid powertrain where the internal combustion engine works solely as a generator. That means only the electric motor is responsible for motivating the vehicle while the internal combustion engine charges a small battery usually around 1.5- to 5.0 kWh depending on the application. As a result, you get the driving experience of a battery electric vehicle and the long-range of a hybrid. You get instant acceleration from the electric motor when you put your foot down, no more waiting for the engine to assist in turning the wheels.

Originally debuting with a single-motor configuration, Nissan has since created an AWD version of its e-Power hybrid system by adding a second electric motor on the rear axle. Like before, the two electric motors are backed by a lithium-ion battery, which is charged by a gas engine generator. Unlike a mechanical AWD system, the e-Power system doesn’t have a drive shaft linking the front and rear axles. Instead, one electric motor powers each axle and they’ve been tuned to provide maximum traction when road conditions call for it. Two-motor flavors of Nissan’s e-Power system usually offer more power, too. NISMO versions of the previous generation Note used this configuration along with a host of suspension and steering tweaks to create a sporty hybrid subcompact hatchback.

The type of gas engine used as a generator varies depending on the size of the vehicle. In the Japanese market Kicks e-Power and the new-generation Note hatchback, a 1.2-liter naturally-aspirated three-cylinder is used to back up the electric motor(s). In the Kicks, the electric motor used makes 127 hp and 192 lb-ft of torque. The new Note, on the other hand, is rated at 114 hp and 206 lb-ft in single-motor configuration.

Europe will finally get Nissan’s e-Power hybrid system when the next-generation Qashqai arrives this year. Being a larger vehicle, Nissan scaled up the powertrain by adding a more powerful generator. In this application, a new 155-hp 1.5-liter variable compression ratio turbocharged three-cylinder serves as the generator charging the lithium-ion battery. The electric motor used in this application is also more powerful at 188 hp and 243 lb-ft; however, it appears the Qashqai e-Power will be initially FWD only. The Qashqai e-Power will also be the first Nissan hybrid to feature the e-Pedal system, which teaches drivers how to maximize efficiency using one-pedal driving.

Nissan hasn’t revealed much more about the latest iteration of its e-Power hybrid system but we wouldn’t be surprised if it also gained a dual-motor version for use in larger vehicles. In the U.S., the Rogue would be the prime candidate for a powerful AWD hybrid system, giving Nissan an efficient high-powered version to go head-to-head with the latest and upcoming crop of hybrid compact crossovers. Unlike most hybrid systems, which still use the internal combustion engine for motivation, Nissan’s would stand out from the pack because it operates like an EV with a backup plan.