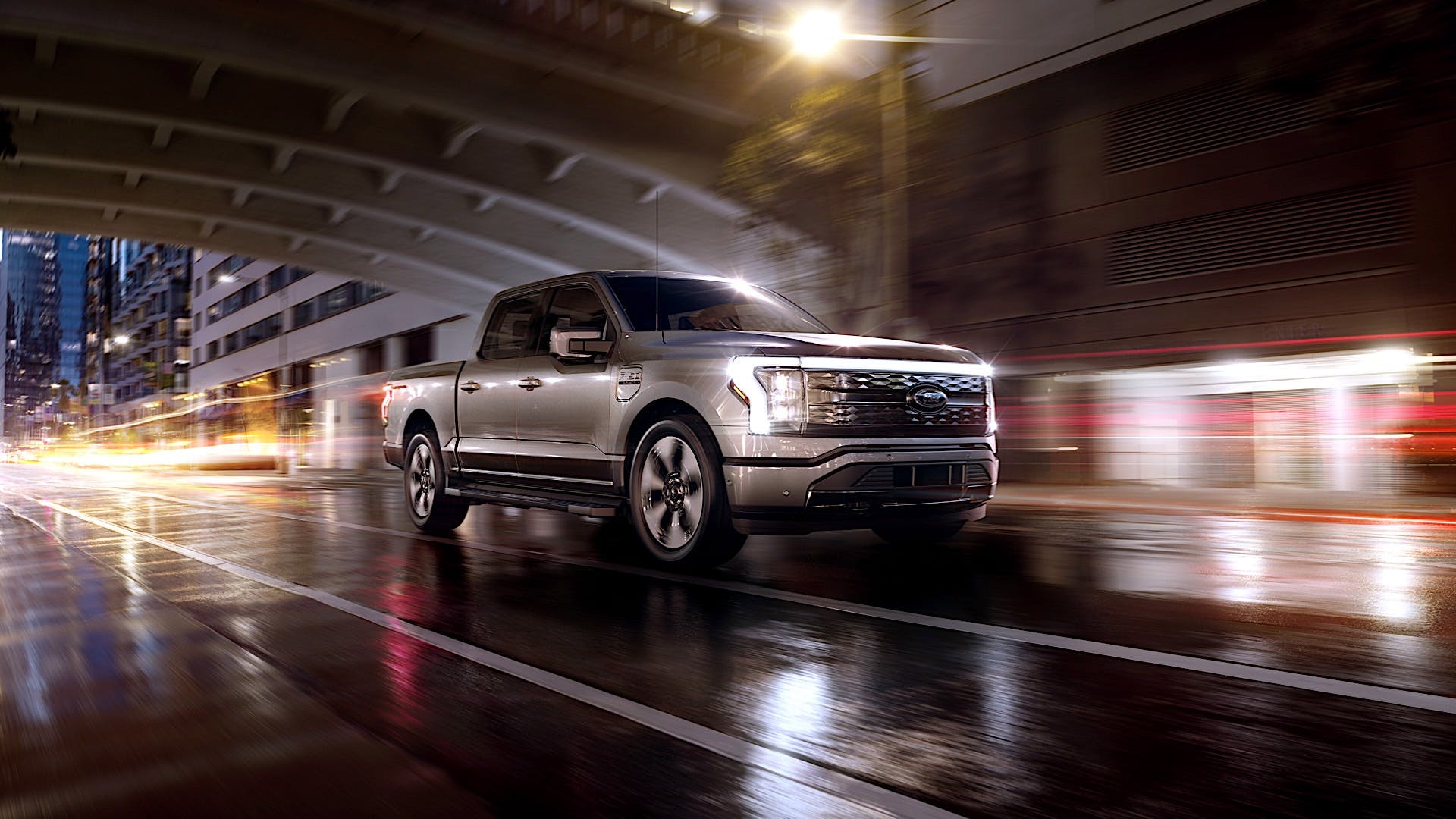 Up until today, there hasn’t been much movement in the afford EV pickup truck space. Products like the Rivian R1T that ships later this year is a premium product for a premium customer. But what if you’re an everyday person who wants a truck to do truck things but runs on electricity?

Meet the F-150 Lightning, and it’s a game changer.

Going on sale next year, and available to pre-order now for a $100 deposit, the Lightning blends everything that makes Ford pickup trucks appealing to the latest in battery electric technology.

All Lightning pickup trucks come in dual motor configuration, so all-wheel drive is standard. Trucks come standard with a 230 mile estimated range battery, while the long range battery can up that number to 300 miles.

The standard truck has 426 horsepower, and the extended-range battery has 563 horsepower. Both configurations make 775 lb-ft of torque.

Depending on configuration, buyers can spec a Lightning that has a payload of 2,000 pounds, or a maximum towing capacity of 10,000 pounds.

“The F-150 Lightning is a massive moment for our Ford team. America’s No. 1 auto brand is going zero emissions with America’s favorite vehicle. It’s quicker than a Raptor, with standard 4×4 and independent rear suspension; a power frunk, enough juice to run your house for three days or power an awesome tailgate; and it will forever improve with over-the-air updates,” said Ford President and CEO Jim Farley.

All of the latest Ford truck technology is present, too. That includes optional built in scales to weigh the truck. That technology is combined with the GPS, current weather conditions, driving style, and other data points to provide a real time range estimate even while towing, to provide the most accurate estimate the company can get.

Additional Ford truck tech includes Pro Power Onboard. On the Lightning that’s up to 9.6 kW of power. That’s more than the 7.2 kW on the F-150 PowerBoost hybrid, and according to Ford can run a standard house for up to 3 days.

The Ford Intelligent Backup Power knows when the power goes out, and sends the power from the truck to the house. When power is restored, the truck is recharged.

That feature is part of a new 80-amp wall charger for home that can charge the extended range truck at up to 19.2 kW of power.

Speaking of home charging, a standard battery will take 10 hours to charge from 15%-100% on a 48-amp charger. It’s a little longer at 14 hours on a 32-amp charger. The new 80-amp charger doesn’t charge the standard range battery any quicker.

While DCFC will always vary based on conditions, Ford is anticipating an addition 54 miles of range after 10 minutes of charging on the long-range battery.

BlueCruise is also available, like on the regular F-150, so that on certain digitally mapped roads, as long as the driver is paying attention, they can remove their hands from the steering wheel.

The front trunk has approximately 400 liters of space, and can accommodate 400 pounds of payload. Ford says that’s enough for two carry-on bags and one checked bag, or two sets of golf clubs. Additionally, 2.4 kW of power is available up front for everything from power tools to televisions.

In the United States, there will be a commercial version of the truck that will be available for consumers. That truck starts at $39,974 before any federal or state tax incentives. The XLT trim starts at $52,974, and is moderately equipped as a base. More information on that $40,000 version is coming on the May 24.

For those that might be doing the math at home, that’s around the same range as the Cybertruck for the base truck, but the base Ford comes with a dual motor configuration and more towing and payload performance.

Also, the F-150 Lightning goes on sale in the spring.

It’s unknown how much profit Ford is going to make on each Lightning sold, but the extremely competitive M.S.R.P., which isn’t far off from the gasoline-powered trims, tells us Ford didn’t come to play. They came to win.

We can’t wait to drive it.