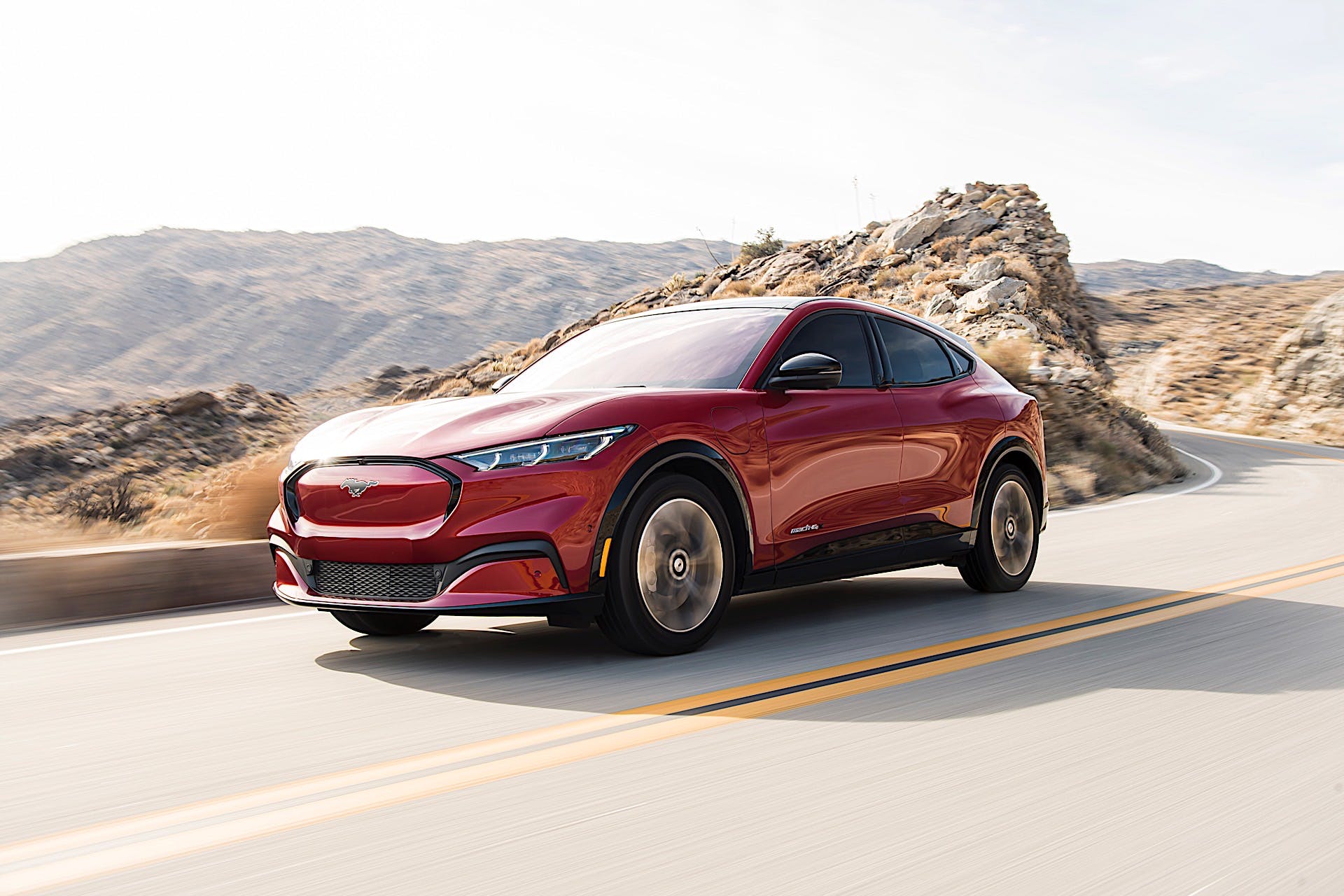 Most commenters on the internet — never read the comments — were outraged when Ford announced that its new electric crossover would carry the Mustang name. Surely a four-door, high-riding crossover with available all-wheel drive can’t be in the same family as a rear-drive, high-horsepower performance sports car. Or can it?

We spent the day recently trying to figure out exactly what the Mustang Mach-E, and while we have more questions we’d like to find answers to, the drive was quite informative. Ford is taking battery electric propulsion seriously, and the Mustang Mach-E is the closest competitor to the Tesla Model Y that I’ve driven yet.

Ford calls the Mach-E a crossover, and while it does sit a bit taller than a comparable Ford Focus, the proportions and ride height are still hatchback to me. But that’s OK, because it’s still easy to get in and out of, and the better aerodynamics help with performance and range.

Up front, the Mustang Mach-E has a long hood and aggressive slant on the LED headlights. The grille is body-colored, since a real grille isn’t necessary, and the Mustang horse is positioned right in the middle.

Around the side, black cladding around the wheel wells give it more of a crossover look, but the Mach-E still has the swollen haunches you’d expect from a muscle car.

Visually, the Mach-E looks like it is was of those coupe-crossover things, but if you look carefully the top of the roof is painted black.

CHECK OUT: Everything you need to know about the Ford F-150 EV

That’s because that while they are going for that look, they preserved more rear seat headroom than in other vehicles with the sloping roof line.

Around back LED taillights are standard, and have a similar three bar design to the Mustang coupe. The hatch is powered, and the relatively flat rear also features a big horse in the middle.

The Ford Mustang doesn’t say Mustang on it anywhere, and neither does the Mustang Mach-E. There is Mach-E all-wheel drive badging on the doors.

People recognize this vehicle when you are out and about, and more than one child did a double take when driving through the small towns around Ann Arbor.

Mustang or not, I think it looks the part.

Inside the Mach-E is one of the nicest Ford interiors I’ve been in.    The materials feel plush, with a design that feels minimalistic without going to the extreme of the Model Y.

Every single Mach-E gets the center-mounted touch screen with the knob built into the screen. This screen controls all of the functions of the vehicle, and there’s support for both wireless Apple Car Play and wireless Android Auto.

There are configurable driver profiles based on who is driving, preserving the settings of each individual in a multi-driver household. The satellite navigation is aware of the state of charge of the vehicle, and can route you to an available charging station along your route.

This trip planning functionality is something that Tesla has mastered, and if Ford delivers a similar experience, that would be excellent for helping those who might have range anxiety. We weren’t able to test that yet, and will when we have the vehicle for a longer loan.

A large, non-opening panoramic roof lights up the cabin on Premium models. There’s also a B & O audio system that sounds pretty solid.

The Mach-E comes with lane centering and adaptive cruise control. The lane centering system is the best I’ve experienced in any Ford, and mimics the basic Autopilot behavior of a Tesla. But unlike Tesla’s system, the Mach-E uses sensors beyond just cameras to be aware of its surroundings. That means you shouldn’t have nearly as many false braking events that you get in a Tesla.

Coming next year via a software update is the ability to drive the Mach-E completely hands-off on the steering wheel, similar to how Cadillac’s Super Cruise works. This will require a fee after a trial period, and we’re told that’s to continue to support new mapping and locations.

While “Full Self Driving” is a $10,000 option on Teslas, there is no monthly fee. Tesla’s system, though, is still hands on regardless of the name of the system or whether people on the internet actually follow the safety guidelines.

While we aren’t able to test it on this drive, the Mustang Mach-E supports up to 150 kW fast charging.

With the FordPass charging network, drivers can plug into a supported DCFC and start charging without having to have a separate account for each different type of charging network. Some stations, like Electrify America, even support charging the car without even having to verify an account with the station. Just plug in, and the car starts charging.

That’s similar to the Tesla Supercharging experience, and we look forward to trying that out at our EA station, which happens to be the closest charging network to our business.

Most of our time was spent in the Premium all-wheel drive model with the extended battery. Off the line, the Mach-E is quick to accelerate, but it doesn’t feel quite as brutal as a Model Y long range does.

Ford claims that the this particular test car should be able to go from zero to 60 mph in 4.8 seconds. We wanted to verify that.

I attached our Racebox Pro GPS logger to the car and ran a series of acceleration tests. Because of the impromptu nature of the testing, we were unable to determine quarter-mile times.

When don’t use a 1-foot rollout when calculating 0 to 60, because zero should be zero. That would likely explain the differences in timing here. View our performance testing methodology.

Steering is solid for an electric car. There’s obviously no feel to it, but it’s easy to point the car in the direction you want to go. Even with the stability control fully on, the Mustang will give you a little slip to play with.

It’s actually quite a bit of fun. The brakes inspire tons more confidence than the brakes in the Model Y (non performance), and the suspension seems better tuned for performance driving.

On the highway the Mach-E is quiet. It’s actually quieter than I expected it to be. The suspension is also much nicer over bumps than some other electric vehicles, so kudos to the engineers there.

It’ll be interesting to see what the GT version of the Mach-E will do, because as an everyday car that’s also fun, the Mach-E is good, but there’s always room for growth.

There’s so much more we want to test and try out, including the trip planning computer, the FordPass app, fast charging, and just generally living with it.

But, for a first taste it was a good one. The Mustang Mach-E delivers fun, solid technology, a good drive, and shows us that a future of Ford electrification is a bright one.