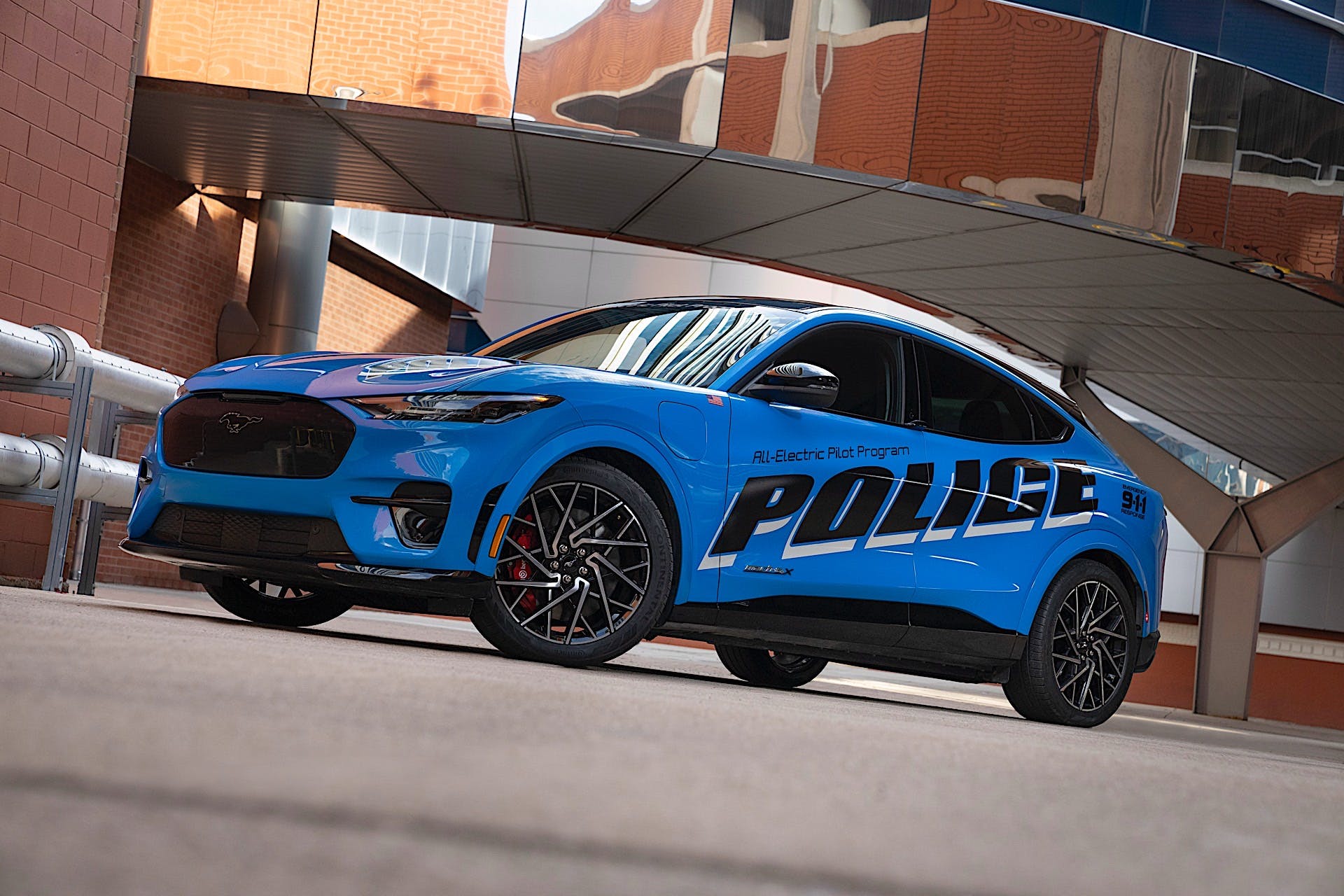 The Ford Mustang Mach-E has been submitted to the Michigan State Police for testing and evaluation. This is part of Ford’s $30 billion in electrification through 2025 and is exploring the possibility of building all-electric, purpose-built law enforcement EVs. To demonstrate its capabilities, Ford submitted an all-electric pilot vehicle based on the 2021 Mustang Mach-E as part of the Michigan State Police’s 2022 Model Year Police Evaluation, which will take place on Sept. 18 and 20.

Ford will use the pilot program as a bench mark while it continues to explore purpose-built EVs for law enforcement use. This isn’t the first time that the Blue Oval has created a Mustang Mach-E police vehicle. Earlier this month, it built one for the United Kingdom’s police force. Law enforcement across multiple regions of Britain has already asked to put the crossover through a full evaluation.

The initial concept is a Mach-E Standard Range with AWD but Ford is planning to offer RWD and AWD models with the extended range battery for law enforcement duties in Britain. Its driving range isn’t compromised either because the blue light equipment draws power from the 12-volt battery and not the larger unit driving the vehicle. Safeguard SVP, a longtime Ford partner, did the conversion and added special mounting pods and brackets to the vehicle.

Unlike the prototype presented in Britain, the Mach-E that Ford submitted for testing in Michigan appears to be the high-performance GT model. That uses the larger of the two batteries and has 480 hp and 600 lb-ft of torque combined between its two electric motors. This allows it to hit 60 mph in 3.8 seconds. There’s also the Mach-E GT Performance Edition, which bumps torque up to 634 lb-ft and cuts the run to 60 mph down to 3.5 seconds. Performance Edition models also swap the standard GT’s all-season tires for summer rubber and add MagneRide magnetic suspension and Brembo front brakes.

Surprisingly, the additional power and go-fast goodies don’t come at a significant cost of driving range. The Mach-E GT and GT Performance Edition are rated for 270 and 260 miles respectively. Using a DC charger, the Mach-E can peak at rates of 150 kW, allowing the car to add 61 miles in 10 minutes or charge from 10 to 80 percent in 45 minutes. The Mustang Mach-E is also available with Ford’s Blue Cruise hands-free semi-autonomous driving system provided you get it with the CoPilot 360 Active package. This will allow you to drive hands-free on over 100,000 miles of roads dubbed hands-free blue zones. To make sure you’re paying attention to the road, Ford installed cameras facing the driver to monitor your eyes. The system also gives visual prompts on the instrument cluster to let you know when to take over.

By submitting the Mach-E to get evaluated for law enforcement use, Ford is continuing its history of providing vehicles for police forces across the globe. In the U.S., the Ford Crown Victoria is one of the most recognizable police interceptors whether you live in a big city or somewhere rural. The Explorer entered law enforcement duty when the previous generation crossover became part of police fleets across the country. With the entry of the Ford Mustang Mach-E, the Blue Oval aims to strengthen its ties with law enforcement by bringing them into the future with capable battery-electric vehicles that can meet their requirements.