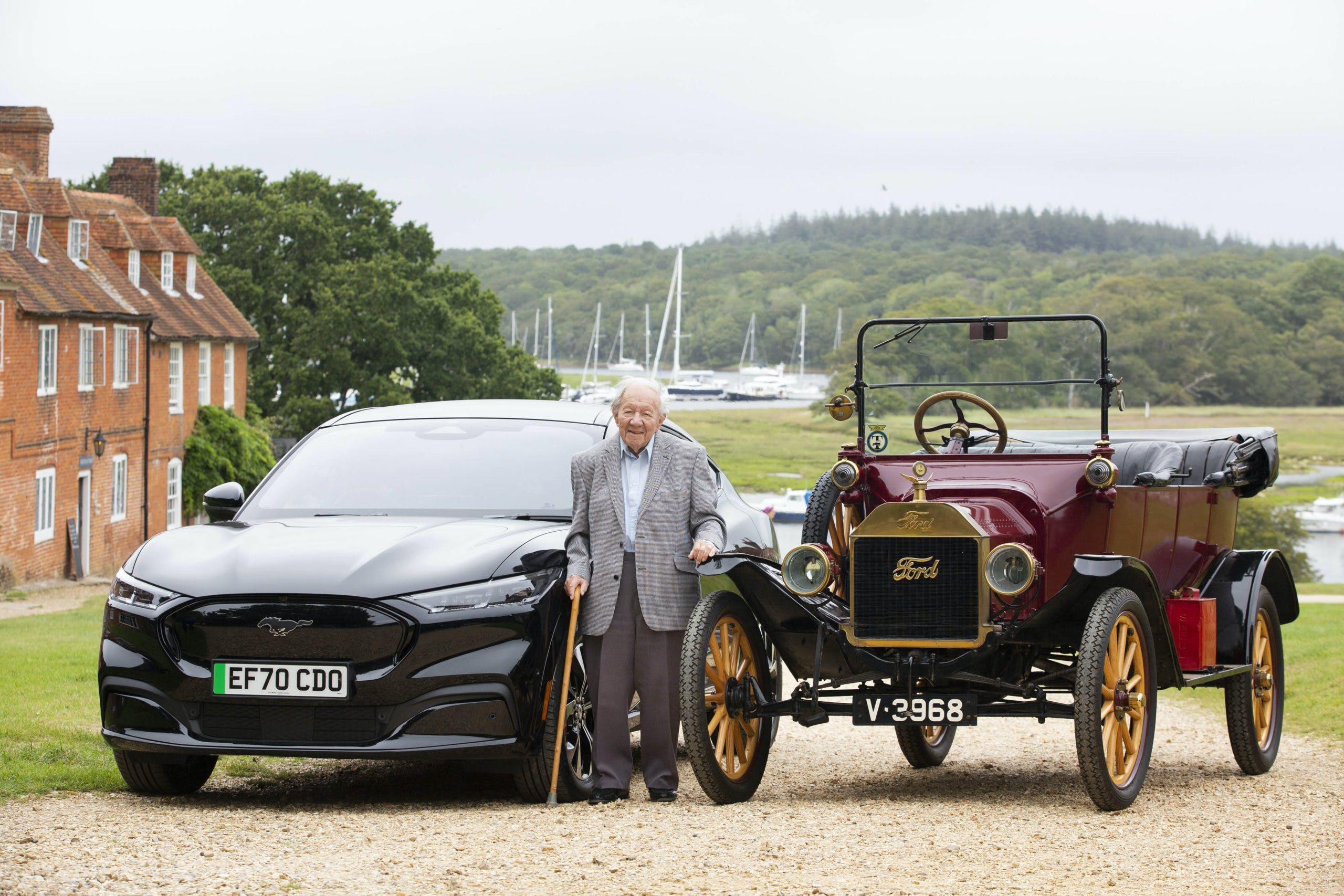 At 101 years old, Harold Baggott has seen a lot during his life. He was born in 1920, around the same time as the automobile started to gain prominence. The first time he drove a car was when he was 10 in his family farm’s milkman delivery float using a Ford Model T. Baggott eventually got his license in 1936, the first year they were introduced and got himself a Ford 8 Popular a year later for £100 and a Ford Anglia immediately after that. Roughly 85 years after getting his license, Baggott got a chance to drive a Ford Mustang Mach-E, to see what the future of motoring looks like.

Before test driving the Ford Mustang Mach-E, the Baggott family was already a loyal Ford customer. They’ve owned 20 vehicles from the Blue Oval for personal use. Their coach and travel business have a fleet of over 140 Ford commercial vehicles. Baggott noted that he is excited for his great-grandchildren, who are also interested in cars, to drive vehicles like the Mach-E and appreciate the quietness of the crossover. Prior to getting behind the wheel of the Mach-E, the Baggott family got rides in a 1915 model taken from Ford’s heritage collection. Mr. Baggott was reminiscing of the early days of driving the Model T that his family had.

“Since the age of 10, I’ve retained my interest in motoring and today find myself interested in the switch to electrification following the government phasing out the traditional combustion engines I’m used to,” said Baggott. “I have reminisced about my driving history with the Model T and seen what the future has in store. It was exciting to get behind the wheel of what I expect to see my great-grandchildren will be driving.”

The Mustang Mach-E’s popularity has skyrocketed since its introduction as a 2020 model. Although purists scoffed at a crossover being called a Mustang, the vehicle did its job and made consumers pay attention to battery-electric vehicles outside of Tesla. In the U.S., the Mach-E is now one of the bestselling EVs on the market and Ford hasn’t even rolled out the entire lineup. With a range of up to 305 miles per charge on the rear-drive California Route 1 Edition model, the Mach-E is a compelling vehicle for those wanting to go electric.

Later this year, Ford will release the Mach-E GT and GT Performance Edition as the two most potent models in the lineup. Despite their focus on going fast, the sporting iterations of the Mustang Mach-E still deliver generous range with the GT EPA-rated for 270 miles and the GT Performance Edition checking in at 260 miles. Both are rated higher than the more expensive EVs like the Audi e-tron while offering more power.

The fact that a Ford Mustang Mach-E endeared itself to a centennial who has owned internal combustion Fords for generations speaks volumes to the crossover’s appeal. It’s not simply a vehicle you get for basic transportation of eco-friendliness. Driving enthusiasts should welcome electrification because it significantly raises the performance bar thanks to its ability to deliver power instantaneously. Additionally, there’s less complexity involved in EVs, which minimizes maintenance by reducing the number of components involved in motivating the vehicle.