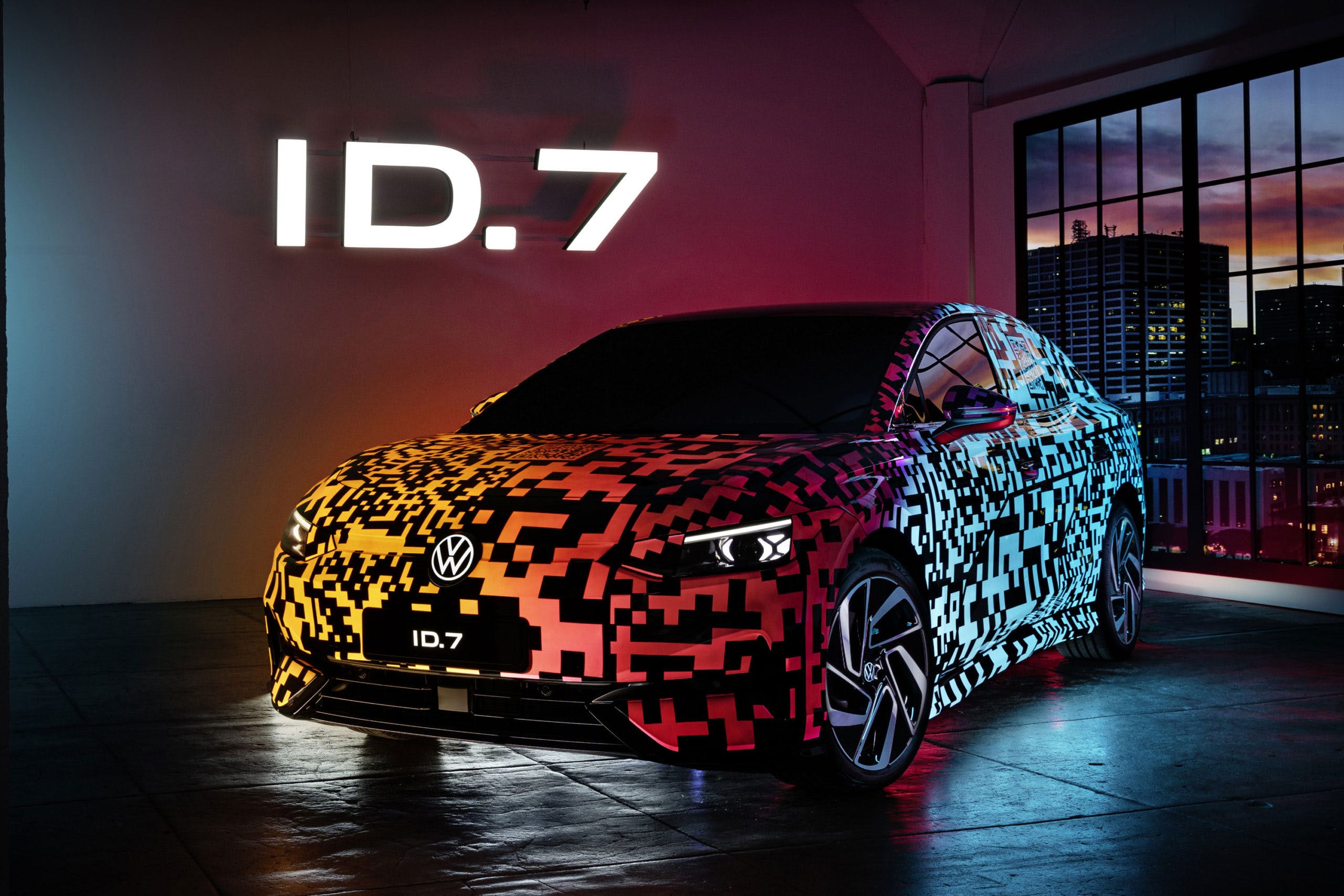 On Tuesday, Volkswagen revealed the new ID.7 all-electric sedan at CES in Las Vegas. This is the fist time the German automaker has attended CES in six years, so VW swung for the fences with this vehicle introduction.

The battery-powered ID.7 will be the sixth model in VW’s ID family, which also includes the ID.3 hatchback, ID.4 SUV, ID.5 crossover-coupe, China-only ID.6 and the retro-inspired ID.Buzz. This is the automaker’s first fully electric sedan and second global vehicle based on the Modular Electric Drive Matrix (MEB) platform, following the ID.4.

Since the ID.3 went on sale in September 2020, more than 500,000 MEB-based vehicles have been delivered worldwide. According to the automaker, they hit this milestone about a year ahead of schedule, even though they’re still battling global supply-chain issues.

At CES, the ID.7 is impossible to miss because it’s covered in a vibrant camouflage paint job that consists of at least 40 layers. Grabbing your attention, 22 sections of this vehicle finish can be independently illuminated. Cleverly, QR codes are also incorporated into the paint on the hood and body sides.

Stylistically, this VW’s design draws inspiration from the ID.Aero concept that debuted in China earlier this year. Of course, like other electric vehicles, the ID.7 features an aerodynamic design with a sleek front end and sloping, though awkwardly tall, roof. Slicing through the wind, this design should give the ID.7 impressive range. On the WLTP test cycle, VW is estimating this car should be able to go 700 kilometers (435 miles) on a single charge. Expect any EPA estimates to be appreciably lower than that.

Inside, this all-electric VW features plenty of technology including a 15-inch infotainment screen, an augmented reality head-up display and even illuminated touch sliders, something the ID.4 SUV has been criticized for lacking. Keeping up with the Jonses, or in this case, the Teslas of the world, the ID.7’s air vents are electrically adjustable.

There’s other smart tech in this car as well. For instance, you can control the heated steering wheel using voice controls, just say, “Hello, Volkswagen, my hands are cold.” Additionally, as the driver approaches with the key on their person, the car can preemptively activate the climate control system, turning on the heater or air conditioning system so the cabin is more comfortable.

One non-computerized feature passengers are sure to appreciate is the ID.7’s long, 116.9-inch wheelbase, something that should provide plenty of legroom. That number exceeds the discontinued North American Passat’s hub-to-hub span by about 6.5 inches, and that car already had a massive backseat.

CHECK IT OUT: Ford F-150 Lightning gets another price increase

“With the new ID.7, we are extending our electric model range into the upper segments. The sedan will offer top-class technology and quality,” said Volkswagen chief executive officer, Thomas Schäfer, in a media release. Despite the seemingly unending popularity of SUVs these days, VW still wants to have a balanced vehicle lineup. Schäfer noted, “[Our goal is] to deliver suitable products for our customers in every single segment.”

The ID.7 is one of 10 different electric vehicles the VW brand plans to launch by 2026. At this point, availability and pricing information for this car has not been announced, but this sleek, all-electric sedan could start arriving at dealerships in 2024. The car is expected to be offered in the automaker’s major global markets, that is, China, Europe and North America.