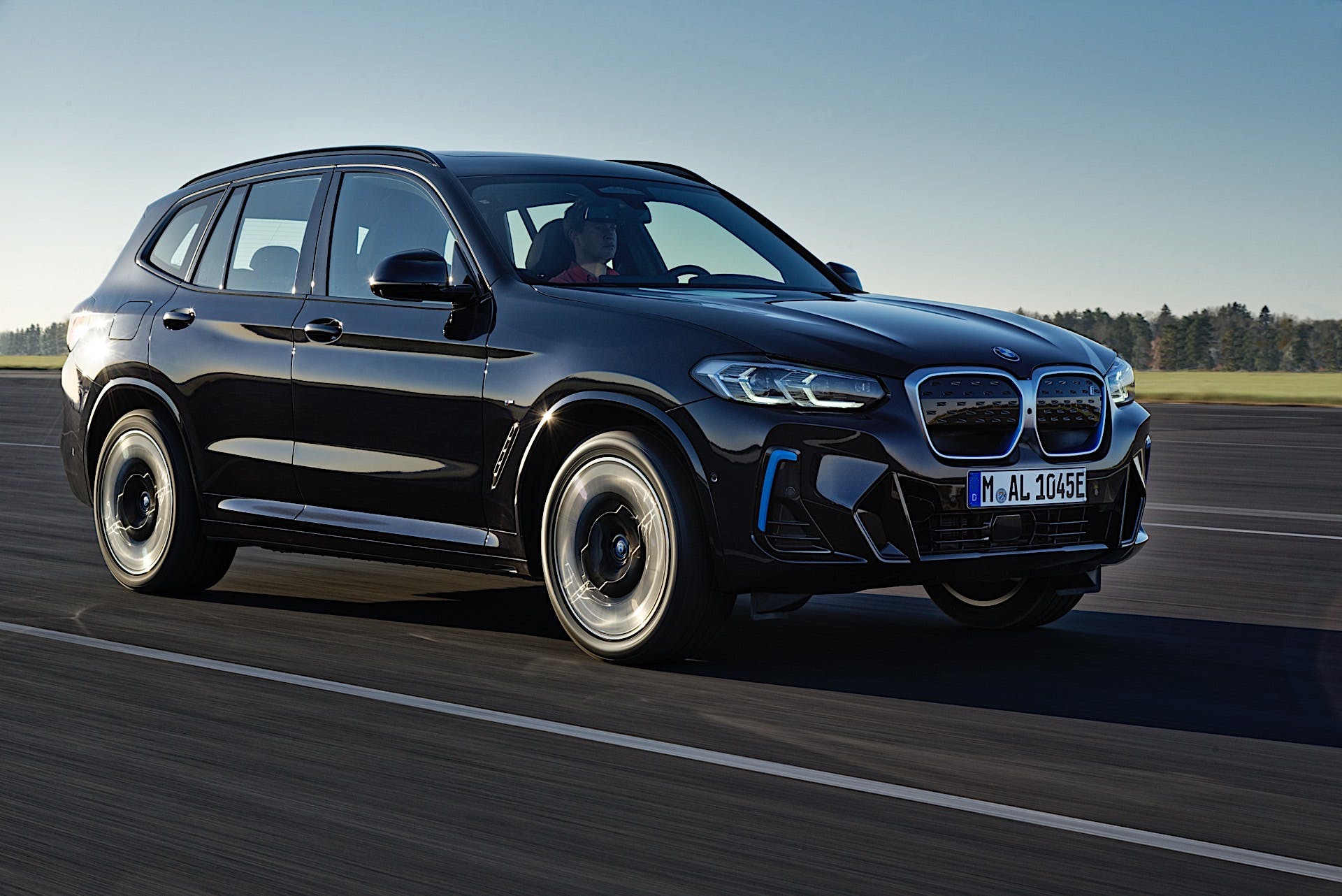 The updated BMW iX3, an all-electric version of the X3 crossover, has been unveiled ahead of its official debut at the 2021 Munich auto show. You’ll need a magnifying glass to see all the changes to the exterior because they’re extremely subtle. The biggest changes are larger faux kidney grilles and thin LED headlight clusters. In the rear, you get three-dimensional LED taillights to further distinguish the iX3. Additionally, you also find generous swathes of blue accents in the lower front fascia and the back of the crossover.

BMW has made the M Sport package standard on the iX3. It gives the crossover a different front fascia with larger openings on the lower front fascia and 19-inch alloy wheels standard. New aero-optimized 20-inch alloy wheels are now offered on the BMW iX3. Adaptive LED headlights are also standard with laser lights are optional. Additional standard equipment includes a 12.3-inch digital gauge cluster along with a new control panel on the center console for the iDrive interface and other vehicle functions. The seats are now upholstered in the Sensatec leatherette upholstery and complemented in the dark aluminum rhombicle trim with blue accents.

Power comes from an electric motor with 286 hp and 295 lb-ft of torque backed by an 80-kWh battery pack. Unlike its competitors, the iX3 is rear-wheel drive only for maximum range. BMW says the iX3 can hit 100 km/h (62 mph) in 6.8 seconds. The electric motor is also integrated into a single housing together with the single-speed transmission and power electronics. Charging rates peak at 150 kW allowing the crossover to gain 100 km or 62 miles in 10 minutes using a DC charger. BMW designed the iX3’s electric motors with minimal use of rare-earth metals and monitors the acquisition of cobalt and lithium for the batteries. It will also manufacture the vehicle and its components at facilities powered exclusively by renewable energy. On a full charge, the iX3 is capable of traveling up to 460 km or 286 miles per charge on the WLTP cycle.

When it goes on sale in Europe, the iX3 will be available in two flavors. The Inspiring grade gets adaptive suspension, metallic paint, a power tailgate, three-zone climate control, power-operated front seats, a panoramic sunroof, and a sport steering wheel. Moving up to the Impressive grade adds a head-up display, leather upholstery, 20-inch alloy wheels, and a Harman Kardon audio system. BMW will also offer a wide range of driver assistance features including lane-keeping assist, steering assist, and adaptive cruise control. BMW’s virtual assistant and cloud-based built-in navigation are standard along with Apple CarPlay and Android Auto compatibility.

Unfortunately, for U.S. consumers, the BMW iX3 won’t be available here. The crossover was built specifically for China and Europe to meet tight emissions regulations. It’ll be some time before the North American market gets an all-electric compact crossover from BMW because the brand is currently focused on launching the larger iX and the i4 sedan. We will eventually see more electrified models from BMW but the rollout appears to be focused on putting out the flagship vehicles first before rolling down the lineup. By the time we get the iX3, it’ll likely be part of the next-generation X3 lineup and built at BMW’s Spartanburg, South Carolina plant.

Written by Stefan Ogbac
Follow Author
RELATED ARTICLES
BMW Concept XM is a polarizing glimpse of an upcoming performance SUV
BMW 2 Series Active Tourer survives for another generation with electrified powertrains
BMW accelerates battery development, solid state batteries to arrive by 2030
Which home charger or Level 2 charger should I buy for my Tesla?
RELATED ARTICLES
JOIN THE EV PULSE NEWSLETTER
Receive weekly updates on each of our electrifying articles.