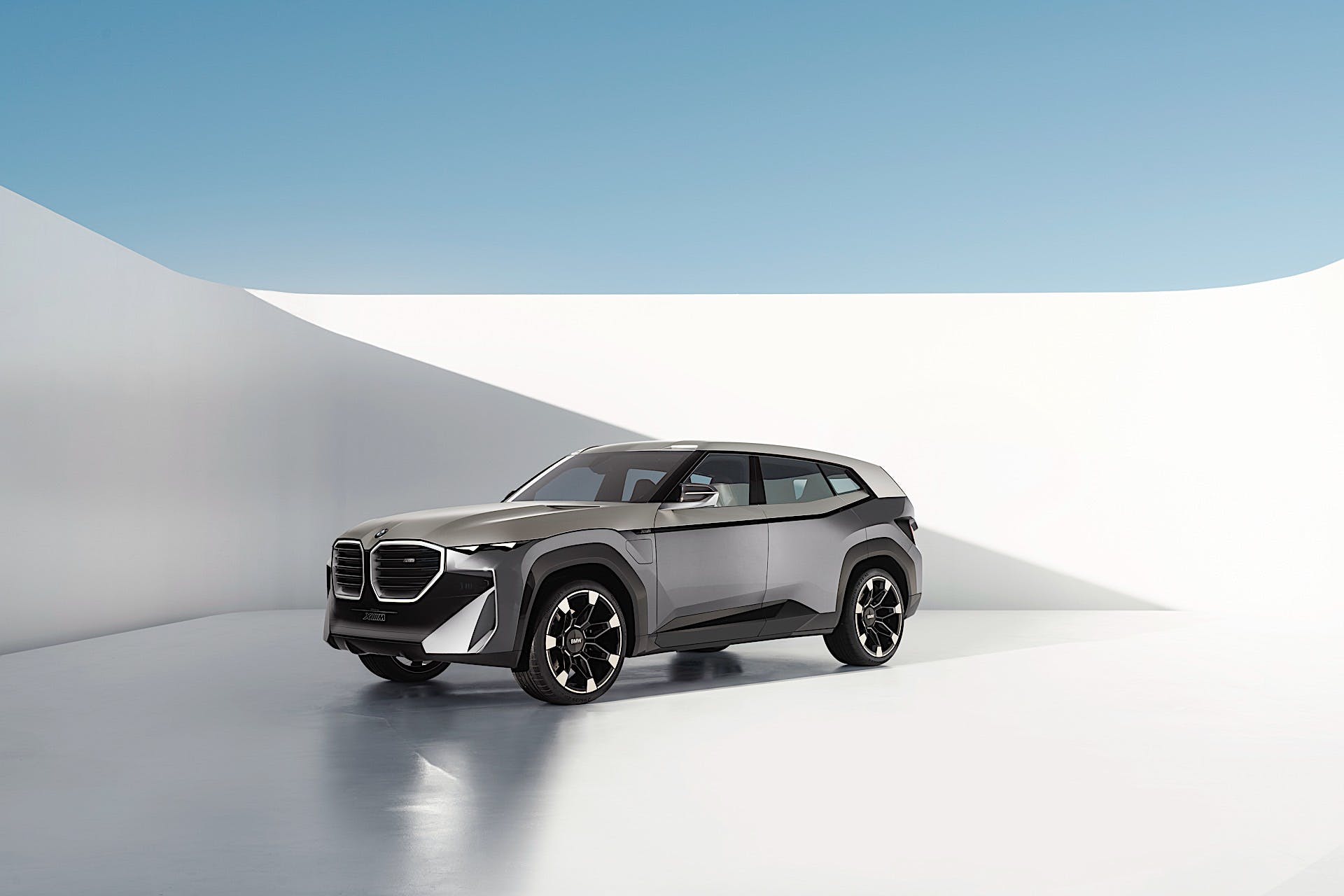 The BMW Concept XM is a thinly veiled show car previewing a production high-performance crossover of the same name. This high-riding plug-in hybrid won’t change much in looks meaning you’ll get that giant illuminated twin-kidney grille along, thin LED headlights and taillights, and massive openings on the lower front fascia on the production version. BMW kept an upright profile for the Concept XM instead of the coupe-like roofline you find on the X4 and X6. The C-pillar looks quite thick, which could suggest significant blind spots when looking to the rear. Neat design cues include stacked quad exhausts and BMW written on the center wheel caps instead of the corporate roundel. There’s also a BMW logo on the rear window as an homage to the iconic M1.

Powering the BMW Concept XM is a plug-in hybrid system coupling a V-8 engine with an electric motor for a combined output of 740 hp and 738 lb-ft of torque. BMW didn’t disclose the battery size but estimated the XM can travel up to 30 miles in all-electric mode. This will be the only powertrain offered when the crossover goes into production next year at BMW’s Spartanburg, South Carolina facility. It will also be sold exclusively as an M model.

Inside, the Concept XM features a driver-focused layout with a mix of brown and aquamarine upholstery. Only the upper part of the seat backs is finished in leather while the rest is trimmed in diamond-quilted velvet. The headliner has a cool three-dimensional prism-like pattern that illuminates via the interior ambient lighting. BMW also added deep pile carpeting with diamond quilting to extend the theme throughout the cabin. Carbon fiber with interwoven copper hints at the crossover’s performance-oriented nature and can be seen on the center stack and console. Red stitching on the steering wheel and center console adds more contrasting elements to the interior.

Like the iX and i4, the Concept XM features a curved display housing the digital gauge cluster and the main touch screen for the iDrive 8.0 user interface. The system features M-specific colors and gauges to distinguish it from the version found in other BMW vehicles. The knob and button controls remain for those that don’t want to use the touch screen. Expect the tech features in the Concept XM to stay intact when it transitions into a full production model. Based on what we see, the interior is essentially production ready since it has the same buttons, steering wheel, and tech features as upcoming BMW models like the iX and i4.

The BMW Concept XM will be the most powerful vehicle wearing the M badge to date and will be among the first to get an electrified powertrain. While the i4 is offered in M50 is technically the first electrified M model, it’s an M Performance vehicle, not a full-blown M car like the production XM and the new M3 Competition. As a result, the distinction of being the first electrified M car goes to the XM crossover, which was developed from the ground up with a plug-in hybrid powertrain. The production BMW XM arrives in the latter half of 2022, likely as a 2023 model. Its closest competitor will be the Porsche Cayenne Turbo S E-Hybrid.