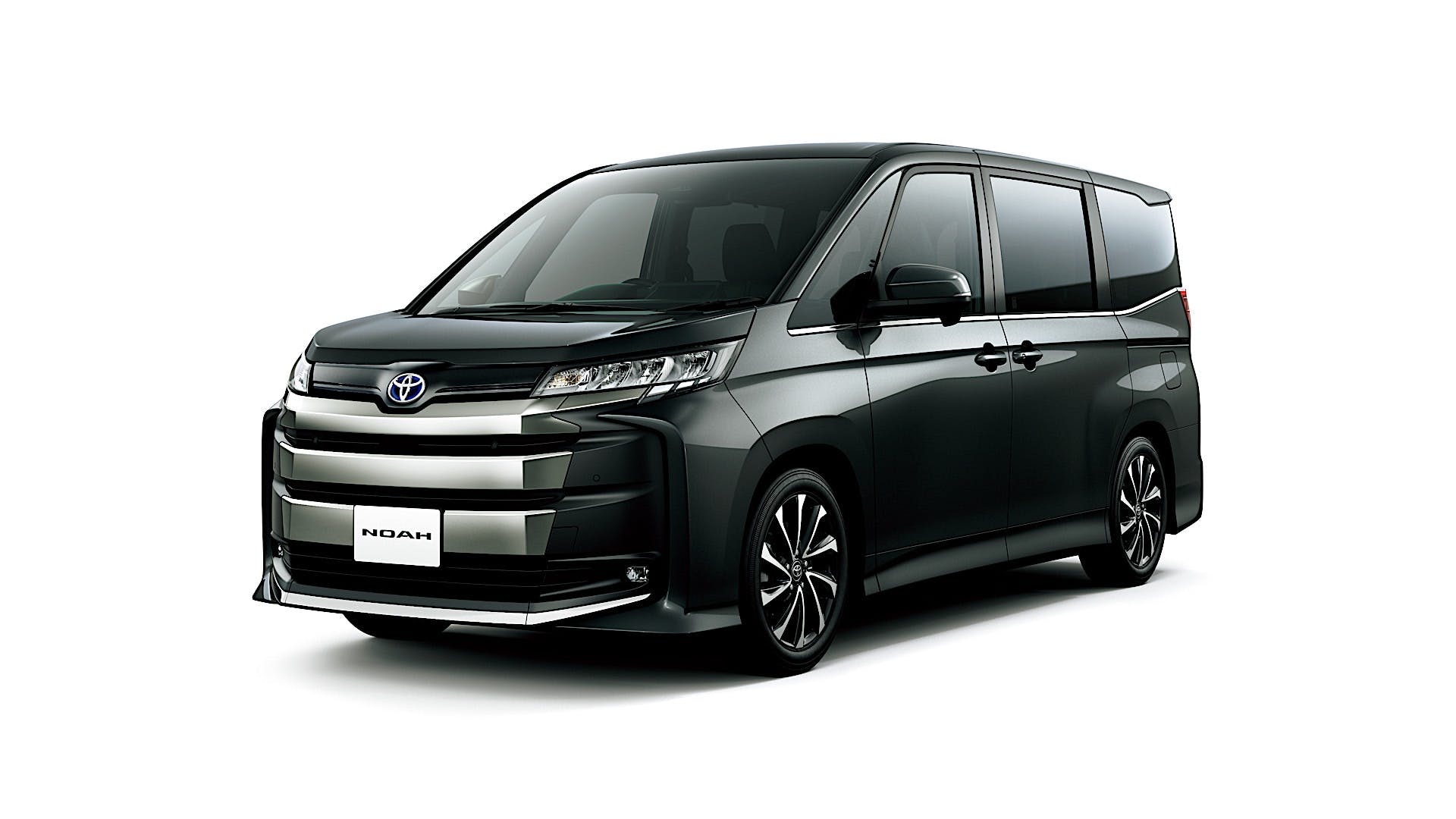 The new generation Toyota Noah and its mechanical sibling, the Voxy, have been revealed and they’re both available with an electrified powertrain. Both minivans are Japanese market models, making them forbidden fruit for most global consumers including those in North America. Although both are essentially tall, boxy haulers optimized for tight urban environments, it’s easy to tell them apart thanks to their unique grilles. The Noah gets either a chrome or body-colored grille with horizontal bars. On the other hand, the Voxy has a sportier look with its chrome surrounding a pattern that mixes a mesh look with five thin strips finished in the same color as the exterior.

Now on the TNGA-C platform shared with the Prius, Corolla, and C-HR, the Toyota Noah and Voxy possess stronger body structures and C-pillars that are better aligned vertically. Unlike its platform mates, the two vans get a torsion beam rear suspension instead of an independent multilink setup. They also feature an underfloor storage area that’s big enough to accommodate suitcases. Most versions will have seating for seven but you can also get a third-row bench, turning the Noah and Voxy into eight-passenger vehicles. Buyers can also configure the vans for easy wheelchair access. The seven-seat models get extras like a foldout table and heated second-row seats.

Regardless of how you specify your Noah or Voxy, they get the super long slide feature for the second row, something you also find in the Sienna for the North American market. For added convenience, Toyota has also made both vans available with hands-free power-sliding side doors and deployable side steps, the latter of which allow children to enter with more ease. The rear liftgate on both vans has a unique feature that allows you to stop it at a certain angle by simply pushing on it slightly.

The two minivans get the latest Toyota Safety Sense suite. They feature improved functionality like a front automatic emergency braking that can detect people, cyclists, and objects at intersections and parking lot speeds, evasive steering assist, and front cross-traffic alert. The system also includes lane centering, which helps keep you from drifting into another lane. Both the Noah and Voxy are also among the first Toyota vehicles to get Teammate, a semi-autonomous driver assistance system that first appeared on the Lexus LS 500h AWD. Teammate include automatic parallel parking, remote parking (hybrid exclusive), and improved adaptive cruise control.

Inside, you’ll find Toyota’s latest infotainment system with either an 8.0- or 10.5-inch main touch screen. Certain models also get a 7.0-inch instrument cluster display. The Noah and Voxy are also getting Wi-Fi hot spots to keep the minivans connected. Toyota has also enabled over-the-air updates on both vehicles to keep them fresh over their life cycle.

Hybrid variants of the Noah and Voxy use Toyota’s fifth-generation hybrid system. Unlike the version found in the European market Corolla Cross Hybrid, the minivans retain the same 1.8-liter four-cylinder that’s currently in use on the Prius and Corolla Hybrid. Toyota says that the electric drive motors and battery output have been increased but didn’t reveal the combined output of the updated system. It also promises better efficiency thanks to the improved hybrid system.

In addition to the standard FWD configuration, you can get the Noah and Voxy with AWD. Like in other Toyota hybrids, the minivans use an e-AWD system that adds a second electric drive motor on the rear axle. Like in the European market Corolla Cross Hybrid, the output of the rear electric drive motor has been increased, expanding its range of operations. Currently, small Toyota and Lexus hybrids with AWD like the Prius and UX 250h use a 7-hp unit in the rear that only operates up to 43 mph. The more powerful electric motors allow for better control and distribution of torque on all four wheels, allowing the vans to handle better and have more traction and stability, especially in bad weather conditions.

Unfortunately, the Toyota Noah and Voxy are exclusive to the Japanese market where small vehicles are in high demand due to road conditions and congestions. Don’t expect these to make their way to other markets anytime soon. If you’re in the U.S. and want a Toyota minivan, your only choice is the Sienna, which comes with a hybrid powertrain as standard.