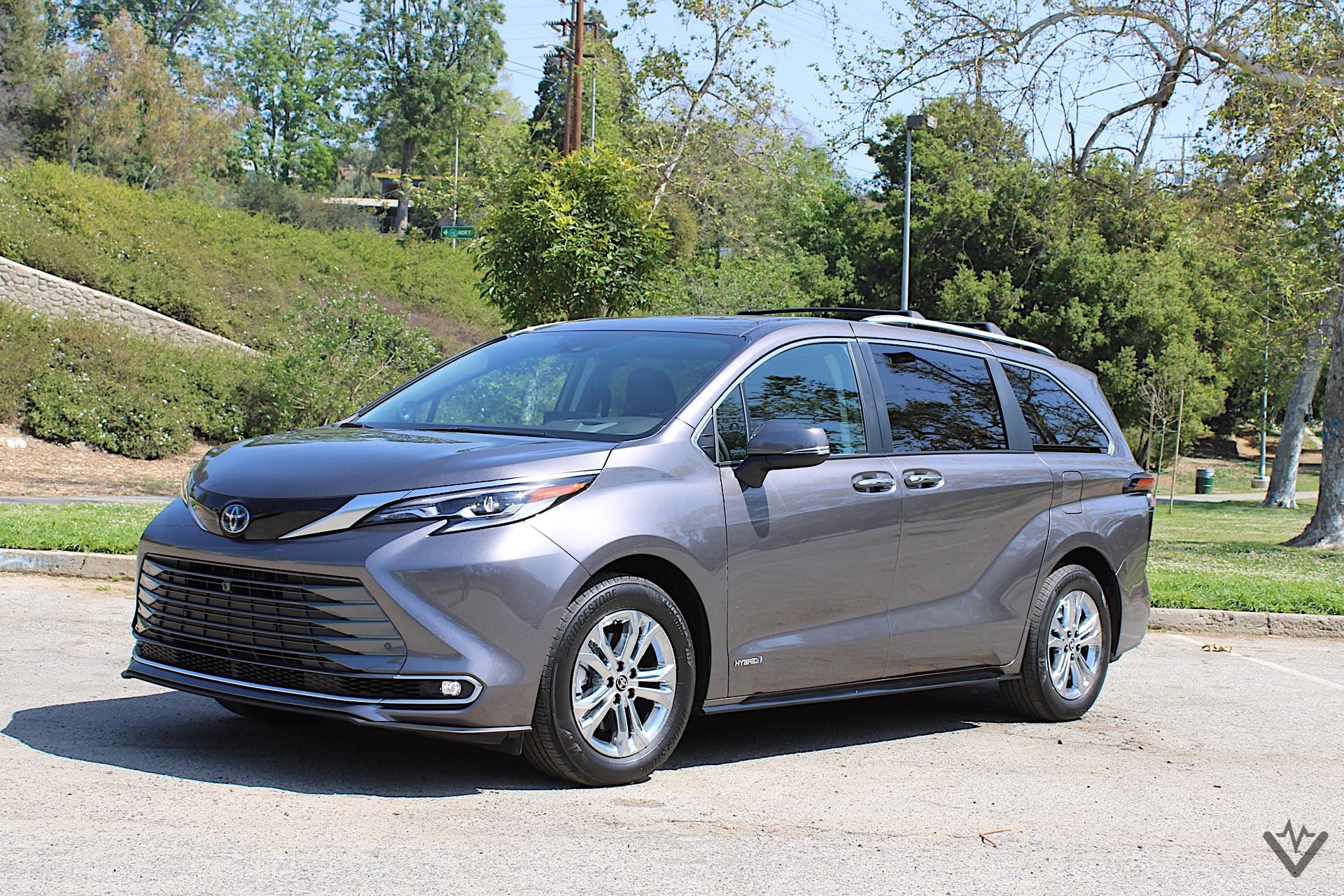 The Toyota Sienna is a mainstay among families looking for dependability, roominess, and versatility. With the latest generation, Toyota wants you to see this as more than just a box on wheels. The 2021 Sienna aims to be your stylish yet practical people mover that can handle foul weather while still excellent fuel economy with its electrified powertrain. Does this imposing rig succeed? Let’s find out.

You’re not mistaking the 2021 Toyota Sienna for any other minivan despite its familiar boxy shape. The front fascia alone stands out thanks to the massive grille and thin headlights giving it the Toyota family look. In the rear, you find the same design theme for the taillights as you’d find in the Camry complete with a curved black accent strip. There’s even a mini duckbill just below the rear window. From the side, you find lots of creases and cool reflections created by multiple character lines.

If you’re looking at a minivan, chances are you want to use it to carry people and gear. Thankfully the 2021 Sienna can comfortably seat seven passengers or up to eight depending on the configuration. Even with all rows up, there’s a lot of cargo space thanks to the massive tub that the third-row folds into with one pull. Dropping the third row gets you a flat floor and a squared-off load space, perfect for big bulky items. Pushing the second row to the front adds even more cargo volume. Unfortunately, you can’t remove the middle seats because they have side-mounted air bags in them.

The 2021 Sienna’s interior is cleverly packaged with lots of thoughtful storage solutions. In front, the minivan adapts the tray integrated into the dash found in the RAV4 and Highlander. This time, it’s wider and connected with the center console bridge, which has four cup holders and a neat phone holder behind the gear selector. There’s also a deep storage area in the center console and a small cubby for a purse or small bag under the shifter.

One of the highlights of the Toyota Sienna’s interior is the fit and finish. You get premium vibes the moment you’re inside, especially in our Platinum trim test car. Generous swathes of soft-touch plastics and padded surfaces with smooth graining add a sense of sophistication. Operating the knobs, buttons, and switches feel satisfyingly tactile, something you don’t expect from a utilitarian family vehicle. However, the sound deadening could be better because there’s a noticeable amount of wind noise at highway speeds.

Toyota’s latest infotainment system has simple controls and it’s more responsive than before. The unit with the 9.0-inch touch screen, which is standard on the 2021 Sienna, is the most intuitive version because all the controls are logically laid out and have minimal submenus. You can also configure the Homepage, allowing you to put frequently used functions front and center. The optional 12-speaker JBL audio system is one of the better units, offering crisp sound, and covers the cabin evenly. Seven USB-A and USB-C ports and a wireless charging pad should keep everyone’s devices juiced while a 1500W inverter can power small appliances. There’s also an available rear-seat entertainment system so the kids can watch movies during long drives.

The Toyota Safety Sense 2.0 driver assistance suite is standard on all Sienna models. Lane-keeping assist prevents you from drifting into another lane with gentle steering inputs and can help you take gentle turns on roads with clearly marked dividers. As with most Toyota models, the adaptive cruise control component is conservatively calibrated. When the vehicle ahead moves, the system waits a couple of seconds before getting on the way. Braking happens earlier even when you leave distancing in its closest setting. On the move, there’s more than a car length between you and the vehicle you’re following even in the closest distance setting.

One of the first things you’ll note about the Toyota Sienna on the road is just how comfortable it is. Road imperfections are absorbed promptly, keeping them out of the cabin. The Sienna’s cushy ride doesn’t sacrifice composure either; vertical motions over big bumps are kept in check, preventing it from feeling like you’re on a bouncy house on wheels. Body roll is well controlled, too, adding to the car’s confident demeanor. Steering, while accurate, veers on the slow side so don’t expect to throw the Sienna around like it’s a small vehicle.

For this generation, the Toyota Sienna is powered exclusively by a hybrid powertrain shared with several vehicles including the Camry, RAV4, Highlander, and Avalon. This couples a 2.5-liter four-cylinder with one or two electric motors depending on the drivetrain configuration, a nickel-metal-hydride battery, and a planetary gear set. The total system output is 245 hp. Thanks to the electric motors’ instant torque, the Sienna moves respectably despite its 4,725-pound curb weight. It’s not quick by any means but it won’t struggle when you point it up a hill or during passing maneuvers.

Regenerative braking easily recharges the Sienna’s battery. In AWD models, the second electric motor mounted in the rear axle further speeds up energy recuperation. Transitions between regenerative and mechanical braking are smooth in most driving situations. However, it can get a little grabby when you need to dig deeper into the pedal during hard stops.

All of the improvements made on the 2021 Toyota Sienna has culminated into a well-rounded family vehicle. The spacious, smartly packaged interior has a plush atmosphere while still retaining most of the flexibility you expect out of a minivan. Although the Sienna lost the removable second row, there’s still enough practicality there for most consumers. Together with the significant efficiency improvements (up to 36 mpg across the board for FWD models), Toyota’s latest minivan has become a stronger proposition.