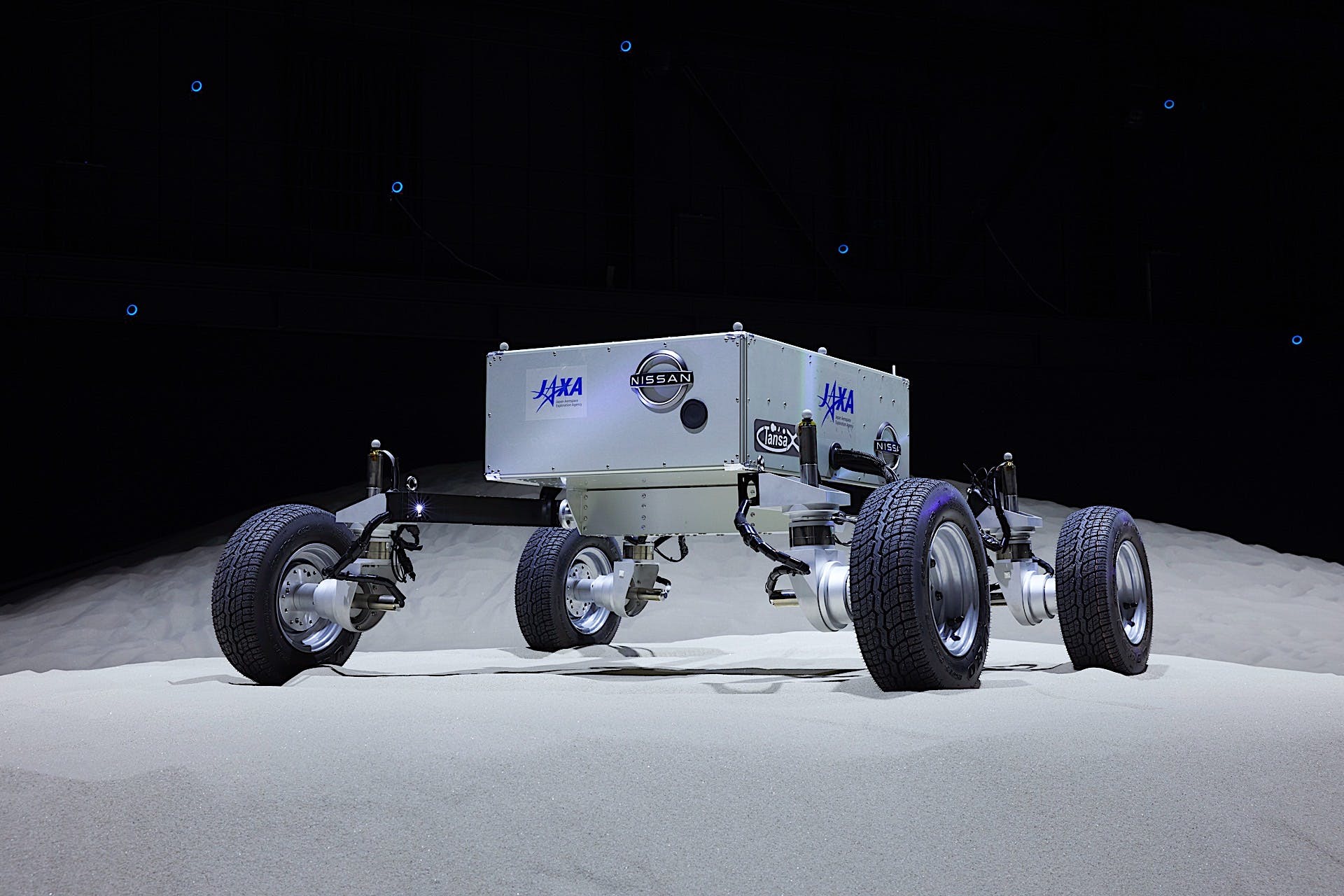 Nissan and Japan Aerospace Exploration Agency (JAXA) have revealed a new lunar rover prototype. What’s so special about this one? It uses technology taken from Nissan’s road cars, the most prominent one being the new e-4orce AWD system in the Ariya, which is said to help the lunar rover perform better on tricky terrain. This project is part of the JAXA’s Space Exploration Innovation Hub Center’s research on lunar rovers, a key component for space exploration. They must be able to traverse the moon’s uneven terrain, which is powdery, rock, and has undulating surfaces. Additionally, energy efficiency is crucial because there’s less fuel regardless of the type in space.

Nissan and JAXA have been working on the driving controllability of lunar rovers since Jan. 2020. The automaker’s research in this field applies motor control technology it developed for mass-market battery-electric vehicles like the Leaf and the Ariya and applies it to lunar rovers. Its e-4orce AWD system is particularly crucial because of its ability to boost performance over different types of terrain.

A key feature of Nissan’s e-4orce system is the precise independent control of all four wheels to give the driver more confidence over varying road conditions. Nissan’s work with JAXA is enabling it to improve its e-4orce AWD system’s performance in sandy terrain. By minimizing the amount of wheel spin in accordance with surface conditions, it lowers the chances of digging the vehicle into the sand. The automaker’s work with JAXA aims to contribute to the technological evolution of automotive and space exploration technology by sharing knowledge gained by working in both fields and collaborating with JAXA.

Toshiyuki Nakajima, General Manager of Nissan’s Advanced Vehicle Engineering Department in charge of the development of e-4orce, noted that this partnership will help the company make strides in vehicle development, especially in terms of performance.

Ikkoh Funaki, Director of the Space Exploration Hub Center at JAXA, on the other hand, describes the research as a collaboration with the potential for commercialization and further innovation. “By conducting research with Nissan, which has expertise in electrified technologies, we hope to apply our findings to the development of higher-performance lunar rovers,” added Funaki.

The 2023 Ariya is the first vehicle in the U.S. to feature Nissan’s e-4orce AWD system. It uses two electric motors making a combined output of 389 hp and 442 lb-ft of torque. Each motor’s torque can be controlled individually to provide traction when accelerating. The level of regenerative braking can also be adjusted individually between them when slowing down. During braking, e-4orce minimizes the amount of dive and other body motions. When cornering, the torque of both motors and the braking performance of all four wheels are precisely managed to achieve smooth handling.

Arriving in late 2022, the 2023 Nissan Ariya will be available in long-range guise first, featuring an 87-kWh battery. Single-motor variants will have 238 hp and 221 lb-ft. The only way to get one with e-4orce AWD is to splurge for the Platinum+ grade, the most expensive version costing $60,125. It also has the shortest driving range at 265 miles per charge. Venture+ variants are the most attainable Ariya at $47,125 and can travel the farthest on a single charge at an estimated 300 miles.