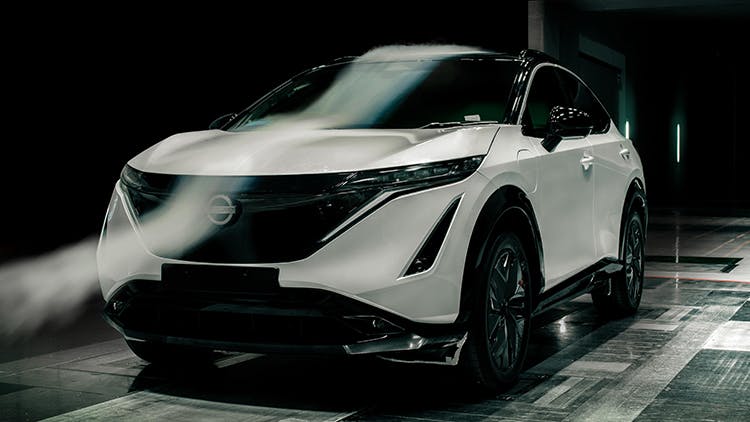 The 2022 Nissan Ariya is undergoing the final phase of testing and part of that is putting the car in a wind tunnel. Improving a car’s aerodynamics is crucial to help the car cut through the air as efficiently as possible. A vehicle with minimal resistance to aero forces well is also more efficient because it doesn’t have to work hard to withstand them.

Sarwar Ahmed, an aerodynamics engineer at Nissan’s European division, says that aerodynamics and reducing drag are even more crucial for electric vehicles. During high-speed driving, most of an EV’s power would be used to break through the air. That means every surface of a vehicle must be as streamlined as possible to minimize the strain on the powertrain.

Testing a car’s wind resistance is crucial because it allows automakers to test how well a design can push through the air. “During the early stages of vehicle development, Nissan will have more than one styling concept,” according to Sarwar. “We use the wind tunnel to provide feedback on what initial features or concepts work better or worse for aerodynamics. This begins by defining the proportions or the general shape of the vehicle, a stage where there can be quite significant changes.”

Sarwar also points out that wheels and tires contribute to a third of the drag. He notes that wheel deflectors can help improve airflow around the tires. Active grille shutters can create a massive improvement to a vehicle’s aerodynamics. Even the position of the side mirrors can affect the overall drag coefficient. Using computer analysis, engineers can find areas of low pressure, which can compromise aerodynamics. To address that, the positioning of the side mirrors gets modified to minimize drag.

To get accurate data on a vehicle’s aerodynamics, the wind tunnel’s floor sucks out air and allows the wheels to move to simulate driving on a road. Sarwar points out that aerodynamic testing is becoming more important as electrification becomes the norm. As a result, the Nissan Ariya will be the most aerodynamic crossover in the brand’s lineup.