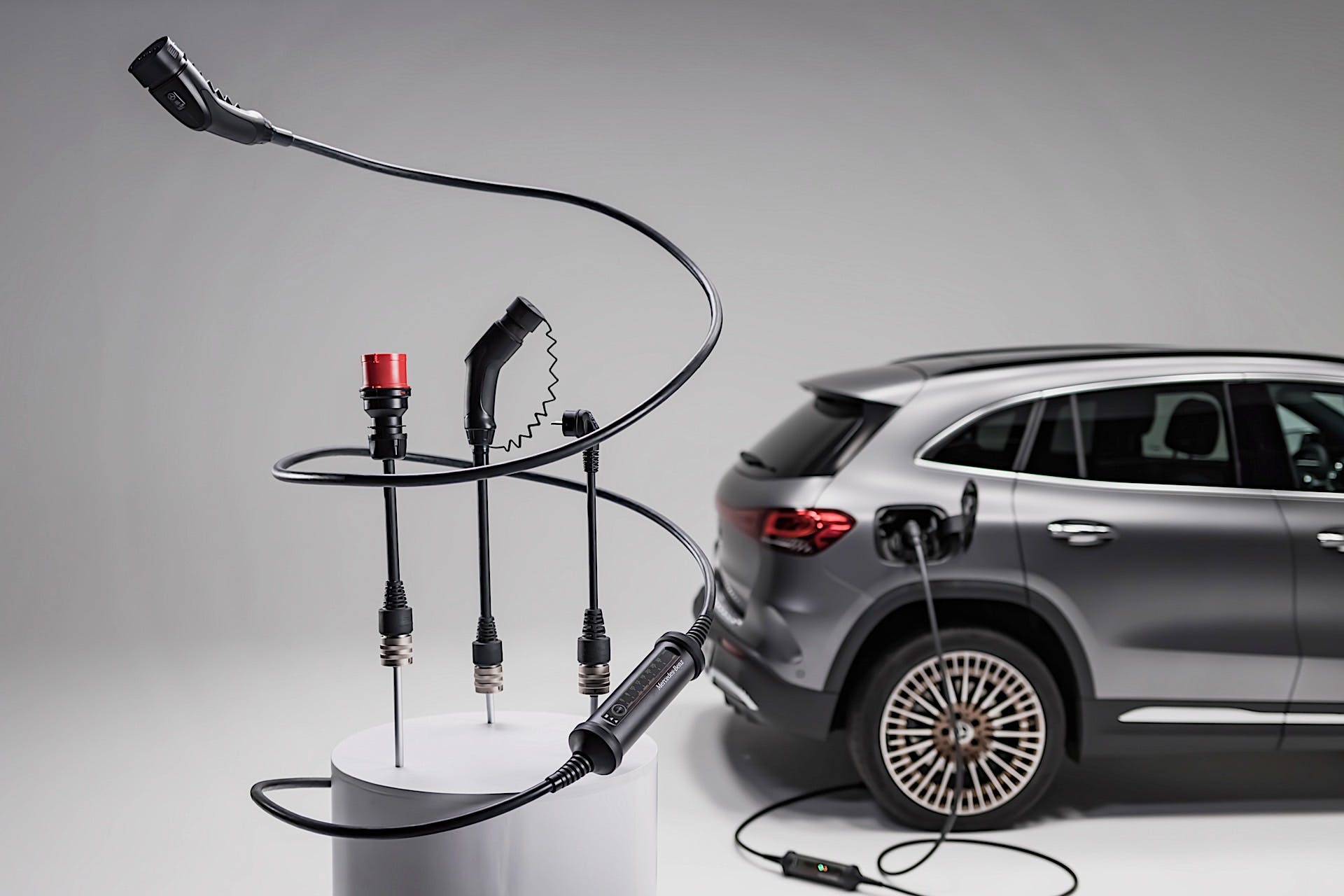 Mercedes-Benz has revealed a new charger tailored specifically for consumers who drive battery-electric vehicles or use the EV mode in the plug-in hybrids extensively. Called the Flexible Charging System, Mercedes says that this charger is compatible with all of its current and upcoming battery-electric and plug-in hybrid vehicles. An integrated type 2 connector can be used on all European-spec Mercedes vehicles and has multiple adapters that you can attach to the separation point.

The Flexible Charging System can detect which adapter you’ve attached to it and adjust the power flow accordingly. This charger maxes out at 22 kW but the owner can also change it manually if needed. It also features an integrated temperature sensor to protect against overheating. Mercedes says that its charger won’t break if you drive over it with something that weighs up to 1.1 tons. The Flexible Charging System is also IP67-rated for waterproofing meaning it won’t get damaged if it’s submerged for a short period. The integrated circuit breakers have been designed to withstand temperatures between -30 degrees to 50 degrees Celsius. That converts from -22 degrees to 122 degrees Fahrenheit. The total length of the cable is 16.4 feet. Mercedes will also make different plug types used across the world available as accessories.

With electrification spreading across the industry and its lineup, Mercedes-Benz picked the right time to offer its charging cable. In Europe alone, the brand will have four battery-electric models available by the beginning of 2022: the EQA, EQB, EQS sedan, and EQE sedan. That’s on top of its full range of plug-in hybrid vehicles, including everything from the A-Class to the mid-size GLE-Class crossover. Mercedes’ commercial vehicle lineup will also expand its all-electric offerings with models like the EQT joining the EQV. A new S-Class plug-in hybrid, the S 580e will arrive later this year and feature DC charging capability and a combined output of 516 hp and 553 lb-ft of torque.

The U.S. could be a potentially big market for the Flexible Charging System because Mercedes’ electrified vehicle lineup is about to expand here in a significant manner. In addition to the EQS sedan, the North American lineup will also get the EQB, a compact electric crossover with seating for up to seven, and the EQE sedan, which is aimed directly at the Tesla Model S. Next year, two more vehicles based on Mercedes’ battery-electric EVA platform will join the lineup, the EQS SUV and EQE SUV.

Beyond the standard versions, Mercedes will also expand its electric offerings to its Maybach and AMG divisions. The latter will introduce its first plug-in hybrid performance model at the 2021 Munich auto show, which is likely the GT 73 Four-Door Coupe. It’s expected to be an electrified 4.0-liter twin-turbo V8 with over 800 hp and 737 lb-ft. This same powertrain is also expected to find its way into the next-generation SL convertible, which is being developed under AMG. The first AMG EV is also scheduled to debut in Munich this year. A Maybach variant of the EQS SUV is due out next year while the all-electric G-Class arrives in 2024.