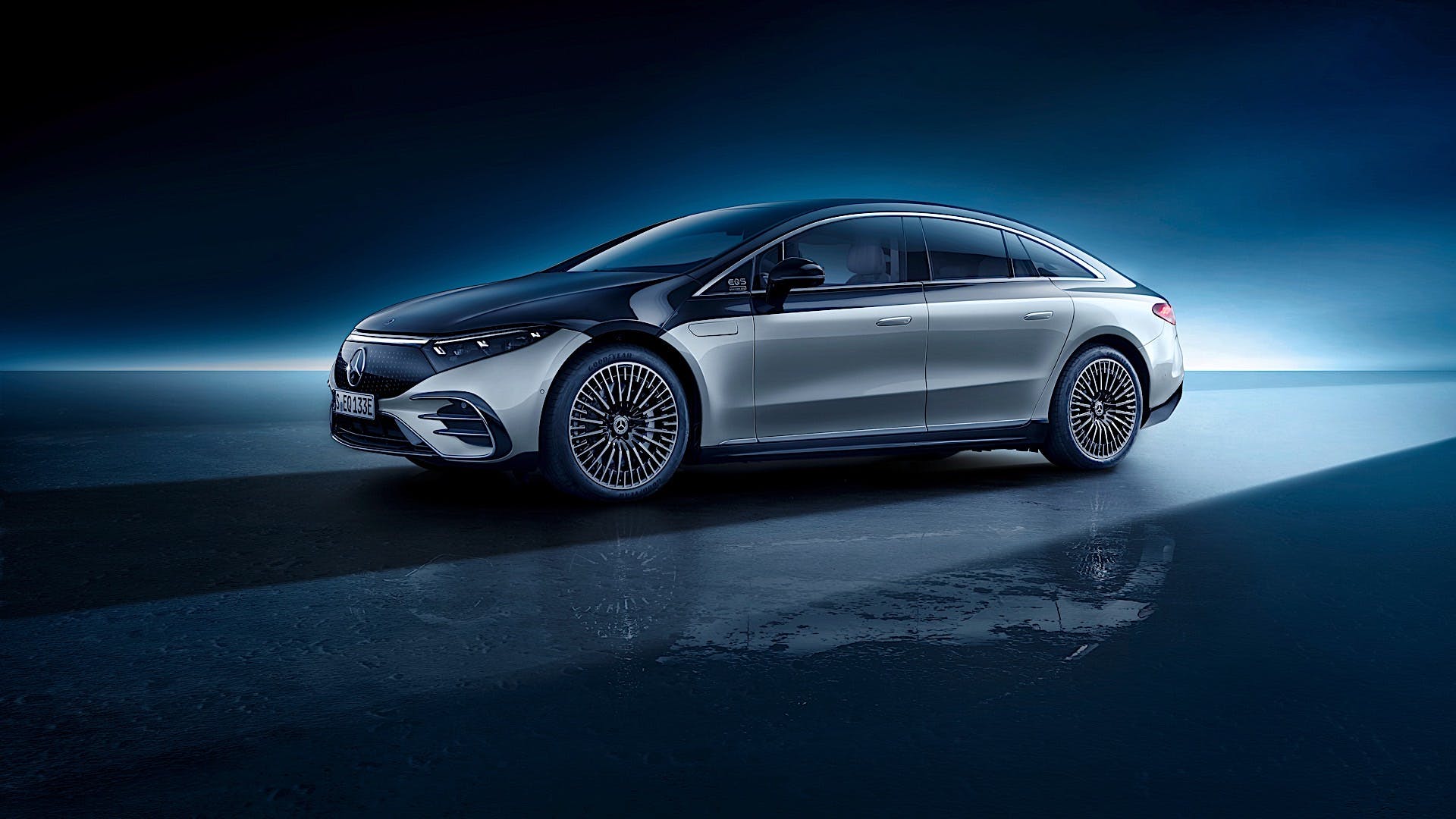 Mercedes-Benz has officially taken the wraps off the 2022 EQS, its first vehicle to ride on a dedicated platform designed specifically for battery-electric vehicles. When it arrives in the U.S. later this year, the EQS will be available in single- or dual-motor flavors. The MBUX Hyperscreen will also debut on the EQS, a massive 56-inch glass panel housing three displays.

Most of the EQS’s exterior design has remained similar to the concept it’s based on. It has a short deck lid, a cab-forward design, and a massive greenhouse. The swoopy styling contributes to the car becoming one of the most aerodynamic ever produced and creates a curvaceous side profile. In the front, you get a grille-free fascia reminiscent of other EQ vehicles like the EQC and EQA. A full-width LED taillight strip adds width to the rear and accentuates the car’s hips.

Inside, the EQS sports a minimalist interior highlighted by the massive MBUX Hyperscreen. Under that huge glass panel are three displays: a 12.3-inch digital gauge cluster, a 12.3-inch passenger screen, and a 17.7-inch OLED main touch screen. If you want a more traditional layout, there’s a smaller 12.8-inch main touch screen as standard. The new user interface will also be capable of over-the-air updates. There are lots of neat storage solutions, too, like the cubby under the center console.

You can have a relaxing moment inside the EQS with the available Energizing Comfort feature, which Mercedes says is designed to enhance the driver’s attentiveness, and reduce stress and sleepiness by creating the right cabin environment. Complementing it is the Energizing Nature feature, which plays sounds of waves, forests, and rain to calm you down and comfort your senses.

The first two EQS models coming to the U.S. will be the EQS 450+ and EQS 580 4Matic. The former is the rear-drive, single-motor model with 329 hp and 406 lb-ft of torque. If that’s not enough, the dual-motor EQS 580 is rated at 516 hp and 611 lb-ft. Both variants will use a 107.8-kWh lithium-ion battery mounted under the passenger cabin. Mercedes says a performance-oriented model with 630 hp is being planned as a follow-up to the EQS 450+ and EQS 580 4Matic. Regardless of which version you get, the EQS will be one of the most aerodynamic vehicles with a drag coefficient of 0.20.

Depending on the version, Mercedes says the EQS can travel up to 770 km or 478 miles in the WLTP cycle. Expect a lower rating in the U.S. because of the EPA’s more conservative testing cycle but it’ll still be likely that the EQS will be one of the longest range EVs when it goes on sale. Using a level 3 DC charger, the EQS can charger at a 200-kW rate and can regain 300 km or 183 miles (280 km or 174 miles in the EQS 580 4Matic) in 15 minutes on the WLTP cycle or up to 80 percent in 31 minutes. The Plug & Charge feature on the Mercedes me Charge app allows owners to simply plug in when they arrive at a supported charging station and directs them to specific ones powered by renewable energy. Using a level 2/240-volt AC charger, the EQS can charge at a 9.6- to 11.25-kW rate.

To further improve handling and maneuverability, the 2022 EQS gets rear-wheel steering as standard. This allows the rear wheels to turn up to 4.5 degrees and can be increased to 10 degrees via an over-the-air update. One-pedal driving will be featured on the EQS and have four selectable modes. An Eco Assist function allows for energy recovery based on the driving situation to allow you to drive as efficiently as possible. Dual-motor models get a new version of Mercedes’ 4Matic AWD system. This now has a torque shift function, constantly distributing power between the two axles so that the electric motors’ output is put to use efficiently. Air suspension with adaptive dampers is also standard on all EQS models.

Being a member of the S-Class family, the EQS receives extensive NVH tuning to make it as quiet as possible. Everything from the magnets inside the electric motors to the windshield and the trunk’s floor has been developed to make the EQS as quiet as possible. The electric motors even have a special foam covering to keep them from making too much noise. Even the Burmester surround sound system has noise cancellation capability to keep the noise levels down.

Mercedes has upgraded its driver assistance features in the EQS. Attention Assist now looks at the driver’s eyelid movements via a camera mounted in the gauge cluster on models with the MBUX Hyperscreen to see if you’re about to fall asleep. In addition to the rigid body structure, the EQS will also get the full helping of collision prevention technologies plus adaptive cruise control with steering assist and predictive speed regulation, traffic sign recognition, automatic lane change, and evasive steering assist.

The 2022 Mercedes-Benz EQS will go on sale in fall 2021. In the U.S., the EQS 450+, an extended range version is the standard model, and above it will be the EQS 580 4Matic. It’ll get a generous list of standard equipment, which includes 64-color interior ambient lighting, the latest generation MBUX interface, a fingerprint sensor for biometric authentication of the seven profiles stored in the vehicle, heated front seats, and 20-inch alloy wheels. Options include ventilated and massaging front seats, 21-inch alloy wheels, soft-close doors, automatic open/close doors, wireless charging, and executive rear seats.