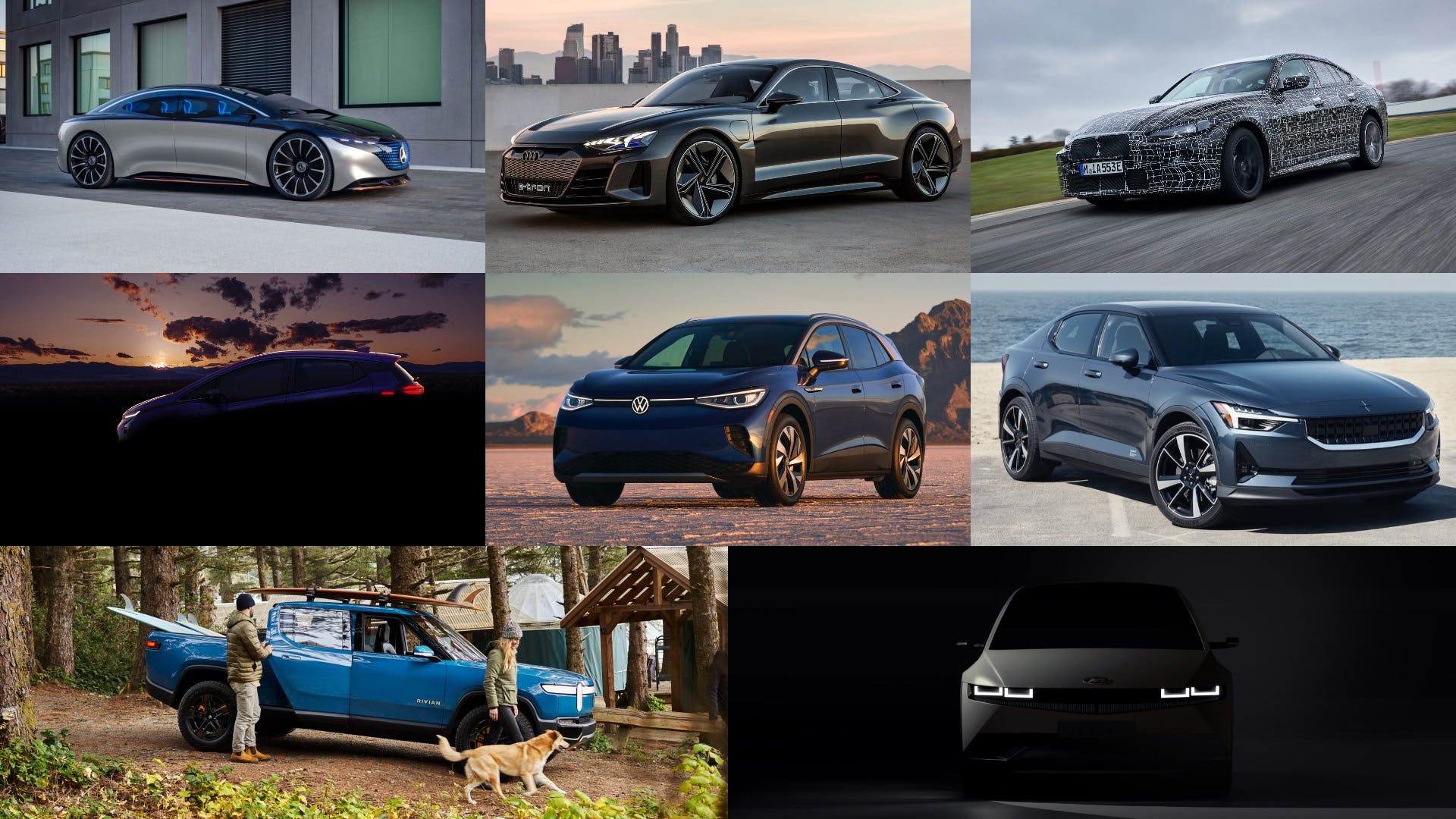 Some of the many EVs coming in 2021. Photo credit: The Manufacturer

The year 2021 will be a major one for battery-electric vehicles. Automakers will start releasing their opening salvo of dedicated EVs, signaling the continued move toward electrification across both mainstream and luxury segments. Most of these vehicles are rated for over 200 miles of range or are expected to go longer than that on a single charge. Here are 18 EVs that are coming up for 2021 or already on sale now in the U.S.

Regardless of whether it has a yoke or not, the refreshed Tesla Model S will have one of the longest ranges per charge of any EV. The Plaid+ model, which features a three-motor layout, promises over 500 miles on a full charge while offering supercar levels of acceleration.

The Hyundai Ioniq 5 will be the first vehicle under the Ioniq sub brand. Riding on the E-GMP platform, which is built specifically for EVs, the Ioniq 5 will be offered in single or dual-motor layouts, the former of which should offer the most range per charge. In typical Hyundai fashion, the Ioniq 5’s exterior design hasn’t deviated from the 45 Concept on which it’s based on.

Think of the Chevrolet Bolt EUV as the subcompact crossover iteration of the original Bolt EV hatchback. That doesn’t mean you’ll be sacrificing range for additional practicality, though. This little utility vehicle could be packing GM’s Ultium battery tech, which should give it exceptional driving range even if it’s available in a dual-motor AWD version.

Kia hasn’t revealed the name of its first dedicated EV but we know it’ll be a swoopy crossover with a coupe-like roofline. This will be among the first group of EVs on the E-GMP platform and it’ll take plenty of design inspiration from the Futuron and Imagine concepts. The CV will also be sportier and more performance-oriented to keep it distinctive.

Expected to go into production in August, the Genesis GV60 will be the brand’s smallest crossover and its first dedicated EV. The GV60 should be the most luxurious of the three vehicles debuting on the Hyundai Motor Group’s E-GMP platform. Much of the GV60’s exterior takes cues from the Mint Concept, meaning it’ll be another swoopy fastback crossover.

One of the most important vehicles for Nissan, the Ariya signals the Japanese automaker’s move toward an electric future. Available in single or dual-motor configurations, the Ariya promises around 300 miles per charge and slots in the heart of the compact crossover segment.

Think of the BMW i4 as the all-electric version of the upcoming 4 Series Gran Coupe when it arrives in production form later this year. Previewed by the Concept i4 and i Vision Dynamics, the i4 is aimed squarely at the Tesla Model 3 and aims to deliver over 300 miles of range per charge and exciting driving dynamics.

Developed alongside the Porsche Taycan, the Audi e-tron GT will be on the sporty end of the EV spectrum. Base versions are expected to travel up to 250 miles on a single charge. High-performance S and RS variants will likely join as the most potent EVs in Audi’s lineup.

The Volkswagen ID.4 compact crossover spearheads the German brand’s move toward electrification in the U.S. Initially available in single-motor configuration, a dual-motor version is expected to arrive later this year. Following that is a performance-oriented variant called the ID.4 GTX.

Mercedes-Benz dubs the EQS as the S-class of EVs and rightfully so. When it debuts later this year, the EQS will be a technological showcase, featuring the first application of the MBUX Hyperscreen interface. The EQS is also the first vehicle on Mercedes’ dedicated EV platform, which will underpin more EQ-badged vehicles soon.

The GMC Hummer EV is the first vehicle to use General Motors’ Ultium battery technology and it’ll be one of the most capable trucks in the dirt. Numerous off-road driving modes and four-wheel steering should give the Hummer EV the tools to conquer every type of surface. Additionally, GMC claims it can hit 60 mph in 3.5 seconds and travel over 350 miles per charge when equipped with the three-motor setup and the largest battery option.

Like the Model S, the Tesla Model X receives a fresh new interior layout and a significant powertrain upgrade. This crossover promises at least 340 miles of range on a charge and improved performance, which should make it one of the quickest vehicles in a straight line.

If you’re looking for an all-electric truck with exceptional versatility and off-road chops for your adventures in the woods, you should check out the Rivian R1T. Expected to go on sale in the latter half of 2021, the R1T can tow 11,000 pounds, has four electric motors, and is expected to be able to go over 300 miles on a charge.

The Polestar 2 is the first all-electric vehicle from Volvo’s performance-oriented brand. Packing 408 hp and 487 lb-ft of torque from its dual-motor setup, AWD, and an optional Performance package, this sports sedan proves EVs can be potent performers. The best part? It’s a liftback, meaning you also get the practicality of a hatchback.

Yes, Ford put the Mustang name on a crossover but it appears to have not been as bad as it seems considering the Mach-E drives well. The range is pretty generous, too, with certain versions offering around 300 miles per charge. If you’re looking for a hotter version, a dual-motor GT model is coming in Summer 2021 and is expected to sprint to 60 mph in 3.5 seconds.

Just because Kia has a dedicated EV coming doesn’t mean it’s not giving the Niro any attention. The second-generation Niro (code-named SG2) will get a significant overhaul thanks to a heavily updated platform and new powertrains. Expect the Niro EV to retain its FWD layout but see a range increase from the current car’s 239 miles per charge to closer to 300 miles.

Volvo’s first all-electric model in the U.S. is the XC40 Recharge, which is on sale now. This takes all the goodness of the gas-powered XC40 and gives it a potent electric powertrain. The result is a luxurious, tech-packed crossover that’s comfortable and pleasant to drive daily.

One of the original EVs to offer over 200 miles of range per charge, the Chevrolet Bolt EV has seen continuous improvements since its debut as a 2017 model. The refreshed Bolt EV is about to arrive as a 2022 model and we expect it to get another major powertrain improvement as GM electrifies its entire portfolio.