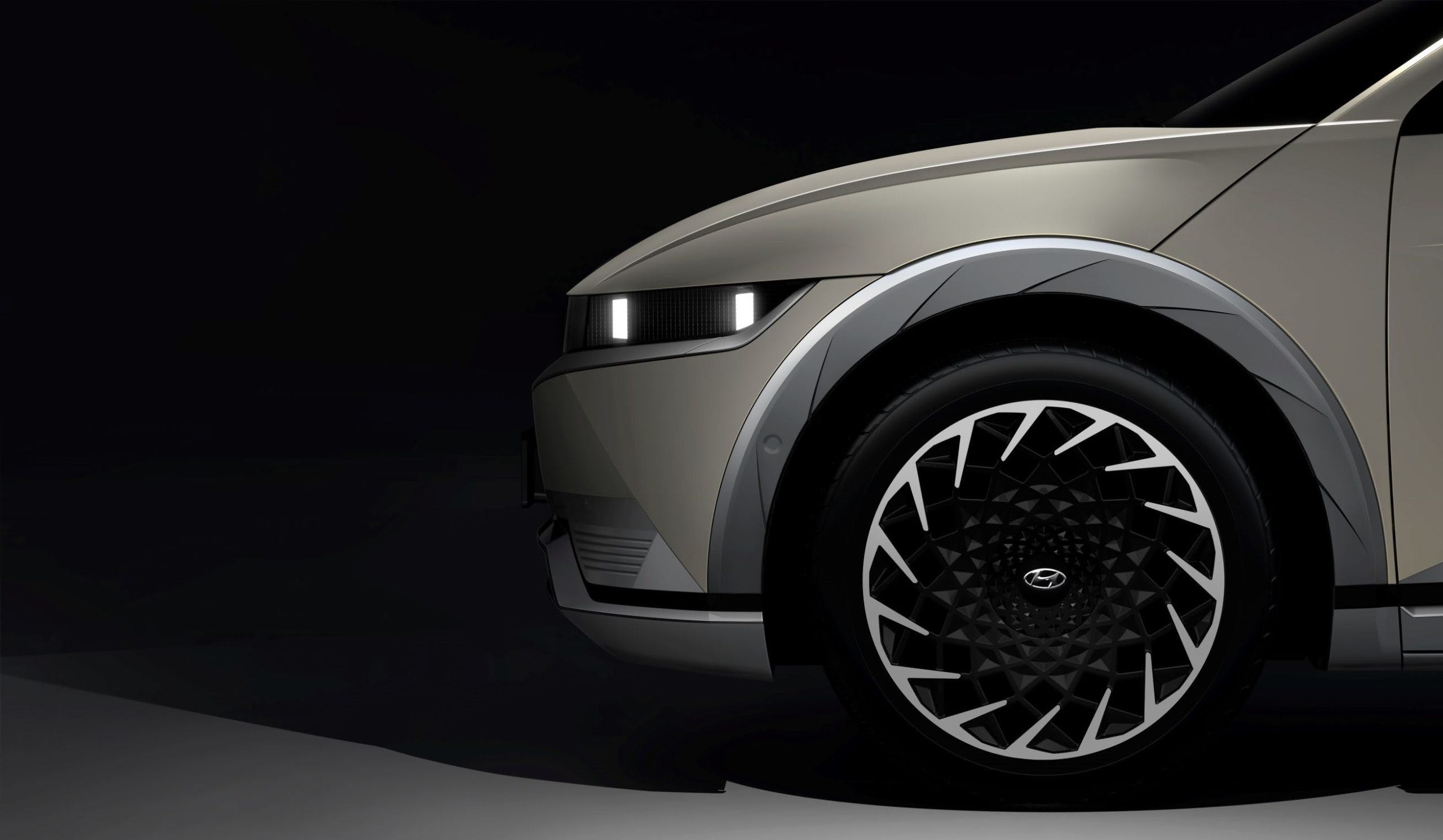 The Hyundai Ioniq 5’s debut is imminent. Scheduled to greet the world in a virtual event next month, the Ioniq 5 marks the beginning of Hyundai Motor Group’s battery electric offensive, which will culminate in the addition of 23 new EVs across its three brands. Hyundai will lead the charge with the Ioniq 5, a compact EV crossover aimed at the likes of the Tesla Model Y, Nissan Ariya, and the upcoming Chevrolet Bolt EUV. Thanks to several leaks, teasers, and information from our insiders we know a lot about this EV. Here’s a rundown on what to expect from the Ioniq 5.

Quite possibly the worst kept secret of the Hyundai Ioniq 5 is its exterior design. Based closely on the 45 Concept first shown at the 2019 Frankfurt auto show, the Ioniq 5 will be an angular, retro-futuristic crossover that hearkens back to the Giorgetto Giugiaro-designed Pony from 1975. Most of the 45 Concept’s angles will carry over to the Ioniq 5 unchanged, giving the crossover its distinctive looks. Pixel-like headlights and taillights will add to the Ioniq 5’s unique appearance, allowing it to stand out even more. Certain global versions should feature side cameras instead of conventional side mirrors. Solar panel roofs will likely be available on higher trims. That should help improve the Ioniq 5’s overall efficiency by running auxiliary systems and things like the multimedia system and climate controls.

Hyundai has been on a roll when it comes to interior design, blending minimalism with user-friendliness and cutting-edge technologies. Thanks to the E-GMP platform’s long wheelbase, expect the Ioniq 5 to seat five passengers comfortably. A flat floor should help improve the cabin’s usability. Hyundai could also add an adjustable center console for added flexibility. The car’s angular rear window could impact overall vertical space behind the rear seats but we doubt it’ll be much considering how hard Hyundai worked to make sure the Ioniq 5 is packaged to maximize practicality.

Technology will be at the forefront in the Hyundai Ioniq 5. The same dual-display layout will be featured; however, there’s no word on whether Hyundai plans to use two 10.25- or 12.3-inch screens. Expect the whole multimedia system to be user-friendly though because that remains a hallmark of Hyundai’s interface. The layout could be similar to the ones found in the Sonata and Elantra where both screens are housed under one glass panel. A head-up display could augment the dual-display layout on more expensive variants and should provide additional important information like charge levels, range, and ways to maximize overall efficiency.

Hyundai’s latest range of semi-autonomous driving technologies should be offered on the Ioniq 5. Everything from collision prevention to features that help make commuting easy like Highway Driving Assist and lane centering should all be available. The Ioniq 5 should debut more advanced versions, which should provide more autonomy, especially on well-marked roads. Expect all variants to offer some degree of semi-autonomy; however, if you’re looking for the whole suite, you may need to pay up for a more expensive version of the Ioniq 5.

The Hyundai Ioniq 5 will be the first vehicle on the E-GMP platform, which features a new power plant and an RWD-based layout. Thanks to a recent leak from Hyundai’s Austrian arm, we know that one of the versions of the Ioniq 5 will get up to 308 hp and be able to travel around 300 miles on the WLTP cycle when equipped with the smaller 58-kWh lithium-ion battery. The second battery option, which is rumored to be a 73- or 75-kWh unit should increase the range to around 341 miles on a charge based on the WLTP cycle. Expect a slightly lower range on the EPA cycle. Should Hyundai sell the smaller battery option in the U.S., it’ll likely have a similar range to the Kona Electric. The larger 73- or 75-kWh unit should be able to break past the 300-mile mark on the EPA cycle. However, the available 20-inch alloy wheels could put that in the low-300 mark instead of the mid-300 range as in the WLTP cycle.

Thanks to the battery and electric motor mounted as low as possible, the Ioniq 5 should drive more like a car than a crossover. Single-motor variants should offer RWD dynamics thanks to the rear-mounted electric motor. To cut costs and keep the starting price as low as possible, single-motor variants will likely be available only with the smaller battery. Dual-motor versions will likely be the high-performance model and be offered with the larger of two battery sizes to maximize range without sacrificing capability. The Ioniq 5 should be able to accelerate to 100 km/h or 62 mph in 5.2 seconds in its dual-motor AWD form.

Hyundai’s patented charging capability allows the Ioniq 5 to accommodate 400- and 800 volts. That allows the battery to get replenished to 80 percent in 18 minutes or gain 62 miles for every five minutes of charging. The car will also be able to work with current and upcoming charging standards, future-proofing the Ioniq 5 as EV infrastructure evolves. The two-way charging capability will also allow the car to run appliances, allowing you to use it as an auxiliary power source via the standard 110- or 220-volt outlet.

The Hyundai Ioniq 5 is a major step forward because it will finally give the company a dedicated EV with the potential to challenge established rivals. Between the modular platform built to maximize electric vehicle performance and packaging, Hyundai’s user-friendly technologies, and concept carlike design that’s attractive yet distinct, this EV has plenty of promise. One question remains, though. Will the Ioniq 5 be able to offer the right blend of range and performance? We hope so.