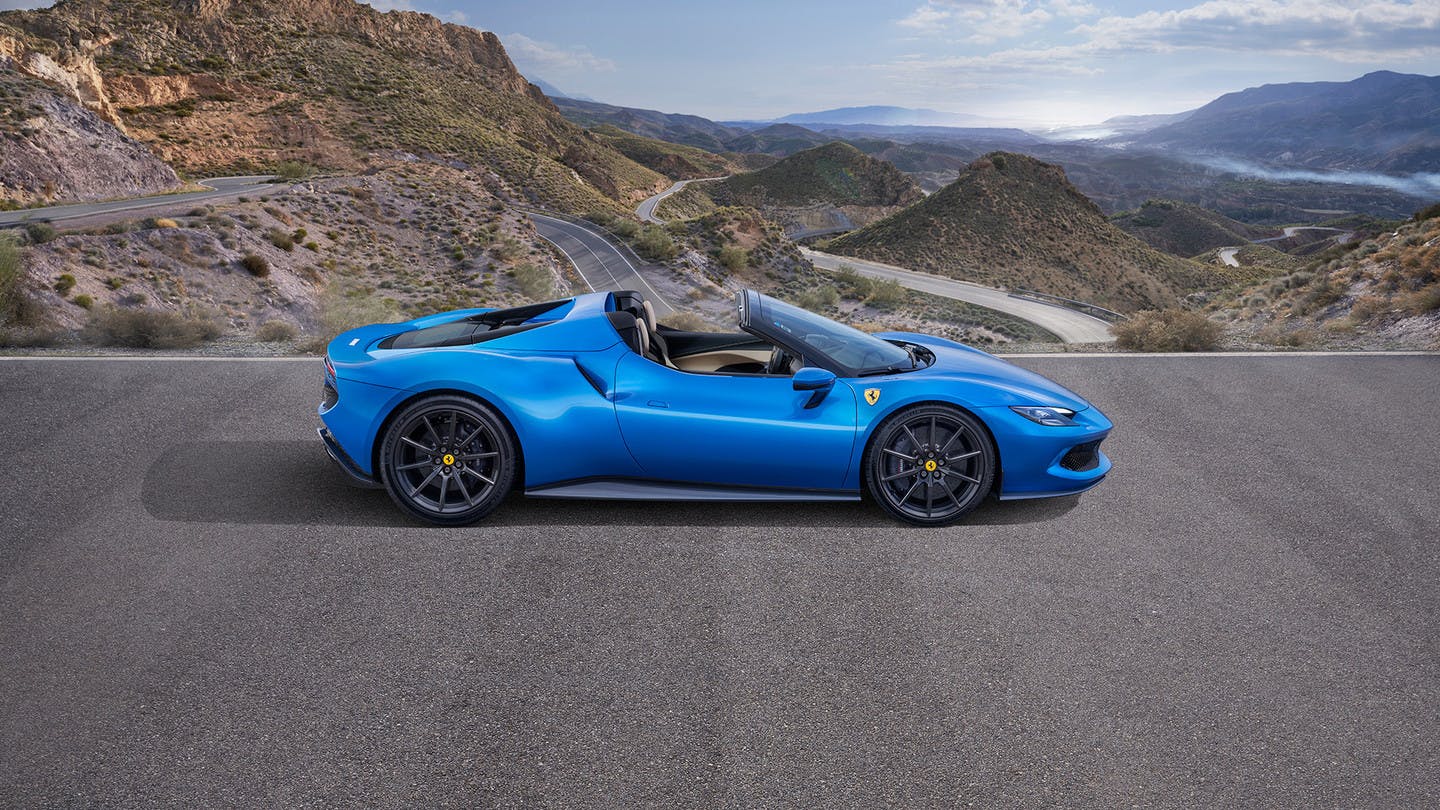 When the Ferrari 296 GTB first arrived as a coupe, it was only a matter of time before the convertible variant followed. Now, we finally have that. Called the Ferrari 296 GTS, this two-seat droptop complements its fixed-roof sibling by giving you endless headroom when the weather is perfect. This is the second application of Ferrari’s new plug-in hybrid system. It couples a turbocharged 3.0-liter V6 with an electric motor, a 7.45-kWh battery, and a dual-clutch automatic transmission. Combined, the powertrain makes a whopping 830 hp going exclusively through the rear wheels. According to Ferrari, the 296 GTS can travel up to 25 km or 15 miles in all-electric mode but that’s likely on the more optimistic WLTP cycle.

Ferrari has made extensive tweaks to ensure maximum performance on the 296 GTS. Features like the electronic differential help put the power down as efficiently as possible. A TMA (transition manager actuator) allows the car to switch between its operating cycles providing improved power delivery. It can also decouple the electric motor from the gas engine, enabling the car to run on one or the other exclusively. Active aerodynamics also improve the car’s capabilities and include a retractable spoiler integrated into the rear bumper. Even the brakes are based on the Aero calipers from the SF90 Stradale and feature ventilation ducts in their casting.

Improved cooling methods have been used for better heat management. The engine, for example, now has a hot vee setup where the turbos are located in the valley between the cylinder banks so that the engine bay and electrical components don’t get too hot. Two radiators add additional cooling for the engine and transmission while two condensers keep the battery cool. Hot air is then pushed out along the underbody to keep it from interfering with the cool air going to the intercoolers.

For the convertible variant, Ferrari redesigned the 296 GTB’s chassis with a focus on improving torsional rigidity and bending stiffness. The former is up by 50% while the latter is up by 8%. Extensive use of lightweight materials keeps weight down to preserve the car’s ride and handling balance. Four drive modes can be selected including an all-electric mode and Qualify, which provides maximum performance but at the cost of lower battery charging.

Like the 296 GTB, the 296 GTS features a clean exterior with a focus on minimizing modifications on the bodywork. The retractable hardtop resulted in the creation of a unique rear end from the 296 GTB because designers needed to find a way to stow the roof in the engine bay. Dropping and raising the roof takes 14 seconds and can be done at speeds of up to 45 km/h or 28 mph. You still get the flying buttresses to show the relationship between the coupe and convertible models.

Inside, the 296 GTS’ cabin features a driver-focused layout just like the 296 GTB. The main display is the digital gauge cluster in front of the driver. There’s also a smaller screen on the passenger side that appears to give you access to media and climate controls. Ferrari also added aerodynamic flaps on the rear trim door structure to minimize wind buffeting when driving with the roof down.

For those looking to maximize the Ferrari 296 GTS’ performance, you can opt for the Assetto Fiorano package. It adds additional aero treatments and cuts the vehicle’s overall weight. Some of the highlights are the adjustable Multimatic shocks optimized for track use and high-downforce carbon fiber components that provide an additional 10 kg or 22 lbs of downforce. This option also gets you additional lightweight materials like carbon fiber inside and outside of the vehicle.

The Assetto Fiorano package’s changes are more substantial, going beyond adding more go-fast goodies and lighter materials. It includes a redesigned basic structure with different door panels that reduce the 296 GTS’ overall weight by 8 kg or 17 lbs. Owners who choose this option can get a special livery inspired by the 250 Le Mans and Michelin Pilot Sport Cup2R high-performance tires.

Expect the Ferrari 296 GTS to go on sale later this year as the third electrified vehicle wearing the Prancing Horse badge after the SF90 Stradale and 296 GTB. Expect the plug-in hybrid powertrain in this droptop to find its way into Ferrari’s first SUV, the Purosangue.