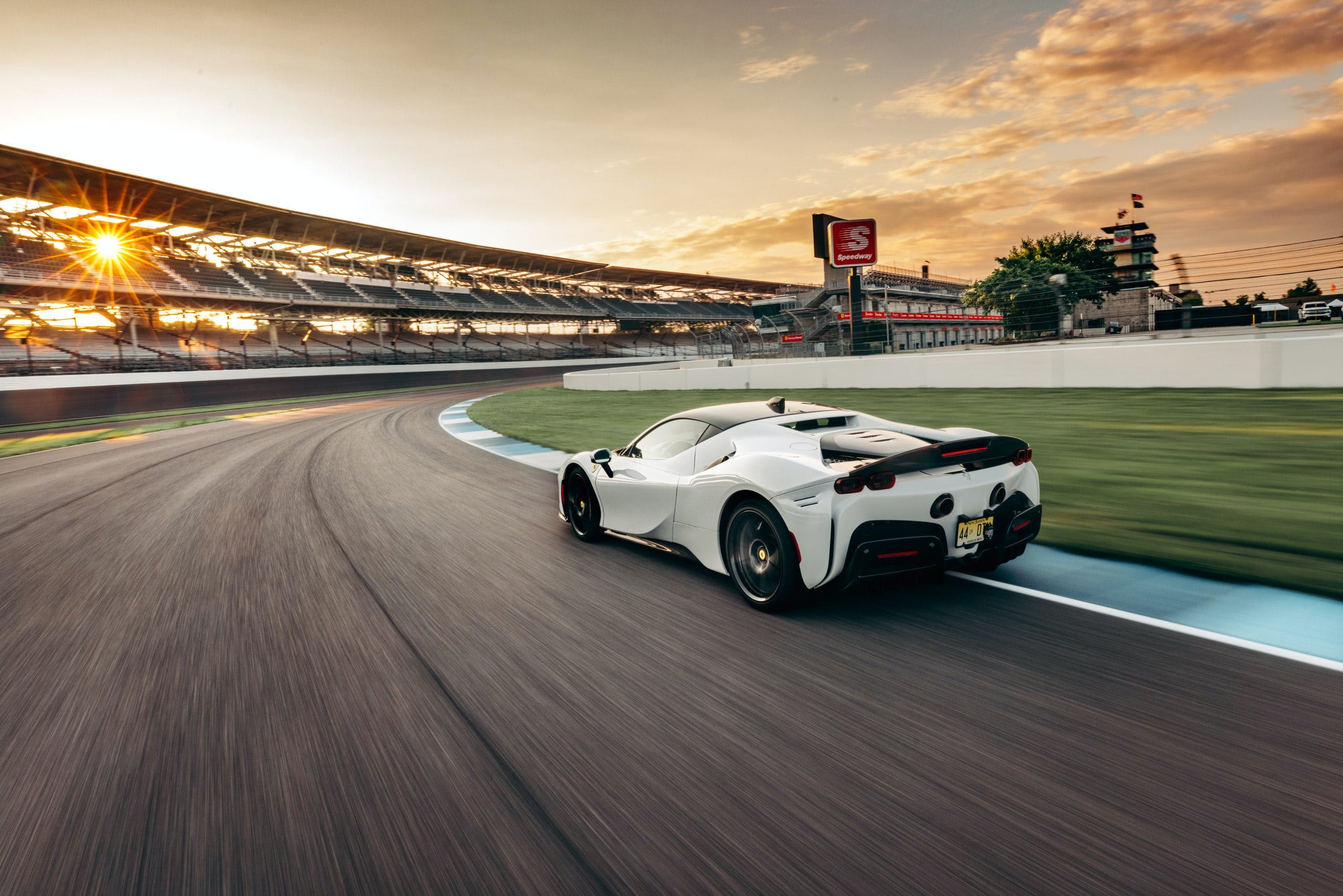 The Ferrari SF90 Stradale has set the production lap record at Indianapolis Motor Speedway (IMS). At 1:29.625, the electrified prancing horse is the quickest production vehicle around that track, which is 2.439 miles long. The SF90 also reached speeds of up to 174.6 mph when it set the record-breaking lap time.

According to Ferrari, the SF90 can hit 100 km/h (62 mph) in just 2.5 seconds on the way to a top speed of 211 mph. The Ferrari SF90 is also the fastest vehicle on the Fiorano Circuit where it beat the LaFerrari by seven-tenths of a second in 2020. During the record-breaking run at IMS, Ferrari North America president Matteo Torre was there that weekend for the Ferrari Racing Days event with the Ferrari Challenge, XX, and F1 Clienti programs.

“The Indianapolis Motor Speedway was built in 1909 to be a proving ground for automobiles of all makes, and we have remained true to that DNA since,” said J. Douglas Boles, president of IMS. “Whether it is competing in purpose-built race cars or setting new standards in production cars, the historic 2.5-mile oval and the challenging road course at IMS continue to be automotive development and performance catalysts like none other. Across 112 years of history, we’ve always been excited to be part of these important milestones.”

Currently, the most powerful Ferrari made, the SF90 is also the first plug-in hybrid model from the Italian brand. The 4.0-liter twin-turbo V8 is an evolution of the unit found in the 488 Pista and F8 Tributo featuring a higher displacement, modified engine intake, and exhaust, and it has new central fuel injectors. Its turbocharger assembly is mounted lower than the exhaust system while the engine as a whole sits 2.0 inches lower to keep the center of gravity down. Two electric motors are mounted in front, one at each wheel, enabling torque vectoring. A 7.9-kWh battery allows the SF90 to travel up to 16 miles in EV mode but that’s likely on the less conservative WLTP cycle. The SF90’s combined output is 986 hp and 590 lb-ft of torque.

The SF90 is also the first Ferrari to use the new eight-speed dual-clutch automatic transmission. Unlike other gearboxes, this unit doesn’t have a reverse gear, meaning the SF90 uses its two electric motors to move backward. Versus the old seven-speed unit, the new eight-speed is 22 pounds lighter and shifts 30 percent quicker according to Ferrari. Electronic Slide Slip Control (eSSC) controls torque distribution to all four wheels and is combined with electric Traction Control (eTC), a new brake-by-wire system that blends traditional hydraulic braking with the electric motor to provide maximum regeneration.

Thanks to extensive carbon fiber and aluminum use for improved structural rigidity, the SF90 weighs as little as 3,461 pounds. Its electrified components make up 595 pounds of the car’s total weight. The particular vehicle used for the record-setting lap time at IMS was an SF90 Stradale Assetto Fiorano, which has GT-derived Multimatic shocks, carbon-fiber underbody, and door panels, titanium springs, and exhaust, and a rear spoiler that generate up to 390 kg or 860 pounds of downforce at 155 mph. You can also order the Ferrari SF90 Stradale Assetto Fiorano with Michelin Pilot Sport Cup 2 performance tires, which were equipped on the vehicle that set the production car lap record at IMS.