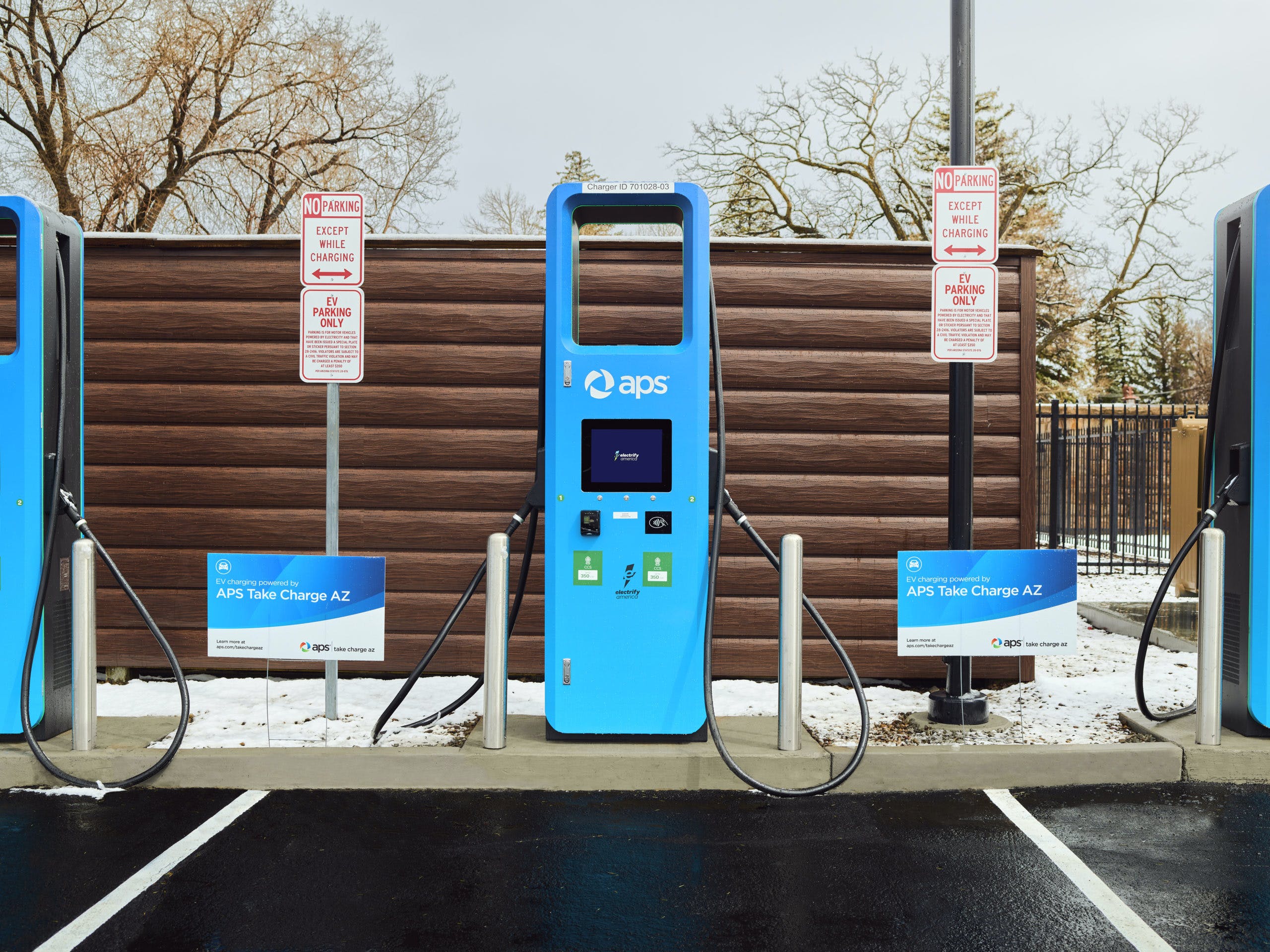 Electrify Commercial, a division of Electrify America, has opened the first of five charging stations that are part of the Arizona Public Service’s “Take Charge AZ” program. Located in Show Low, Arizona, these charging stations are in the parking lot of City Hall on 9th street. In total, there are four terminals two of which can deliver 350 kW of power, enabling certain battery-electric vehicles to charge in around 20 minutes.

Drivers visiting the city of Show Low can charge at the stations and pay via card or the Electrify America app. The latter also has a feature that lets you locate Electrify America stations, initiate a charge, and check your vehicle’s status while the charging session is underway.

While we create pathways to serve our customers with 100% carbon-free electricity by 2050, we’re taking steps to help decarbonize the transportation sector and contribute to a cleaner air and energy future for Arizona,” said Daniel Haughton, Director of Customer Technology at Arizona Public Service. “These ultra-fast vehicle chargers, installed along popular travel corridors in our state, will build range confidence in EV drivers and move us closer to our goal of supporting the adoption of 450,000 EVs in APS service territory by 2030.”

Electrify Commercial aims to help businesses, governments, and utilities develop turnkey charging solutions for battery-electric vehicles. The division aims to help its clients create programs tailored specifically to their needs and is backed by one of the largest charging networks in the U.S. Arizona Public Service is the latest client for Electrify Commercial and their collaboration aims to expand the availability of DC charging to more cities in the state. Throughout 2022, Electrify Commercial and the Arizona Public Service are expected to open four additional stations in Globe, Payton, Prescott, and Sedona.

The Electrify America network has been growing significantly as it continues to add more charging stations across the nation. Last year, it added a new location near Yosemite National Park to make it easier for BEV owners to do road trips there without worrying about where to charge their vehicles. Electrify America is also pushing for 100 percent carbon-neutral electricity and has added solar panels to some of its charging stations including two of its largest ones located in Baker and Santa Clara, both of which are in California.

By 2026, Electrify America intends to have 1,800 charging stations across the United States and Canada featuring over 10,000 individual chargers. The company aims to expand its presence to 49 states plus Washington D.C. as it expands its network and supports the adoption of BEVs across North America. Electrify Commercial will help this goal as it assists businesses, utility companies, and governments in building the necessary infrastructure. Expect this division of Electrify America to collaborate with more companies and local governments across the nation.