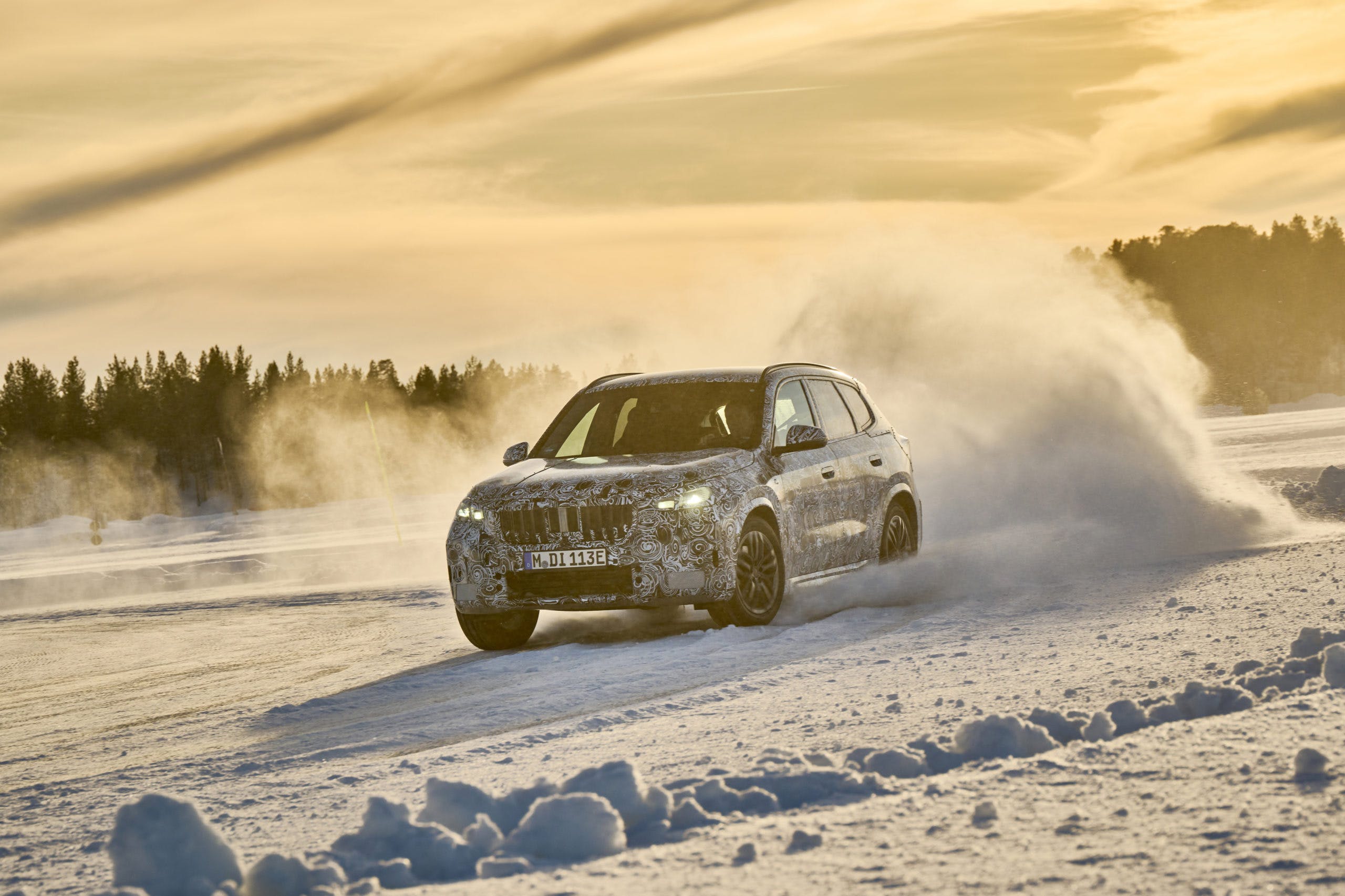 The final touches are being implemented to the next all-electric vehicle in the BMW lineup, the iX1. Slotting below the iX3, the brand’s entry-level crossover has just finished undergoing winter testing in Arjeplog, Sweden near the Arctic Circle. There, the vehicle was driven through snow-covered roads and specially prepared iced tracks alongside the plug-in hybrid variant of the third-generation X1. The BMW iX1 will be the fifth battery-electric vehicle in the lineup following the i4, iX, iX3, and i7.

Engineers put prototypes through extremely low temperatures and wintery road conditions to push the electric motors, AWD system, battery, power electronics, and charging system to their limits. The BMW iX1 is the latest to get the brand’s fifth-generation eDrive system featuring a battery pack with the latest cell technology, intelligently controlled heat management, and short charging times even in sub-zero temperatures. Both electric motors’ power delivery is precisely coordinated for optimum traction and performance.

At BMW Group’s test center in Arjeplog, engineers can fine-tune the powertrain and chassis of new models on specially-prepared surfaces. This gives the research and development team the ideal conditions that will enable them to hone how well the motors, AWD system, suspension, and longitudinal and lateral dynamics of the vehicle. Ice surfaces allow the team to reproduce conditions that will allow them to optimize the way the powertrain and chassis work together. This results in secure driving characteristics with the sportier calibration expected of a vehicle wearing the BMW badge.

Making its global debut in fall 2022, the iX1 will immediately follow the standard X1. The crossover will use the new FAAR architecture first utilized in the second-generation 2 Series Active Tourer. Its powertrain options will likely mirror that of its tall hatchback sibling including the plug-in hybrids. These will use a 1.5-liter turbocharged three-cylinder coupled to an electric motor, a 16.3-kWh battery (14.9 kWh usable), and a seven-speed dual-clutch automatic transmission. The standard version of this system makes 245 hp combined while the high-output one makes a generous 326 hp thanks to a more powerful engine and electric motor.

The all-electric iX1 will be offered in single- and dual-motor variants with the latter getting at least 270 hp. It will compete with the likes of the Audi Q4 e-tron, Mercedes-Benz EQB, and Volvo XC40 Recharge. The addition of an all-electric variant to the third-generation X1 family confirms that BMW Group’s FAAR platform can accommodate BEVs. This likely isn’t the only model to get a fully electric version since the iX2 is likely in the cards as well.

Within BMW Group, Mini will likely benefit the most from the FAAR architecture’s flexibility. The third-generation Countryman will be underpinned by it too and it’ll likely use the same plug-in hybrid system and all-electric powertrain. Mini’s dedicated BEV, a crossover slotting below the Countryman likely wearing the Paceman nameplate, will most likely be on this architecture as well. Mini’s next-generation Cooper SE Hardtop and the Convertible may also use the FAAR platform. The former could be distinguished from the smaller model being co-developed with Great Wall Motors that will be closely related to the Ora Cat. That version will likely be built in China for the European and Chinese markets. The FAAR-based variants could be built specifically for North America and use larger batteries to give them more range and power.

Expect the BMW iX1 to go on sale in Europe first where it will likely sell in high volumes. The crossover could eventually come to North America but the chances are pretty slim despite its three key competitors all being here.

Written by Stefan Ogbac
Follow Author
RELATED ARTICLES
2022 Mini Cooper S E gets a small range bump
2022 BMW iX xDrive50 electric crossover has up to 516 hp and starts under $85,000 in the U.S.
2022 BMW iX and i4 to make North American debut on June 1
The best ratchet tie down straps
RELATED ARTICLES
JOIN THE EV PULSE NEWSLETTER
Receive weekly updates on each of our electrifying articles.