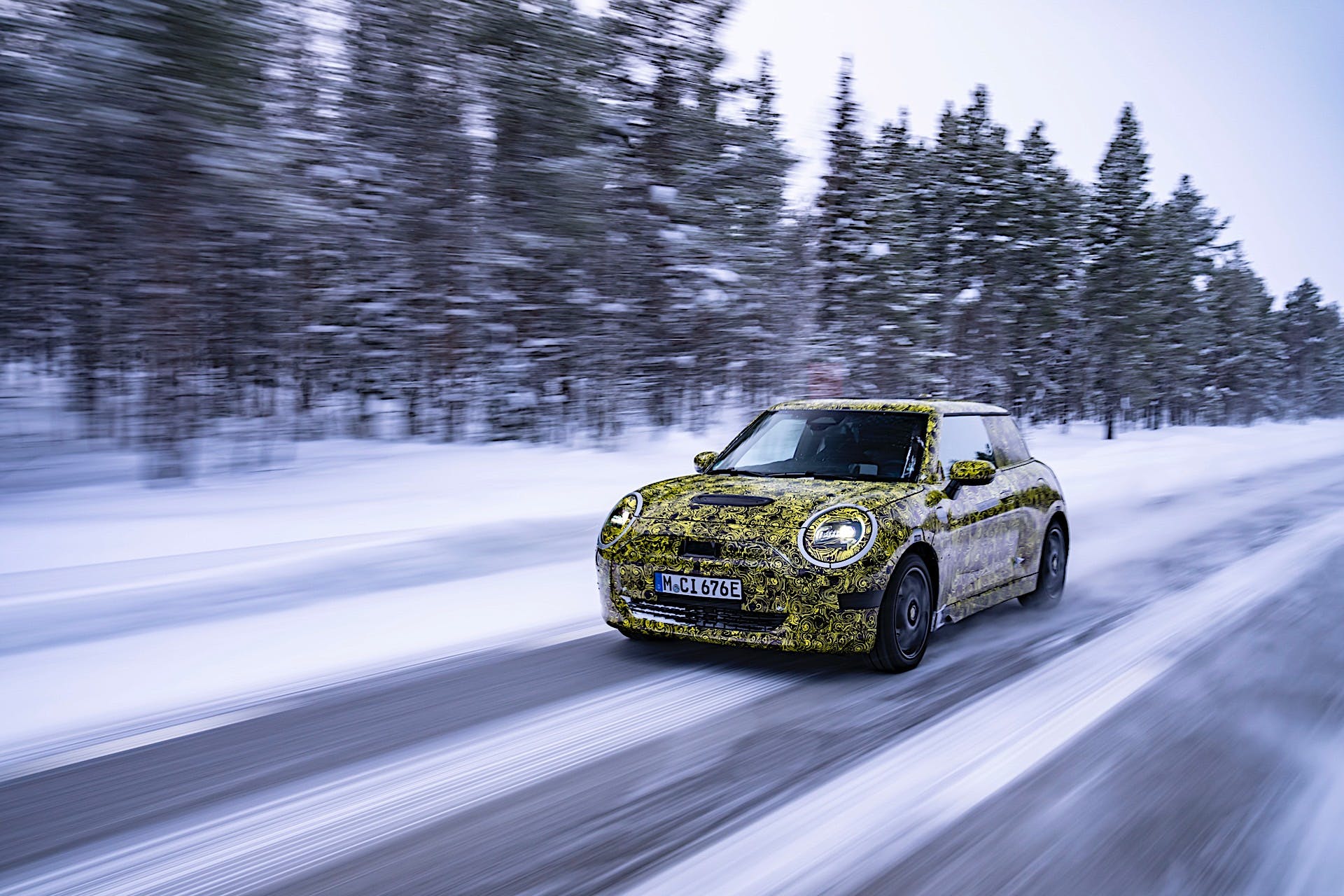 The next-generation, all-electric Mini Hardtop has been teased undergoing cold-weather testing near the Arctic Circle in Sweden. It will be the first model out of the gate, initiating Mini’s upcoming four-car product offensive. In the bitter cold, the vehicle’s battery-electric powertrain gets put through the test to see how they fare in extreme conditions. Mini says its components have shown a high degree of maturity even in temperatures below freezing.

The all-electric Mini Hardtop prototypes are also driven on snow-covered roads and specially prepared surfaces on top of frozen lakes to test their driving characteristics, steering, and chassis. This allows development engineers to harmonize every component of the vehicle and ensure that it’s cohesive. At the BMW Group’s winter test center in Arjeplog, Sweden, engineers test the power delivery of the electric motor, traction, damping and suspension characteristics, cornering behavior, braking, and steering. All of these factors are considered during testing to ensure that the new model retains the trademark Mini driving experience.

The fourth-generation Hardtop has been developed from the start with electrification in mind. Mini aims to offer its trademark fun-to-drive characteristics with a battery-electric powertrain while ensuring that the little hatchback keeps its small footprint and well-packaged interior. “MINI is on a path of growth and heading toward a fully electric future,” said Stefanie Wurst, Head of the Mini Brand. “Our iconic MINI three-door maximizes the experience for our customers through its electrified go-cart feeling combined with digitalized touchpoints — and a clear focus on sustainability with a minimal environmental footprint.”

Electrification gives designers more freedom when it comes to styling the new two-door Hardtop. You’ll still recognize it as a Mini but it will have new details to set it apart from its predecessor. Don’t expect too many changes, though. Mini sticks to an evolutionary styling approach. The all-electric Hardtop recently leaked undisguised on Instagram, giving us a glimpse at the next-generation hatchback’s new yet familiar look.

In a 20-second video that Mini included as part of its teaser, the new Hardtop appears to be slightly larger than the car it replaces. The new Hardtop also appears to be taller than its predecessor, which has a lower roofline and is currently the longest modern Mini. It also appears to be wider than before, which likely hints at a larger battery pack. Telltale signs that this camouflaged prototype is a battery-electric vehicle include the lack of exhausts and an enclosed grille. There’s also a sticker on the driver’s side door stating that this prototype is a BEV next to a newly designed door handle that appears flush with the body.

The next-generation, all-electric Mini Hardtop is the first vehicle in the brand’s next-generation lineup. Like the previous generation, the two-door will likely be the only one available as a BEV. Following the Hardtop is the third-generation Countryman crossover, which will be available with a broad range of powertrains including a plug-in hybrid and a fully electric option. It will be previewed this year by a new concept car. A second crossover follows the Countryman and will be Mini’s first dedicated BEV. It will reportedly revive the Paceman nameplate as a four-door coupe-like crossover slotting below the larger Countryman. The final vehicle will be the Mini Convertible, which is scheduled to debut in 2025 and be the brand’s second model that will be exclusively a BEV.