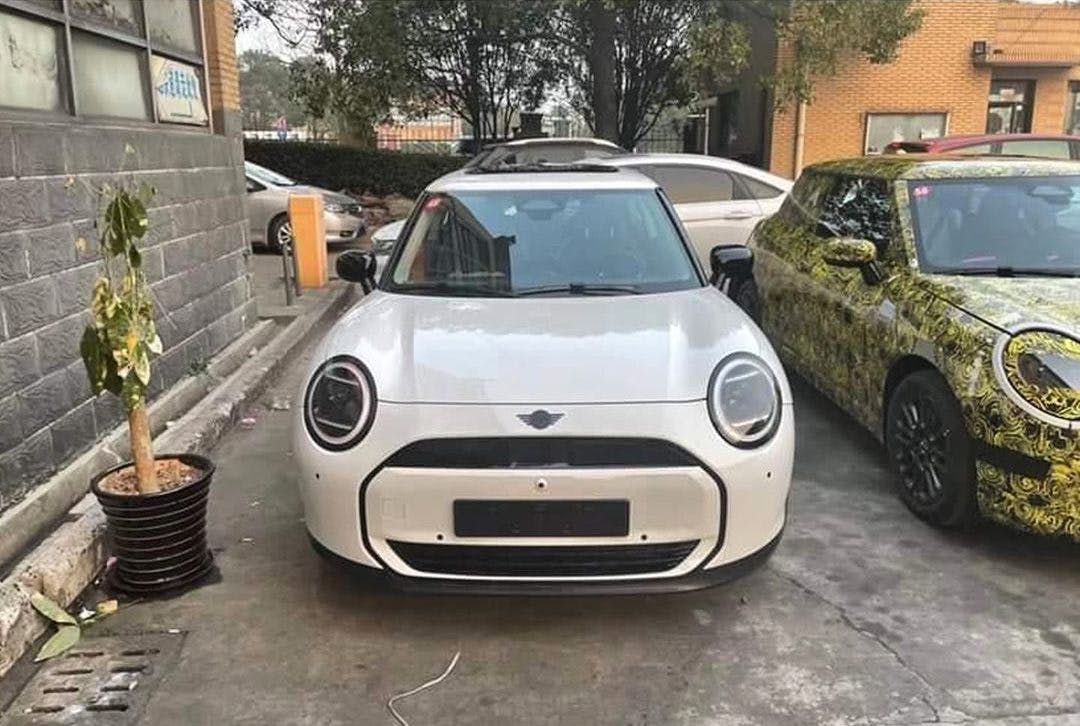 A new Mini Hardtop is due out in the next two years and we get to see a glimpse of it thanks to a leak on the Instagram account wilcoblok. Photos of the next-generation Mini Cooper SE, the battery-electric version have leaked out on social media. The little electric hatchback is completely uncovered and was caught next to three other prototypes wearing Mini’s usual swirly camouflage.

This particular example is a two-door Hardtop and we get to see many new cues together with the familiar shape. Some of the key differences in the new Mini Cooper SE include the door handles, which are now flush with the body and appear to be pop-up ones similar to what you find in the recent crop of battery-electric vehicles like the Hyundai Ioniq 5. The biggest change will be the rear because the rounded taillights have been replaced by trapezoidal ones connected by a black trim piece. Mini also added a flat black logo and the model designation is now emblazoned on the trim connecting the taillights. A green S badge denotes that this is the all-electric version.

As before, the front end remains evolutionary and recognizable as a Mini. The grille, however, is closed off by body-colored plastic; this is likely to help improve its aerodynamics. You still get the round headlights with the circular LED daytime running lights. This time, you also get horizontal running lights within them. On the overhead shot, the uncovered vehicle and one of the camouflaged cars are equipped with a large sunroof.

Moving inside, there’s a new cabin layout that’s cleaner and minimalistic. Physical controls remain but the little gauge pod housing a small display mounted on the steering wheel in the current car is gone. Instead, you simply get the pop-up head-up display. Front and center is a round display that’s larger than a dinner plate. That could house all of the infotainment functions but we don’t know how large the actual display is.

The next-generation Mini Hardtop is part of the brand’s new model offensive, which will see the launch of four new vehicles from 2023 to 2025. Starting it off will be the Hardtop, which will be sold in internal combustion and battery-electric variants. It will be followed by a new subcompact crossover that will be Mini’s first dedicated EV. The third-generation Countryman launches in 2023 with a plug-in hybrid variant using the same powertrain as the new BMW 2 Series Active Tourer. Finally, the Convertible will round out the model lineup when it arrives in 2025 as an EV.

All of the new Mini models will likely be on the BMW Group’s FAAR platform, which was developed to accommodate internal combustion, hybrid, and battery-electric powertrains. Mini will gradually transition into an all-electric brandby 2030, offering hybrids as a stepping stone toward EVs. The internal combustion version of the next-generation Hardtop, for instance, will have a not-so-mild 48-volt system with a 19-hp electric motor coupled to the 1.5-liter turbo-three to make 218 hp combined.

Production of the next-generation Mini models will be spread across the world. This uncamouflaged prototype was caught in China, which is where the EVs will be produced. The next Convertible will remain in Oxford, England while the next Countryman will be the first Mini built in Germany. Expect the next-generation Mini Cooper SE to make extensive use of recycled and sustainably sourced materials for the interior since the BMW Group has fully committed to using more secondary raw components.