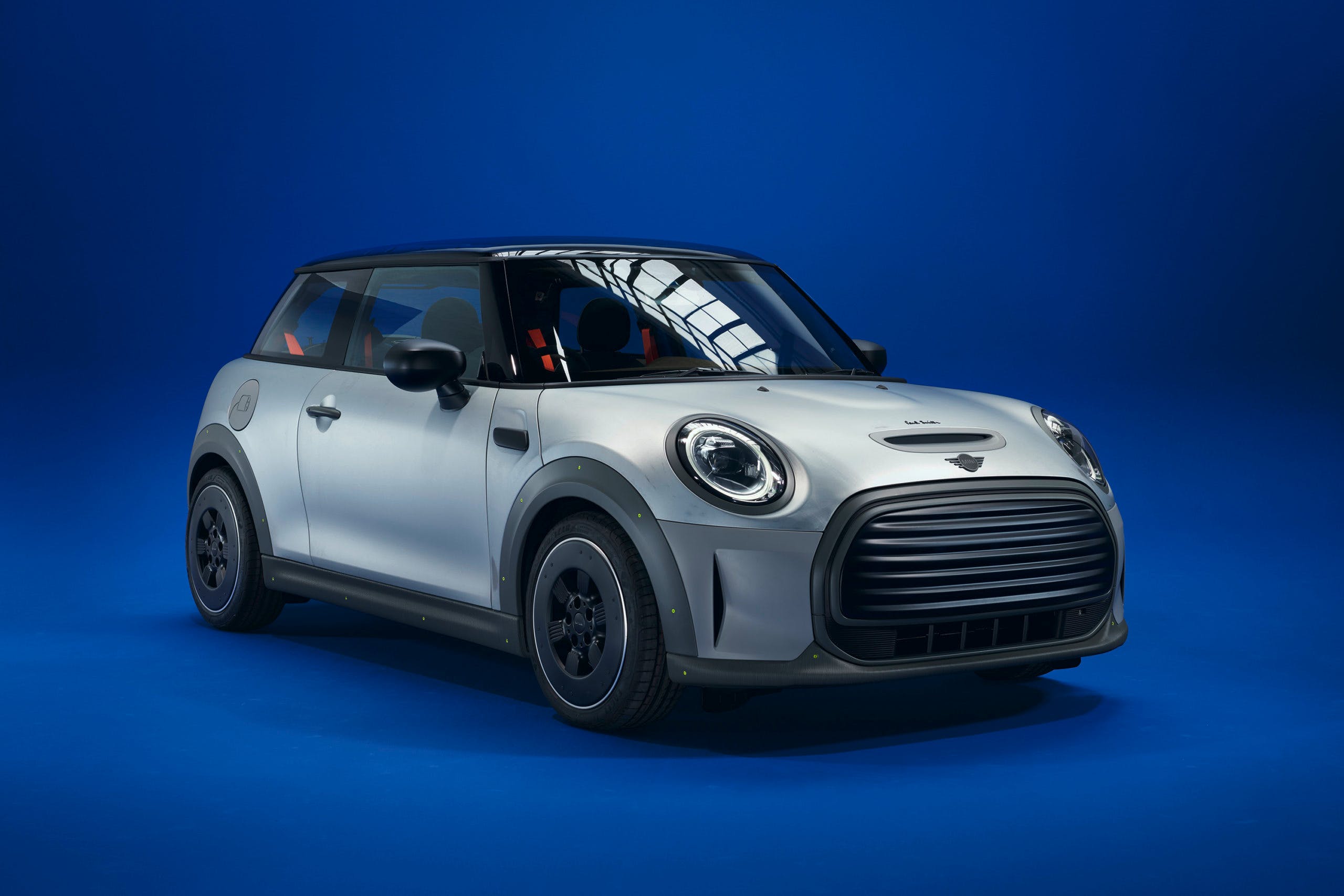 Mini has unveiled a one-off collaboration with Paul Smith in London to show off their idea of sustainable design. Dubbed the Mini Strip, this special Mini Cooper SE Hardtop was designed with the theme “Simplicity, Transparency, Sustainability” to showcase new ideas for automotive design. The car was completely stripped of its interior down to the structural basics. From there, only the elements that the designer viewed as necessary were defined and implemented with sustainability being the key driver of the project.

The  Mini Strip’s exterior got a unique look thanks to a different approach to minimalist design. Raw materials were deliberately used on the exterior, giving the car an unfinished appearance since there’s only a thin film of transparent paint used to protect against corrosion. Grinding marks from the factory were also left intact on the steel panels as a way to identify the car as a functional object and a tool for daily life. Certain sections of the car were 3D-printed out of recycled plastics with its material qualities left exposed. Inserts in the front and rear were also done through 3D printing to achieve their special texture. The enclosed grille and the trim around it, wheel covers, and the panoramic sunroof use recycled Perspex to save weight and resources.

Inside, you’ll find Paul Smith’s trademark stripes in five colors. All trims have been omitted from the cabin except for the dashboard, meaning you’ll see exposed pieces of the body shell finished in blue. The dash itself consists of a semi-transparent section with a smoked glass finish and the instrument cluster has been removed. Instead, you get a place to put your smartphone in that automatically connects with the car to function as your infotainment system. The only physical controls are on the center stack for the windows and vehicle start/stop.

Most of the materials inside are recycled and environmentally friendly to highlight the Mini Strip’s sustainability credentials. Instead of leather and chrome, you’ll find knitted fabric for the seat upholstery, which uses only one type of material to ensure that they’re fully recyclable. Even the contrast piping is made of reusable material. The dashboard and upper door utilize recycled cork without any synthetic binding agents so that they can be recycled. Since cork and knitted fabric are open-pore components, they also improve the car’s interior acoustics.

Further pushing the minimalist design are parts pared down to their most essential functions. The steering wheel rim, for example, has been wrapped in handlebar tape and its impact absorber has been covered in mesh, exposing the air bag inside. You’ll also see visible screws, which show how easy it is to remove the steering wheel and reuse the aluminum it’s made of. The same mesh on the steering wheel is also found on the door panels, exposing its structure within the frame. Interior door handles are made of climbing rope that’s been wound together and are color matched with the orange seat belts. Mini used milled aluminum for the latches that open the doors. Look above and you’ll notice the exposed side curtain air bags courtesy of the lack of headliner.

The purpose of the Mini Strip was to show off what can be done when designing a vehicle with sustainability, transparency, and simplicity in mind. These key themes are likely to become part of the brand’s design ethos as it transitions to full electrification by the early 2030s. This also falls in line with parent company BMW Group’s greater sustainability and battery-electric initiatives.