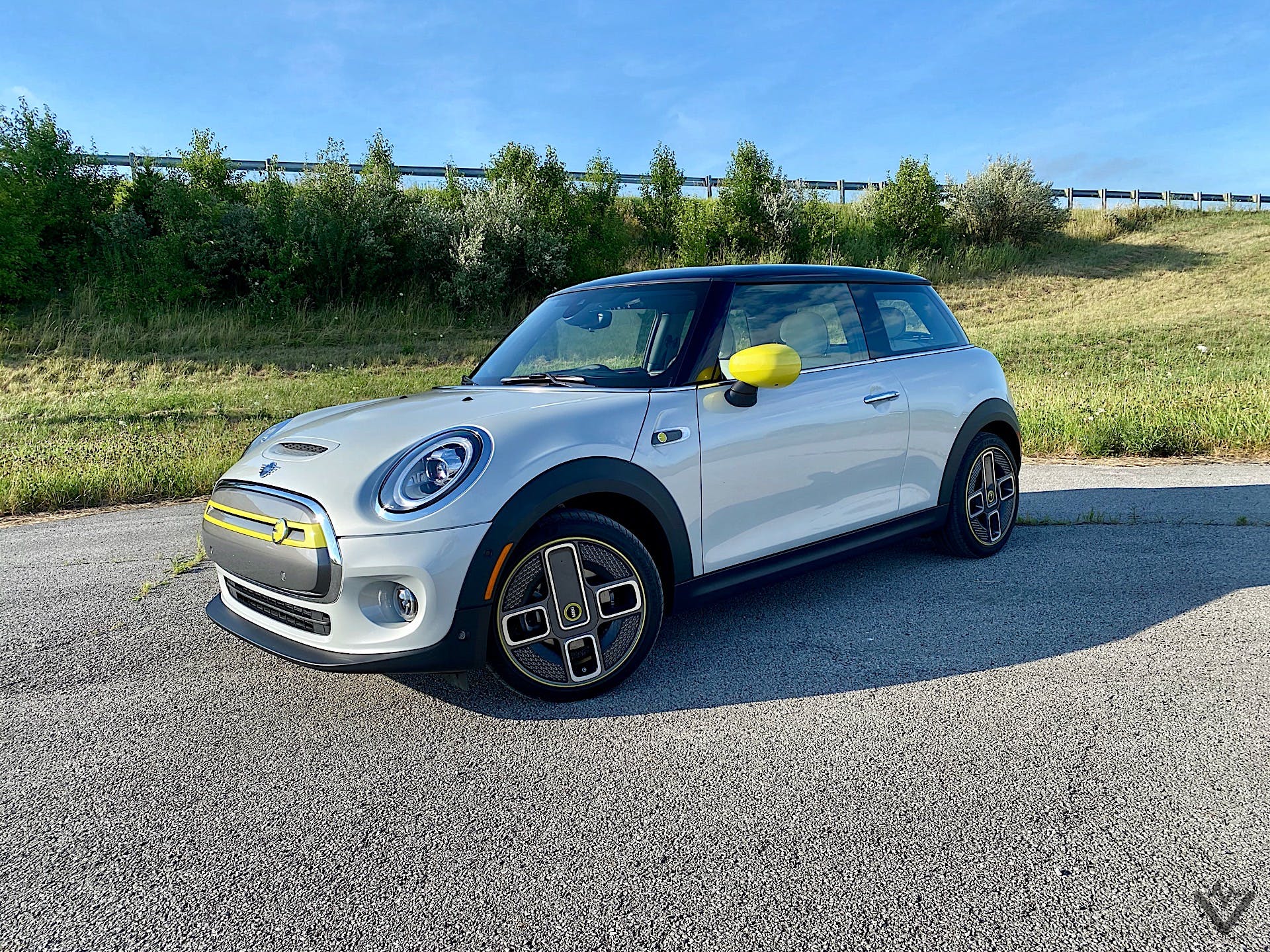 When Mini announced the Cooper S E, the fully-electric 2-door Mini Cooper, critics instantly attacked it for the range. With only 110-miles of EPA certified range, that surely wouldn’t be enough for someone to live with every day, especially in the winter.

But when you get behind the wheel and drive it, you realize that 110 miles is enough for most people most of the time, and you get the added benefit of having an absolutely delightful driving experience. No, it’s unlikely to be your only car, but it can be your fun day-to-day car.

For those familiar with the modern Mini lineup, the Cooper S E will look familiar. Its bodywork is similar to what you would get on the gasoline-powered Mini Cooper S. That means a retro-inspired design in a relatively small package.

Up front, a silver cover replaces the grille — the car doesn’t need outside air to cool an engine — and it is flanked by round LED headlights. A LED ring surrounds the headlights and function as the daytime running lights and vehicle turn signal. A set of LED fog lights flank the lower front of the bumper.

A yellow strip with the Mini E logo crosses the front, and the mirrors have yellow skull caps. The side profile looks just like any other Mini, but our test unit’s wheels that come on the Iconic trim level look like the three-prong outlet that is used in the United Kingdom.

At the rear, the only real difference between the S E and a regular Cooper S is there is no tailpipe and there is an electric Mini badge. The LED taillights do resemble the British Union Jack flag when lit up, which is a nice touch.

Unless you know what you’re looking for, the Mini Cooper S E looks like any other Mini. That means it’s stylish, but won’t scream “look at me I’m green!”

The Mini Cooper S E carries over the retro look from the exterior inside. A nice chunky steering wheel greets you with a digital instrument cluster that is new to the Mini lineup. It provides you the basic information you need: speed, range, battery capacity and time. It’s not as configurable as I’d like, but it is easy to read in most light.

A row of toggle switches controls most of the functions of the vehicle, including starting up the car to get going.

The toggles also control the amount of regenerative braking you’d like, turning on and off the parking sensors, disabling traction control, and changing the driving modes.

Above that is the climate controls. Even though it’s a relatively small cabin, the Mini does have dual-zone climate control. One nifty touch on Minis is you can control how much fan blows even in the automatic mode.

The front seats offer plenty of room for a driver and front passenger. Like all Minis, the seats are manually adjustable only. It’s easy enough to get comfortable, especially with extended thigh support, but on a car of this price the seats should be power.

The rear seats are borderline useless. But that’s expected with a car of this size. They can be folded down to give you more storage space in the rear of the vehicle, which you’re going to want to do even for moderate grocery shopping trips.

Mini’s infotainment system should look familiar to any BMW driver, as it is a variant of the system found in those vehicles. It’s controlled by either the touch screen or a dial and buttons near the arm rest.

Steering wheel mounted controls provide redundancy for the stereo, and the heads-up display in the Iconic trim can also show track information along with speed and other performance metrics.

There’s also a wireless charging dock in the center console as part of the Iconic trim that wasn’t big enough to hold my iPhone with an Apple leather case on it.

The Mini Cooper S E has a SAE/CCS combo charging port on board and can charge at up to 5okW on a DC fast charger. Mini claims that can charge the car to 80-percent capacity in just 30 minutes from zero.

With nearly 200 lb-ft of torque and a solid amount of horsepower, the Mini Cooper S E feels quick. That is especially true at around-the-town speeds. It’s easy to exploit a gap in traffic.

On the highway, the Cooper S E can reach highway speeds no problem, and with a claimed top speed of 93 mph, it’s fast enough for any road in the United States. What is surprising is how quiet the car is at those speeds. Yes, there’s no engine making noise, but Mini have gone to considerable length to make the car comfortable on the highway as a long-distance cruiser.

The front-wheel drive Cooper S E does exhibit some torque steer under hard acceleration, but that’s to be expected with that much torque to the front wheels. It’s manageable, and won’t rip the steering wheel out of your hand like some older front-wheel drive performance cars might.

It’s just a genuinely fun car to drive. And the 110-mile estimate range was fairly accurate in our non-scientific testing. In the summertime, it’s relatively easy to get 120-130 miles out of battery pack. There will be a penalty in the winter, of course, but the Cooper S E does use a heat pump for cabin heat, which will help a little bit.

While the Cooper S E is a fantastic driver, storage space leaves a lot to be desired. The back seats basically serve as a tray to carry stuff, since nobody with legs is going to want to sit back there.

With only 7.5 cu-ft of storage space with the rear seats up, you’re probably going to end up folding them down and leaving them down. I did, and I only had the car for a week.

It can handle a run to the shops, for sure. But if you need to carry more than one other person, or if you frequently carry cargo, the Mini Cooper S E might not be the right car for you.

The Mini Cooper S E starts at $29,900 before the obligatory $850 destination and handling charge. There are three trim levels; Signature, Signature Plus and Iconic. The EV Pulse test unit was an Iconic that cost, with destination, $37,750.

If you don’t need all of the bells and whistles the base Cooper S E is a heck of a deal. It comes with navigation and heated front seats as standard. Also every trim has LED headlights and taillights for added safety. Plus, Apple Car Play is also standard.

If you can take full advantage of the federal tax credit, which at the time of this writing is still available, you are realistically paying around $23,000 for this car. That is extremely compelling.

The Mini Cooper S E is a fantastic car. Yes, I’d like to have more space for things, but as a daily driver it’s nearly perfect. It has plenty of performance, it’s easy to drive, it’s easy to park, and it’s a heck of a lot of fun to drive.

There are enough DC fast chargers around that you can take some road trips with the car, especially if you live in an area serviced by Electrify America — they seem to be the most reliable for me. But if you do spend your time driving long distances, it’s understandable why you’d want more range.

Overall though, the Mini Cooper S E is great, and it’s an easy car to recommend to someone who wants to go electric, still have fun driving and doesn’t want the expense of a Tesla badge.

Disclosure: Mini provided this vehicle and insurance for this review. Our opinions are our own.