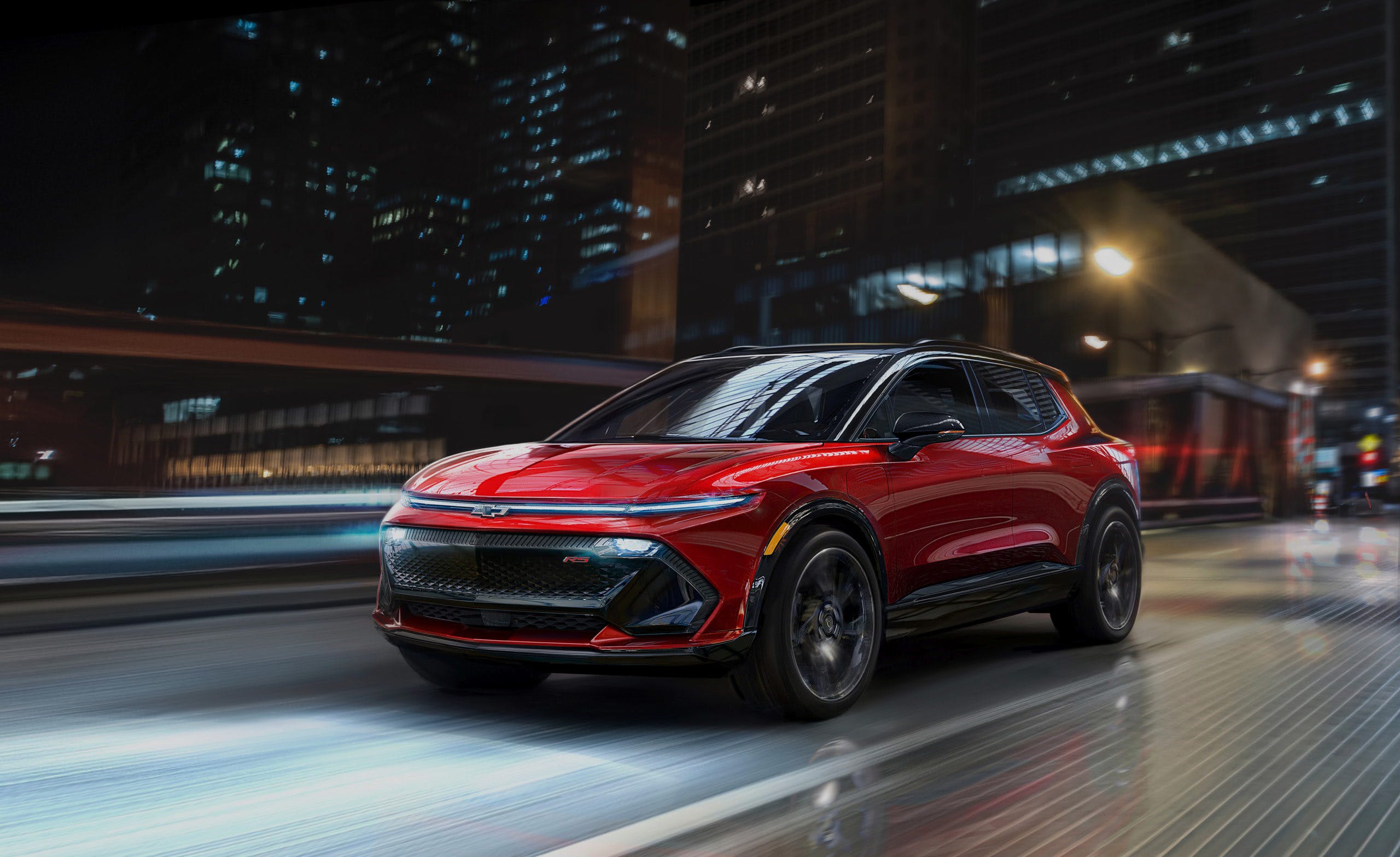 General Motors made a surprise announcement at the 2022 CES Show when it revealed the first photos of the 2024 Chevrolet Equinox EV. This will be the latest addition to Chevrolet’s lineup of battery-electric vehicles and its second vehicle on the Ultium suite after the Silverado EV. GM says that it will offer both fleet and retail versions including the LT and RS grades. Best of all, the Equinox EV will have a starting price of around $30,000. However, the company didn’t reveal much else.

“The Equinox has always played an important role for Chevrolet as the second-highest selling brand nameplate,” said Steve Hill, Vice President of Chevrolet. “Providing an affordable EV option in the industry’s highest-volume segment proves Chevy is going to make EVs available to everyone.”

Based on the photos released by GM, the 2024 Chevrolet Equinox EV is a sharp-looking compact crossover. It features the same design details found in the Silverado EV but shrunken down to a smaller size. These include the grille-free front fascia and full-width LED daytime running lights. In some angles, the crossover looks like a slightly lifted hatchback because of the shape of its greenhouse and thick C-pillar. The back has full-width taillights and a nearly vertical rear window, giving the Equinox EV an upright silhouette instead of the wedgelike shape that’s common with most battery-electric crossovers.

We also get a glimpse of the Equinox EV’s interior, which looks downright awesome. Like the other Ultium-based vehicles, there’s a massive main display and a digital gauge cluster. The former appears to be slightly smaller than the 17.0-inch touch screen on the Silverado EV but it will likely be the largest in the compact crossover segment. It also looks like it’s angled slightly toward the driver, which could indicate that the Equinox EV may turn into one of the sportier entries in the compact crossover segment.

There also appears to be a lot of clever storage solutions including the big cubby between the driver and front passenger. Chevrolet Also appears to have relocated the gear selector to the dash from the center console. Two-tone red and black upholstery appears to hint that this specific vehicle may be an RS model. A second interior sketch with a blue and white interior could hint at a more luxurious variant of the Equinox EV and also shows a projector for a head-up display. The slot to the left of the cupholders is dedicated specifically to your smartphone because USB-C ports are peeking out of it.

Although we know that the 2024 Equinox EV will use the Ultium suite, don’t expect it to get prodigious levels of power like the Silverado EV. It’ll likely be offered in single- and dual-motor configurations, with the latter possibly offering over 300 hp. The former should have the most range. This vehicle has the potential to challenge the Tesla Model Y especially considering its low starting price and the Ultium suite’s capabilities, which include DC charging at peak rates of up to 350 kW. In terms of battery size, the Equinox EV will likely use a smaller pack that should roughly be around 60- to 80-kWh.

The 2024 Chevrolet Equinox EV is just the first of a whole range of Ultium-based battery-electric vehicles coming from General Motors. Following it and the Silverado EV is the Blazer EV and a range of electric crossover for the Buick brand.