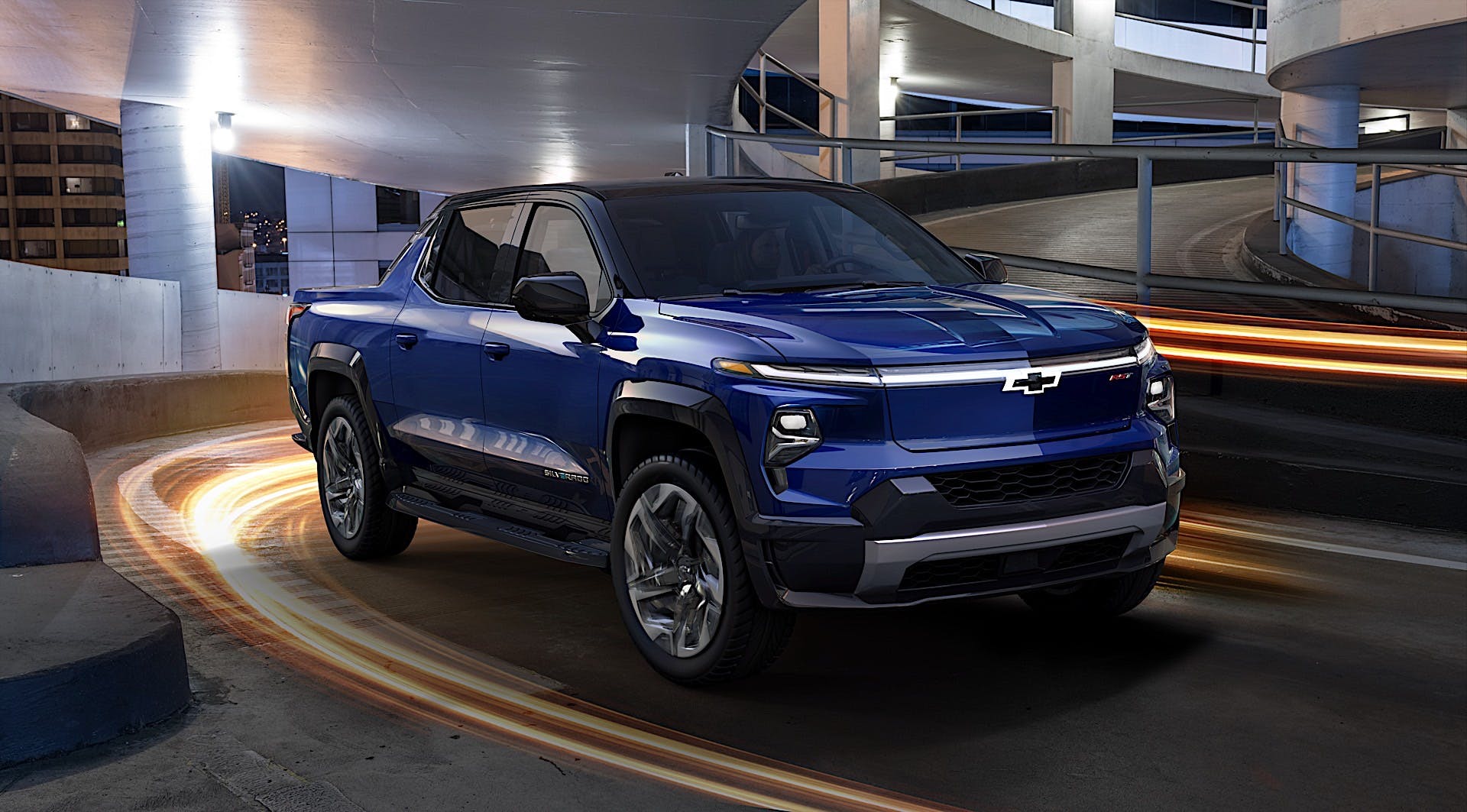 The wraps have finally come off the highly anticipated 2023 Chevrolet Silverado EV at the 2022 CES Show. Developed from the ground up as a battery-electric vehicle, the Silverado EV is underpinned by General Motors’ Ultium platform. GM says that this truck can travel up to 400 miles on a single charge and has a maximum towing capacity of up to 10,000 pounds.

When it arrives next year, the 2024 Chevrolet Silverado EV will be initially available in WT or RST First Edition model. The latter gets adaptive air suspension and four-wheel steering. It will also come with a massive 17.0-inch main touch screen, a reconfigurable 11.0-inch digital gauge cluster, and a 14.0-inch head-up display. The RST First Edition also includes a new version of the Super Cruise semi-autonomous driver assistance system that works when towing a trailer. You can also opt for massive 24-inch wheels on the RST model.

Launching first will be the WT model, which will have 510 hp and 615 lb-ft of torque from its two electric motors. It will be capable of towing 8,000 pounds or carrying 1,200 pounds of payload. Later down the line, Chevrolet will introduce a fleet model with up to 20,000 pounds of max trailering when equipped with the Max Tow package. The RST model offers even more power at up to 664 hp and 780 lb-ft in Wide Open Watts mode, which is likely Chevrolet speak for launch control. This allows the Silverado EV to hit 60 mph in under 4.5 seconds.

You’ll be able to tell the difference between the conventional Silverado full-size truck and the all-electric version. The latter has a more streamlined yet futuristic look that ditches the traditional grille to improve its aerodynamics. GM says the WT has one of the lowest drag coefficients of any full-size truck, enabling it to get over 400 miles of range. It will also be available only in crew cab configuration with a six-foot bed. The rear seats have been pushed back to maximize passenger space.

There are lots of clever storage solutions in the Silverado EV. In addition to a big frunk, Chevrolet bought back the Multi-Flex midgate that originally debuted in the Avalanche, giving it up to 9.0 feet of storage between the cab and tailgate. That doesn’t come at the cost of passenger capacity because the second-row splits 60/40 and has four configurations, enabling you to carry a mix of equipment and people. The available Multi-Flex tailgate allows the Silverado EV RST to have up to 10 feet, 10 inches of load floor and storage. There’s also an available tonneau cover to protect your equipment from the elements. Inside, GM added a modular center console that’s good for up to 7 gallons, enough for a lunch cooler. There’s also a fixed glass roof for increased passenger headroom.

Under the skin, the Silverado EV uses a 24-module Ultium battery, likely a similar unit to the one found on the GMC Hummer EV. It also features independent suspension on all four corners, which Chevrolet promises will provide good ride and handling. The four-wheel steering system offers improved low-speed maneuverability and improves stability at high speeds, especially when pulling a trailer. Both the RST and WT variants will come with a Tow/Haul mode, trailer hitch attachment points, Hitch Guidance, and an integrated trailer brake controller.

DC charging speeds for the 2024 Silverado EV peak at 350 kW, allowing the truck to regain 100 miles in 10 minutes according to GM. There’s also an accessory power bar that gives you 10 outlets when combined with the PowerBase charging system. These provide up to 10.2 kW of power for your work equipment, big kid toys, a home, or to charge another EV via the available charge cord accessory. RST owners will get access to Ultium Charge 360, which should simplify the charging experience. WT customers, on the other hand, will have Ultium Charge 360 Fleet, which has been tailored specifically for businesses.

The Silverado EV gets some of GM’s latest technologies including a cool welcome greeting as you approach it. Once inside, a 3D animation takes place on the 17-inch main display and 11.0-inch gauge cluster. This is viable thanks to Ultifi, GM’s in-house-developed, Linux-based software platform, which will also enable over-the-air updates.

The 2024 Chevrolet Silverado EV will be built at GM’s Factory Zero, Detroit-Hamtramck Assembly Center. This facility was repurposed and retooled especially for EV production with an investment of $2.2 billion. Going on sale first will be the WT variant, which is due out in spring 2023. The RST First Edition arrives in fall 2023 and will cost you around $105,000. Once production ramps up, Chevrolet will roll out the full Silverado EV range, which also includes a Trail Boss model. Prices will range from $50,000 to $80,000 or higher depending on the equipment and trim level.