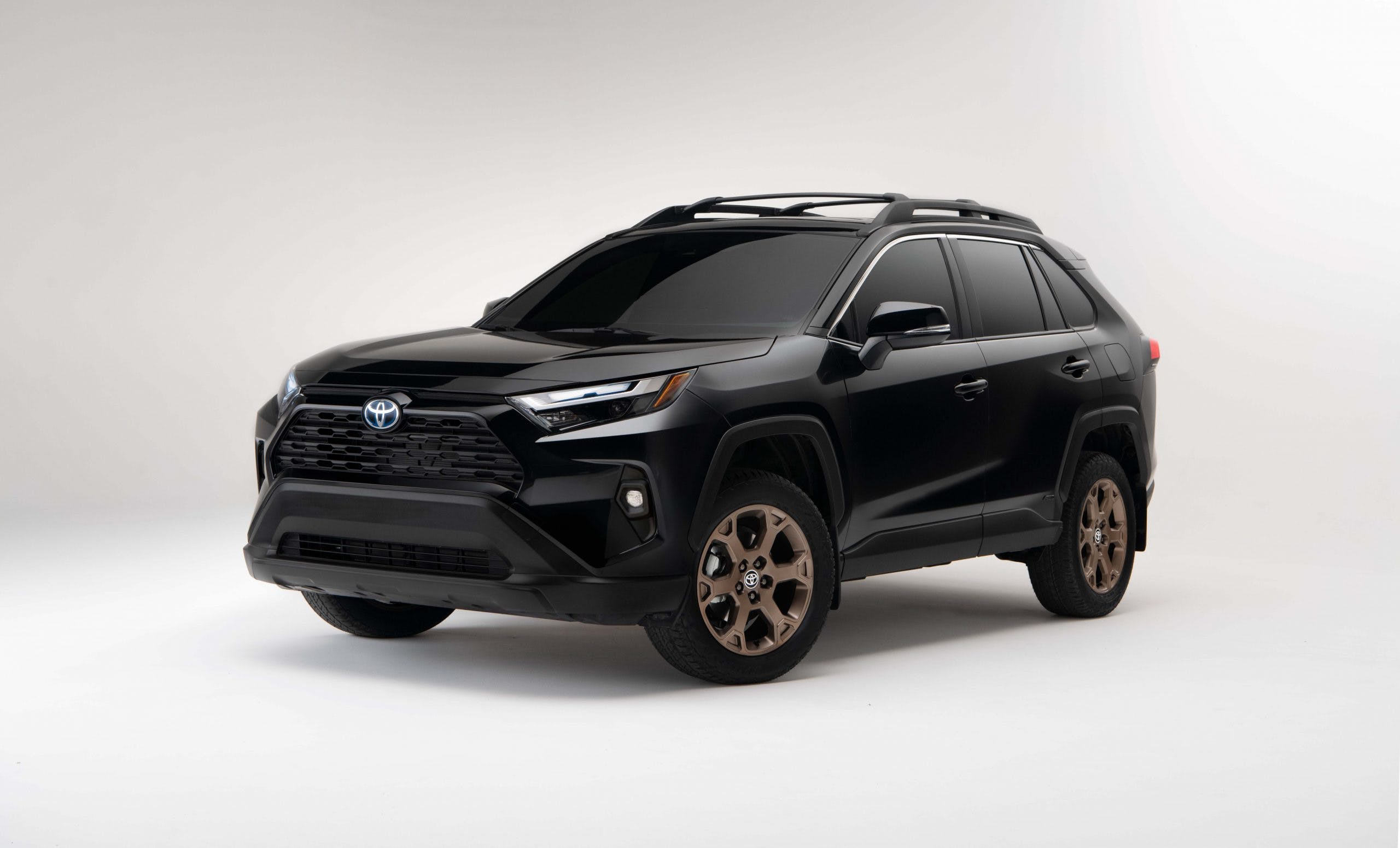 Since the current generation RAV4 arrived, the only way to get an off-road-oriented version was with the pure internal combustion variant. That changes now thanks to the addition of the 2023 Toyota RAV4 Hybrid Woodland Edition. This is the second electrified vehicle to get outdoorsy treatment following the Sienna.

The 2023 Toyota RAV4 Hybrid Woodland Edition is the only electrified version of the crossover with a TRD-tuned suspension. Toyota says this improves body control and smooths out rough roads and road imperfections. Its coil springs are tuned for off-road driving while the bump stops maximize compression and the direction of wheel travel. Twin-tube shocks have internal rebound springs and unique valving for better body control. Every RAV4 Hybrid Woodland Edition also gets Falken Wildpeak all-terrain tires.

Power comes from Toyota’s tried and true hybrid powertrain. It couples a 2.5-liter four-cylinder with three electric motors, a lithium-ion battery, and a planetary gear set for a combined output of 219 hp. Expect fuel economy ratings of 41/38/40 mpg city/highway/combined to remain even on the Woodland Edition model. The RAV4 Prime takes the same system and adds a more powerful front electric drive motor and a larger 18.1-kWh battery, increasing the combined output to 302 hp. This version travels up to 42 miles in all-electric mode and is EPA-rated at 40/36/38 mpg or 600 miles when driven as a hybrid.

For 2023, the RAV4 Hybrid gets Toyota’s new multimedia system featuring an 8.0-inch touch screen on LE, XLE, and XLE Premium grades. XSE and Limited models on both the standard hybrid and the plug-in RAV4 Prime get a larger 10.5-inch display. A 7.0-inch instrument cluster display is standard on all but the Limited Hybrid and XSE Prime models. Those get a 12.3-inch digital gauge cluster, which is also available as an option in XLE Premium and XSE versions of the standard hybrid. In addition to wireless Apple CarPlay and Android Auto, the new interface gets over-the-air (OTA) updates, a virtual assistant, Google Points-of-Interest data, and an optional cloud-based built-in navigation.

When it arrives later this year, the 2023 Toyota RAV4 Hybrid Woodland Edition will be the only off-road-oriented compact SUV with an electrified powertrain.

At the moment, the Jeep Cherokee, Ford Bronco Sport, Subaru Forester Wilderness, Hyundai Tucson XRT, Mazda CX-50, and Kia Sportage X-Pro are only available as purely internal combustion vehicles. Its closest competitor also arrives later this year in the 2023 Kia Sportage PHEV, which is offered only in X-Line or X-Line Prestige grades. However, that’s more of a cosmetic package and doesn’t get any suspension tweaks or knobbier tires.