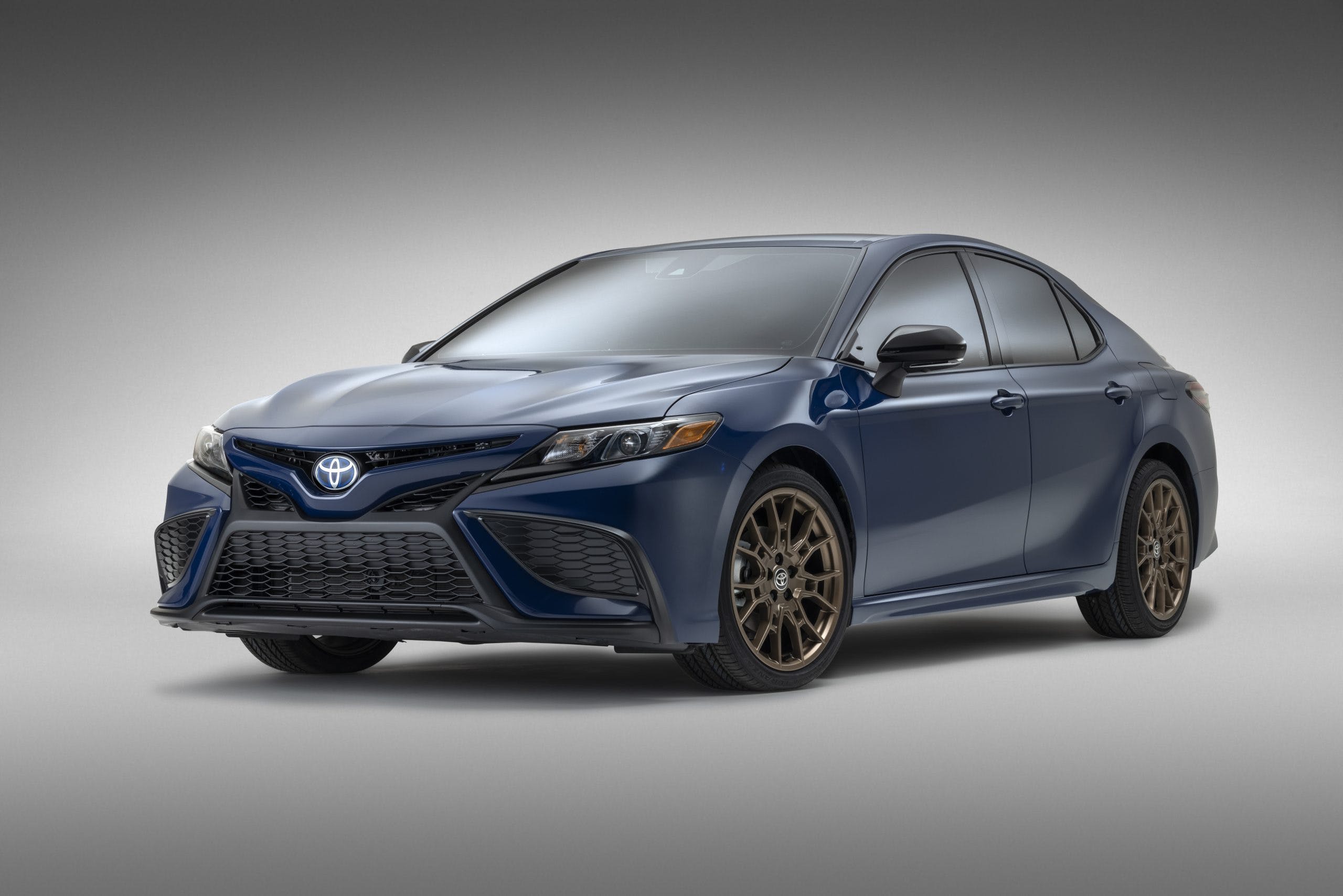 The 2023 Toyota Camry Hybrid has been announced and the big news for the new model year is the revamped Nightshade Edition. Based on the SE grade, the new cosmetic package adds side mirror covers, exterior badges, a rear spoiler, headlight and taillight trim, door handles, window surrounds and side skirts all finished in black. The most notable additions to the Camry Hybrid Nightshade Edition are the new matte bronze 19-inch alloy wheels replacing the black 18-inch units. However, you’re limited to three exterior colors: Midnight Black, White, and Reservoir Blue, the third of which is a new addition.

According to Toyota, sales of the Camry Nightshade Edition have been growing with the model accounting for 5% of sales in 2021. For 2022, it is on track to make up 7%. Since it’s based on the SE grade, the Nightshade Edition slots in the middle of the lineup splitting the difference between the two lower trims and the more expensive XLE and XSE variants. Additional standard features included SofTex leatherette upholstery with fabric inserts, a sport-tuned suspension, LED headlights, keyless entry/start, and a power-operated driver’s seat.

Unfortunately, the Camry Hybrid didn’t get Toyota’s latest infotainment system and makes do with the older interface with a 7.0-inch touch screen complemented by a 4.2-inch display within the gauge cluster. At least Apple CarPlay and Android Auto are standard.

If you’re looking for more features, you’ll need to move up to the XLE or XSE variants. Like the LE, SE, and Nightshade Edition, they each have a different front end with the latter being the sportier variant. The former is the more comfort-oriented of the two and has a unique wide grille. XLE and XSE grades offer leather upholstery, heated and ventilated front seats, a JBL audio system, a 7.0-inch gauge cluster display, a larger 9.0-inch touch screen, and a surround-view camera. XSE models are also the only ones available with the two-tone exterior colors.

Power comes from Toyota’s workhorse hybrid system that’s also found in other vehicles including the RAV4, Sienna, Venza, Highlander, Avalon, and Lexus’ ES and NX. It couples a 2.5-liter four-cylinder with two electric motors, a lithium-ion battery, and a planetary gear set for a combined output of 208 hp. In some models, the system adds a third electric motor on the rear axle, giving those vehicles e-AWD for additional traction in harsh weather conditions like snow. The base LE grade is the most efficient at 51/53/52 mpg city/highway/combined. SE, XLE, and XSE variants are rated lower at 44/47/46 mpg.

The Camry Hybrid gets the Toyota Safet Sense 2.5+ suite of driver assistance features, which is among the newer ones. It includes the usual suspects like forward collision warning, front automatic emergency braking, pedestrian, lane centering, adaptive cruise control, and automatic high beams. The big difference here is that this suite now includes intersection assist, which expands to the operating zone of the front collision prevention technologies, enabling them to detect oncoming vehicles, objects, and pedestrians at intersections. Daytime cyclist detection is also included. Emergency steering assist has also been added, allowing the vehicle to assist when making evasive maneuvers around vehicles, cyclists, and people.

Expect the 2023 Toyota Camry Hybrid to go on sale later this year. The current sedan is at the tail end of its life cycle so expect it to get one more model year before the new generation arrives. That’s expected to ditch the V6 engine and replace it with a high-powered plug-in hybrid system similar to the RAV4 Prime.