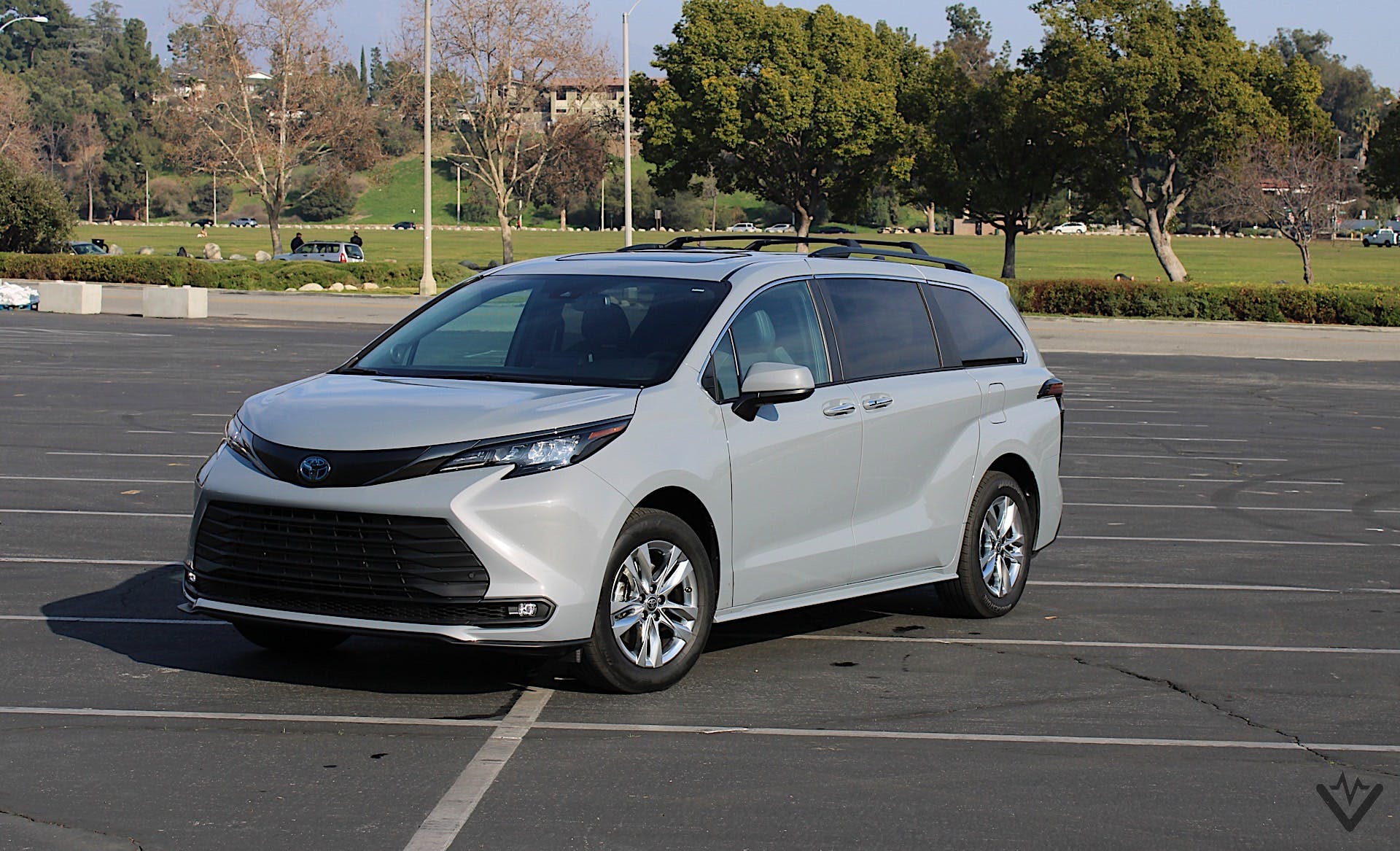 Minivans are the ultimate sensible vehicles. Ideal for families or anyone wanting maximum space, these cars prioritize versatility, practicality, and comfort. The 2022 Toyota Sienna is the latest iteration of a long-running nameplate. This generation now has an electrified powertrain and lots of clever solutions to maximize flexibility. The rugged Woodland Edition is the newest addition to the lineup and promises extra capability to go with its usability.

The 2022 Toyota Sienna is proof that practicality doesn’t have to come at the cost of style. This minivan possesses distinctive looks thanks to its angular new mug complete with curved headlights and a massive grille. Although it’s upright and boxy like every other vehicle of its type, the Sienna has presence. The D-pillar has a bit of a Hofmeister kink going on while the angular taillights evoke its sedan siblings. There’s even a mini duckbill spoiler on the tailgate.

Toyota offers multiple takes on the Sienna from the sporty XSE to the luxury-oriented Limited and Platinum grades. The Woodland Edition is on the rugged side of the spectrum. Based on the seven-seat XLE trim, it’s available in Midnight Black Metallic or Cement exterior colors. Unlike the other variants, the Woodland Edition’s suspension has been lifted by 0.5 inches. It also gets AWD, 18-inch alloy wheels, black rear badges, roof rails with crossbars, and dark chrome exterior accents as standard. Even without the little design cues, it’s easy to distinguish the Sienna Woodland Edition from the rest of the lineup thanks to the larger gaps in the wheel wells.

With hauling people and gear being its primary duty, it’s no surprise that the Sienna Woodland Edition has so many useful storage spaces. There’s a tray spanning the dash, and it’s connected with the center console, which has four cup holders and two slots for phones. The bin between the two front seats is deep and there’s a sizable storage area underneath the center console. Each captain’s chair in the second row even has a bottle holder with a net.

Flexibility is one of the Sienna’s strengths. With all seats up, it can comfortably seat seven or eight passengers while retaining plenty of cargo capacity. The third row easily folds into a tub, giving you a flat floor for big, bulky items. Another unique feature is the second-row captain’s chairs that slide so far forward and back that you can easily convert the Sienna into a four-seat mobile lounge. Unfortunately, with the air bags mounted on the seats, you can’t remove the second row like you can in the Chrysler Pacifica Hybrid. You can push it all the way forward for a total interior volume of 101 cubic feet.

Despite being based on a mid-grade model; the Sienna Woodland Edition’s interior features great build quality. There are lots of padded surfaces and soft-touch plastics in areas you interact with often. Unlike the luxury-oriented Platinum grade, the Woodland Edition exudes a more utilitarian vibe but manages to avoid feeling plasticky. The first two rows get seat inserts with star patterns on them, adding a bit of flair to the cabin. Additional sound insulation would be much appreciated, though; on the highway, you get a noticeable amount of wind noise.

Every Sienna gets Toyota’s Entune 3.0 infotainment system with a 9.0-inch touch screen. This version is one of the better ones because of its simple menu structure and the physical shortcut controls positioned around the main display. Unfortunately, it’s slow to respond to inputs like other iterations of this interface and its graphics are grainy, especially the maps on the available built-in navigation. It’s best to use Apple CarPlay or Android Auto since those provide a better experience. A 12-speaker JBL surround sound system is standard on the Woodland Edition and upper trims of the Sienna and optional on the XSE and XLE variants. It’s crisp, clear, and does a good job covering the huge cabin. We do wish there was a little more customizability beyond the basic selections it offers. A rear-seat entertainment system with an 11.6-inch display is available on all but the base LE model.

During most driving situations, the TSS 2.0 suite operates subtly. It brings you back into your lane gently when you start to drift out and can also help you navigate gentle curves on the freeway if you have adaptive cruise control active. The distancing component veers on the conservative side because it slows the car down sooner even when in the closest setting. This is ideal for a vehicle like the Sienna because its large size means it needs more time to slow down during emergency stops. Additionally, the system also leaves a bigger gap between you and the vehicle ahead regardless of the distance you choose.

Every Sienna gets a hybrid powertrain as standard. It pairs a 2.5-liter four-cylinder with a nickel-metal-hydride battery, two or three electric motors depending on the drivetrain, and a planetary gear set. The combined output is 245 hp. While that’s lower than the outgoing van’s V6 engine, it’s not lacking by any means. Thanks to the instant torque from the electric motors, it’s easy to get the minivan moving from a standstill. When you need full power for passing, merging, or climbing steep inclines, simply put your foot down and the powertrain immediately serves up lots of usable torque to move you along. Since there’s no conventional transmission in Toyota’s FWD-based hybrid systems, you get a smooth linear wave of power, adding to the Sienna’s refinement.

Like most modern hybrids, the Sienna’s brake operation is pretty natural because you don’t get any jolty sensations. Transitions from regenerative to mechanical braking are seamless even though you know where it happens as you ease into the pedal. Front end dive is surprisingly minimal despite the Woodland Edition’s raised suspension, even when you have to suddenly stop. There’s generous energy recuperation, too, enabling you to recharge the battery quickly when you ease off the accelerator. AWD models get additional regeneration thanks to the second electric drive motor on the rear axle.

Comfort remains one of the Toyota Sienna’s strong suits. The suspension soaks up road imperfections nicely, especially with the 18-inch alloy wheels shod with tires that have generous sidewall. Occupants barely feel anything because the minivan essentially glides over ruts, potholes, and expansion joints. On gravel roads, the Woodland Edition is more compliant and easily clears obstacles thanks to the additional travel afforded by the 0.5-inch lift.

Since it’s higher off the ground than the other Sienna models, the Woodland Edition is a softer vehicle. Body roll and vertical motions are more noticeable when you take turns or go over big bumps. It also feels more top-heavy because of its higher center of gravity. Thankfully, the steering remains light and manageable, making it easy to maneuver the Sienna on narrow roads. At higher speeds, it adds just enough weight to keep the minivan from feeling unruly.

There was already a lot to like about the 2022 Toyota Sienna from its efficient yet responsive powertrain to its flexibility and clever storage solutions. It’s the ideal vehicle for families looking to jump into electrification for the first time. With its multitude of versions, there’s one for every want and need. The Woodland Edition adds another option for those looking outside the crossover box. Its additional ground clearance gives you extra wiggle room when driving on gravel yet it retains the comfort levels of the other variants. Positioned as a midlevel model with additional standard equipment, the Woodland Edition brings uniqueness within the reach of most consumers.

If you don’t need the off-road bits, and just want a solid hybrid minivan, the 2022 Toyota Sienna has everything that makes the Woodland Edition a great van without the extra “off the beaten path” features.