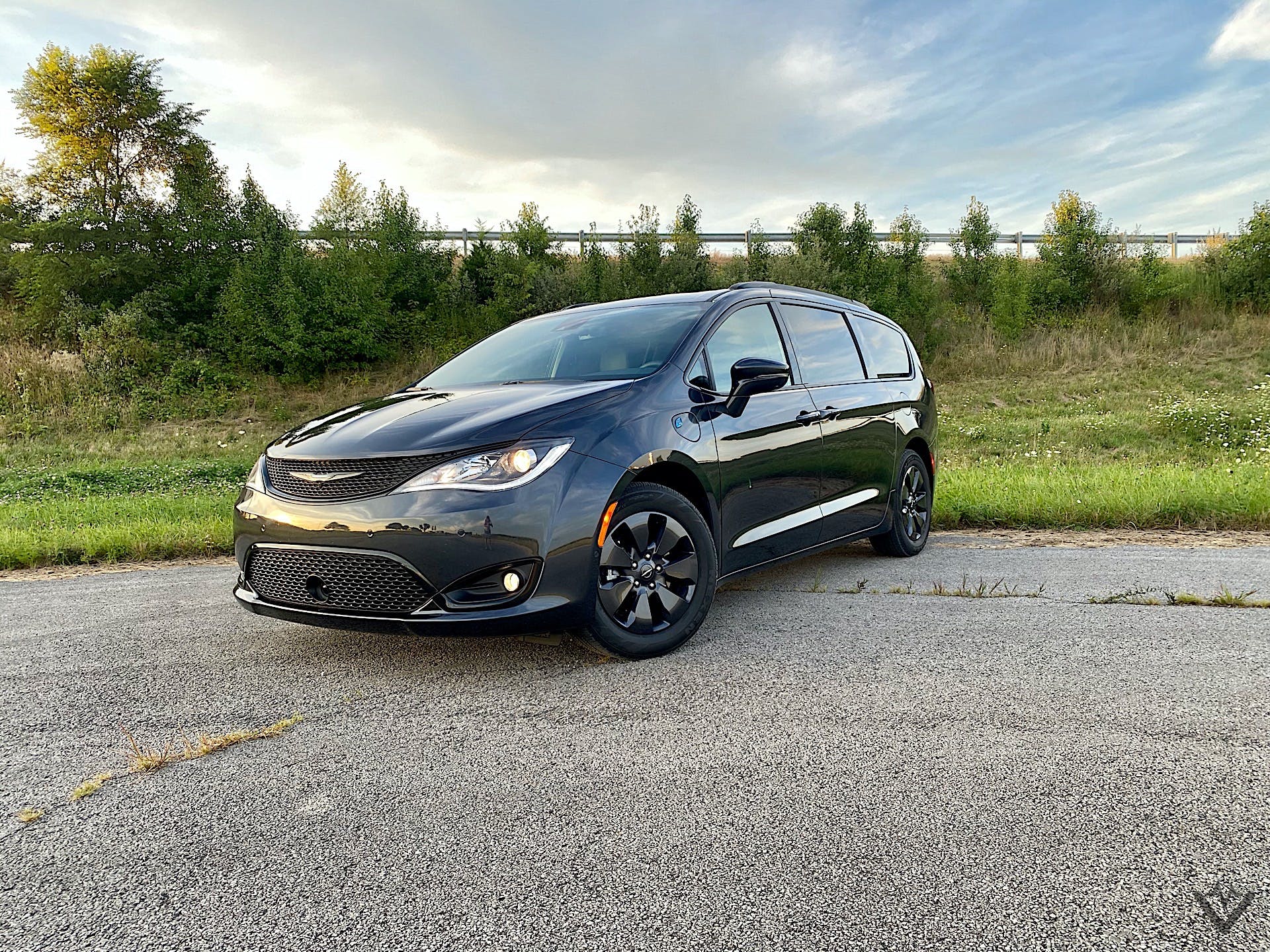 The 2020 Chrysler Pacifica is the only minivan on sale right now that is available as a hybrid. That means, one could argue, that it is both best-in-class and worst-in-class. But judging the Pacifica solely based on the competition would be doing it a disservice. It’s a very good utility vehicle with state-of-the-art tech that also happens to benefit from a plug-in hybrid powertrain.

Yes, it looks like a minivan. It’s hard to disguise that when you have to have sliding doors and usable cargo space. But the Pacifica does a solid job at looking as sporty as it can. The curved front and widened wheel arches help a lot.

Additionally, the S Appearance Package gives you the black wheels and badging outside. The black window surrounds complete the look, and if you spec it in a darker color like our test model, it looks pretty good.

The exterior design is also really smart in regards with how Chrysler deals with the sliding doors. The runners for the doors sit just below the rear windows, and look like they are integrated into the windows. On other minivans — I’m looking at you, Honda — the runners run through the body work and just look bad. The Pacifica conceals it well.

A lip spoiler sits atop of the rear hatch adding a hint of sportiness to the back of the Pacifica, and the LED taillights look smart. But the rest of the rear is rather bland, mostly because you have to have a huge rear opening to get the maximum versatility out of the back.

Everything that has made Chrysler minivans great in the past exist on the 2020 Pacifica. The brand invented the concept of Stow-N-Go seating, and the Pacifica still has it. This allows owners to fold the seats into the floor of the van to free up space, instead of having to remove them.

Unfortunately on the hybrid models, the batteries sit where the 2nd-row would stow away, so the Stow-N-Go functionality is limited to the third row in the hybrid. I hope that as battery technology advances, engineers will find another place to store the batteries to free that space back up.

That doesn’t mean you can’t do anything with the second-row seats. They can be removed like any other minivan, and weigh around 35 pounds.

The S Appearance Package adds fancy S lettering in the seats and a dark leather interior. It also adds gloss black accents, which are attractive but show scratches and fingerprints easily.

Front-row seats are heated and ventilated, and there’s separate climate control for the second-row. There are even vents in the third row, plus USB power ports, so everyone can get air and keep their devices charged.

The rear seat entertainment package is one of the best in the business, because it supports all of the standard stuff — like Blu-ray and video in for consoles — but also has built in games that passengers can play while on a trip. They are linked together so kids can also play 2-player games.

If there is a destination set in the navigation system, the “Are We There Yet?” app shows kids a fun animation that also answers the most common road trip question. I’ve been known to play Tick-tack-toe more than once on FCA programs where they pick you up at the airport in Pacificas.

I don’t know if it’s the perfect road trip vehicle, but it would be on my Top 5 list for sure.

In addition to the optional rear seat entertainment, the front passengers are exposed to Chrysler’s Uconnect infotainment. It supports satellite radio and HD radio, has built in satellite navigation with real-time traffic alerts, and also supports Android Auto and Apple Car Play.

For 2021 models, the Pacifica receives an updated version of the system that adds some cool functionality and makes the Android Auto and Apple Car Play connectivity wireless.

One buys a minivan because they have a family to haul around, so safety is a must. Our test vehicle had autonomous emergency braking, lane departure warning and full-stop adaptive cruise control. We also had blind spot monitoring and automatic high beams.

The Insurance Institute for Highway Safety rated the 2019 version of the Pacifica as a Top Safety Pick. Updated tech for 2021, plus the new LED headlights, should only help to improve the van’s overall score.

The plug-in hybrid Chrysler Pacifica comes with a combined 260 hp and 262 lb-ft of torque. It’s rated for 30 miles of all electric range.

When overtaking on the highway, the Pacifica Hybrid managed to go from 50 mph to 70 mph in a very respectable 2.57 seconds. The car had no problems getting up to speed or maintaining speed or the flow of traffic.

From 70 mph, the 2020 Chrysler Pacifica Hybrid managed to come to a complete stop in 161 feet.

The Pacifica Hybrid is rated for 32 miles of all-electric range, which appears to be accurate in normal usage. You can charge the Pacifica with the included charger on a 110-volt home outlet, which will take approximately 14 hours. If you have a Level 2 charger at home, or find one the go, you can fill the 16 kWh battery pack in 2 hours.

Does that sound a lot like the same times as the Jeep Wrangler 4xe PHEV? Yes, it should. The stats are similar, though the system in the Wrangler is a bit newer than the one in the Pacifica.

The EPA rates the 2020 Pacifica Hybrid at 80 MPGe. On gasoline only it is 30 mpg combined.

The 2020 Chrysler Pacifica Hybrid is a nice van to drive, though it doesn’t necessarily wow in that department. The steering is light for easy maneuverability around town, and the camera and parking sensors make it relatively easy to park.

The Pacifica is quiet at highway speeds, lending even more credence to it being one of my favorite road trip vehicles. The only real annoying noise comes from the gasoline engine when it kicks on at low speeds. It’s a bit jarring in its sound.

The transition is smooth from gasoline to electric, mind you. And at higher speeds the engine sounds fine. But if you’re sitting somewhere or driving at low speeds and it kicks on, it’s surprising.

Living with the Pacifica every day is great, though. The buttons are easily located for kids to open the power sliding doors if they want to (and the vehicle is parked). The rear hatch button is on the side of the cargo area and not on the hatch, which is fantastic for people who are shorter in height. Everything is smartly laid out that it’s obvious that the people who developed this vehicle are parents themselves.

I like the Pacifica Hybrid a lot. Depending on where you live, there can even be some considerable tax benefits by going with this plug-in vehicle, since FCA hasn’t exhausted their tax credit yet. Plus, some states and local governments have deals.

Our fully loaded tester, at $51,025 might seem a bit steep for a van that is going to have kids in it, but there are deals out there. Combined with EV incentives and in some cases the hybrid is less expensive than a comparable gasoline-only version. If you don’t want all the bells and whistles like our Limited model, the Pacifica Hybrid starts at $41,490 with destination.

The only real drawback is if you want all-wheel drive. While Chrysler is adding all-wheel drive to the Pacifica for 2021, the hybrid variant doesn’t receive it.

If that’s not a deal-breaker, and it shouldn’t be, the 2020 Chrysler Pacifica Hybrid PHEV is the minivan to get. Not just because it’s a hybrid van, but because it’s the best van overall to get.

Cons: No Stow-N-Go in 2nd-row. Gas engine a little loud.

(Disclosure: Chrysler provided the vehicle, insurance, and a full tank of gas for the purpose of this review. Our opinions are our own.)