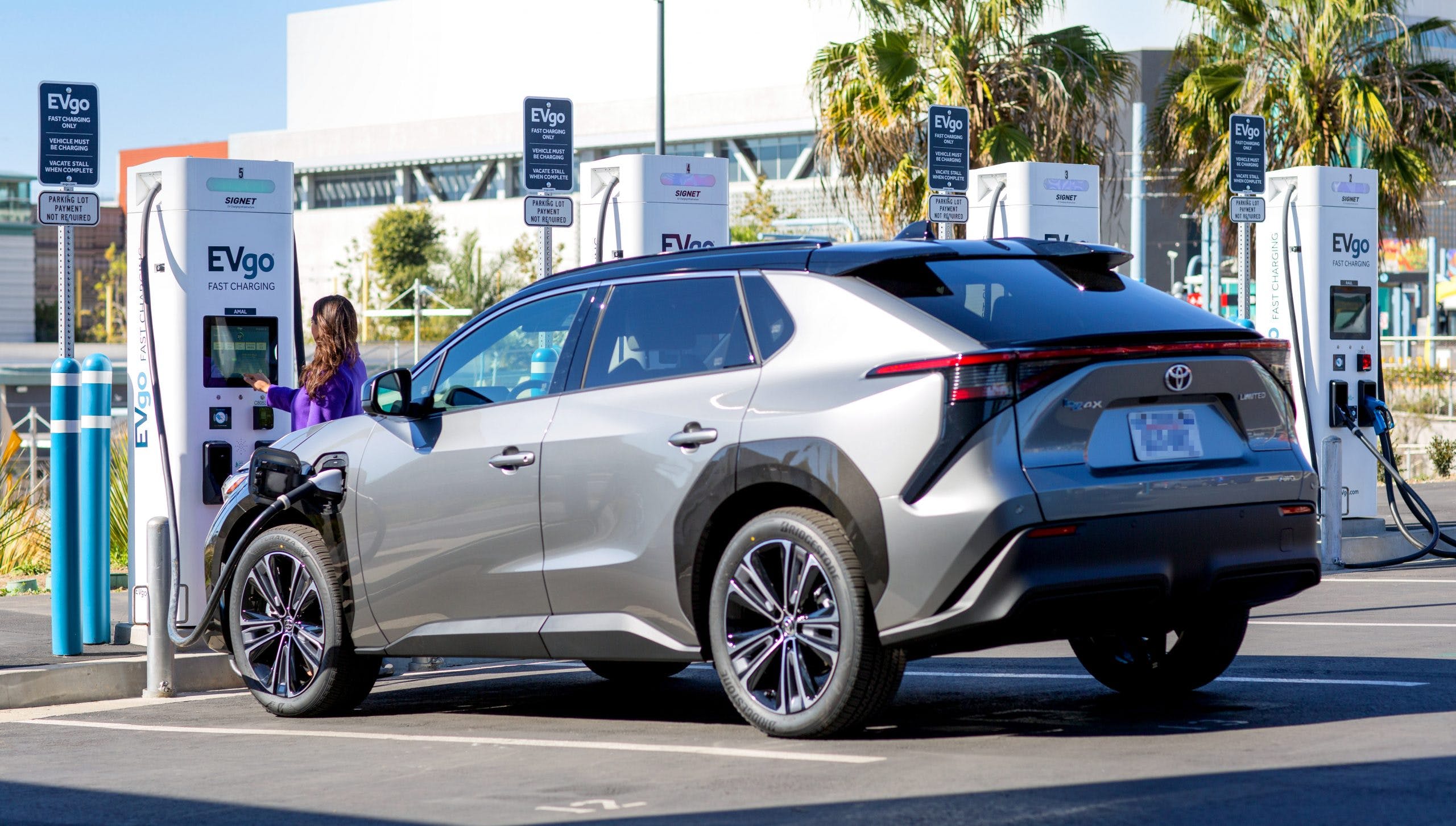 If you’re interested in purchasing the 2023 Toyota bZ4X, you’ll be glad to know that the crossover will come with one year of free charging at EVGo stations. Owners will be able to access this by signing up on the Toyota app and take advantage of the perk. This is the first collaboration between EVGo and Toyota as the latter starts offering battery-electric vehicles in the North American market. EVGo’s charging stations are located strategically at frequently visited locations like grocery stores, central downtown areas, and shopping centers, enabling drivers to take a break while their vehicle is charging.

“The arrival of our all-electric bZ4X marks an important step in our commitment toward electrifying 70% of our fleet by 2030. We want our bZ4X customers to enjoy a high-quality ownership experience that is as seamless and worry-free as possible,” said Christopher Yang, Vice President of EV Charging Solutions at Toyota Motor North America. “Collaborating with EVgo, the nation’s largest public fast-charging network, will help provide bZ4X owners with access to a fast, reliable charge where and when they need it.”

EVGo currently has over 800 DC charging stations and thousands of level 2 AC chargers across 35 states and serves 68 metropolitan areas. Their charging network is also unique because it is powered exclusively by 100 percent renewable energy. Toyota is the latest automaker to partner with EVGo to give owners of BEVs free charging for a set period. It has also partnered with BMW and Ford to provide owners of their vehicles to make BEV ownership seamless. Nissan is also partnering with EVGo to give Leaf owners a $250 charging credit. Those who preordered the new Ariya crossover will get a $500 credit. Subaru will also be partnering with EVGo to offer the same perks for those that purchase the Solterra. It could get the same plan that Toyota includes with the purchase of a bZ4X.

The 2023 bZ4X is Toyota’s first dedicated long-range BEV. In the past, the world’s largest automaker offered battery-electric variants of the RAV4, which was produced for two generations. Codeveloped with Subaru, the bZ4X is built on Toyota’s e-TNGA architecture, which has been tailored specifically for BEV applications. It will be available in single- or dual-motor configurations. The former uses a 201-hp electric motor backed by a 71.4-kWh lithium-ion battery. Like the Subaru Solterra, the dual-motor bZ4X gets two 60 kW motors on each axle for a combined output of 215 hp and 248 lb-ft of torque. It also gets a larger 72.8-kWh battery pack. Expect peak DC charging rates for the bZ4X to hit 150 kW.

Toyota is only getting started with its electrification offensive and the bZ4X starts the next step with the reintroduction of a BEV into the lineup. Expect its driving range to be around 250 miles per charge on the single-motor version. The dual-motor variant should have 220 miles or more if the Solterra is anything to go by. The 2023 Toyota bZ4X is the first of five vehicles under the bZ sub brand, which includes a city car, two more crossovers, and a sedan. Expect the latter three to eventually make it to the North American market. The city car, however, will likely be only for regions like Europe and Japan where space is at a premium.