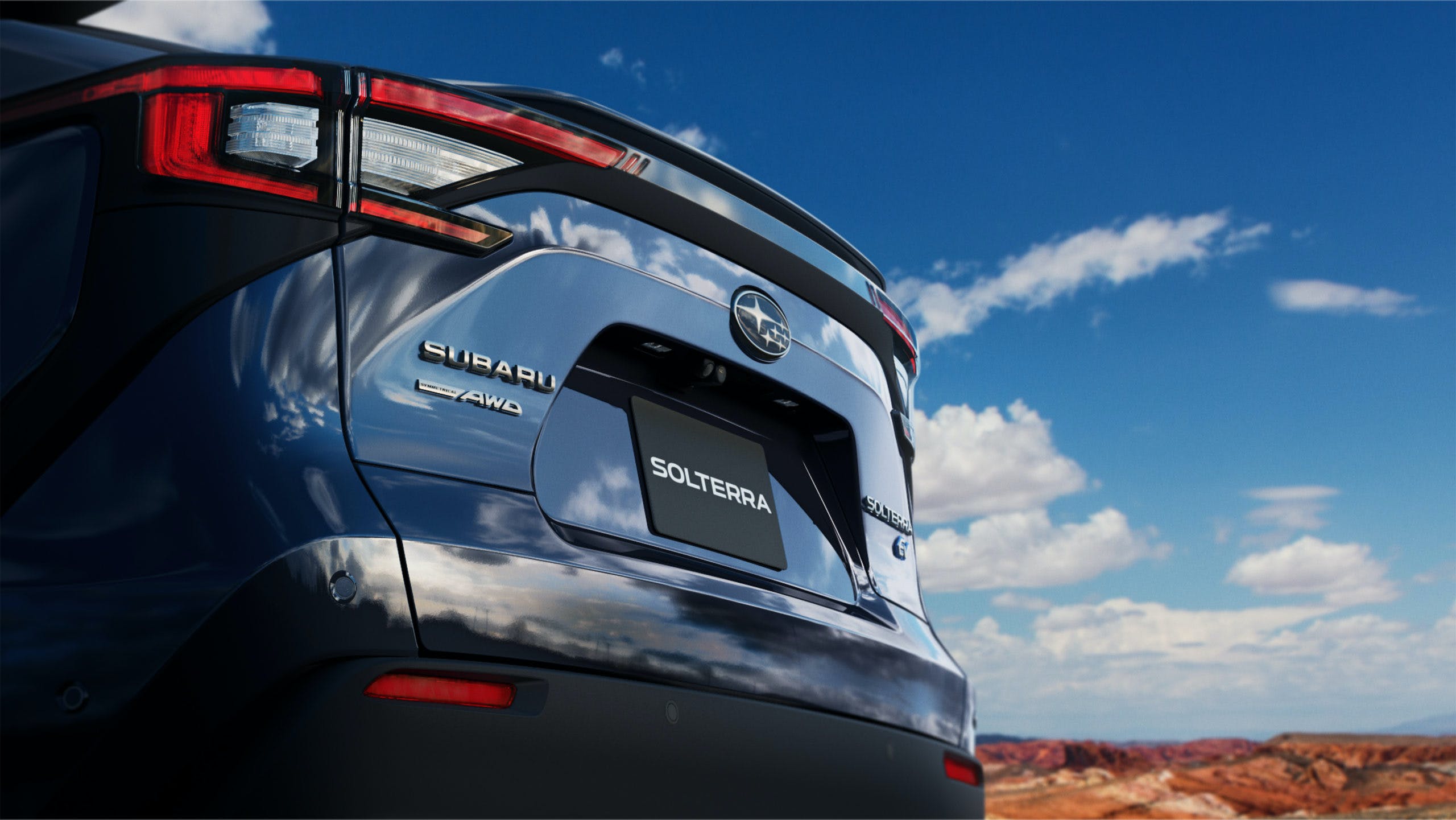 Subaru has teased the 2023 Solterra once again, this time giving us a glimpse of the crossover’s rear end. The Japanese brand’s first battery-electric vehicle is one of the fruits of its collaboration with Toyota. That means the 2023 Subaru Solterra will be mechanically related to the production version of the Toyota bZ4X Concept revealed earlier this year at the 2021 Shanghai auto show.

Based on the sole photo released, the 2023 Subaru Solterra’s exterior design will be similar to its Toyota cousin. You find the same full-width LED taillights and the rear window appears to be dramatically angled just like in the bZ4X Concept. The latter indicates that the Solterra will have the same wedge shape as every other electric crossover but it will be more angular instead of curvaceous.

Like recent collaborations between Toyota and Subaru like the GR 86 and BRZ sports cars, the Solterra will likely get unique design cues. Those should help distinguish one crossover from the other. Both will get an enclosed grille to optimize aerodynamics. You’ll also be able to quickly distinguish the Solterra because it’ll have more ground clearance than its Toyota cousin. The Solterra will also get AWD standard, confirming it will come with two electric motors from the get-go.

The Solterra’s interior will be exactly like the one found on the Toyota bZ4X Concept. The infotainment system, however, will be Subaru’s Starlink interface, which is one of the better units. Instead of a portrait layout, the main display has a landscape orientation. Most of the controls are also capacitive instead of physical ones.

The Solterra will be the first vehicle on the e-Subaru global platform. Subaru promises that the crossover will be roomy, offering generous passenger and cargo capacity. It will also receive Subaru’s full arsenal of driver assistance features, which likely includes the new version of the EyeSight suite that first appeared on the latest Levorg wagon.

With Toyota recently expanding its partnership with Subaru, it’s pretty clear that the Solterra’s underpinnings are its version of the e-TNGA architecture. The modularity of that platform means every company can have its unique version. Toyota co-developed this with several small Japanese automakers including Subaru, Daihatsu, and Suzuki. Alongside Mazda and Denso, these companies make up the alliance that Toyota created to help cut the cost of developing EVs. It’s no surprise that Subaru has taken it and made its iteration fulfill its requirements.

Don’t expect just one version of the e-TNGA platform because the one that will be used in the Solterra and the bZ4X is just the first iteration. Daihatsu and Suzuki are working alongside Toyota for a version specifically for compact cars. It won’t surprise anyone if Mazda is developing one for sportier applications, which could be the Skyactiv-EV platform it announced nearly three months ago.

Subaru hasn’t announced how much power the Solterra will make but considering it has AWD standard, it’ll likely be fairly generous. The instant torque from the two electric motors and extra ground clearance should help the crossover get through dirt roads safely. There’s no word on how big the battery in the Solterra will be. Considering most electric compact crossovers have at least a 78-kWh unit, that would be a safe bet for the long-range version to get around 300 miles per charge. Other markets could get an option for a smaller pack like in the Nissan Ariya and Ford Mustang Mach-E. The 2023 Subaru Solterra will go on sale in North America by mid-2022.