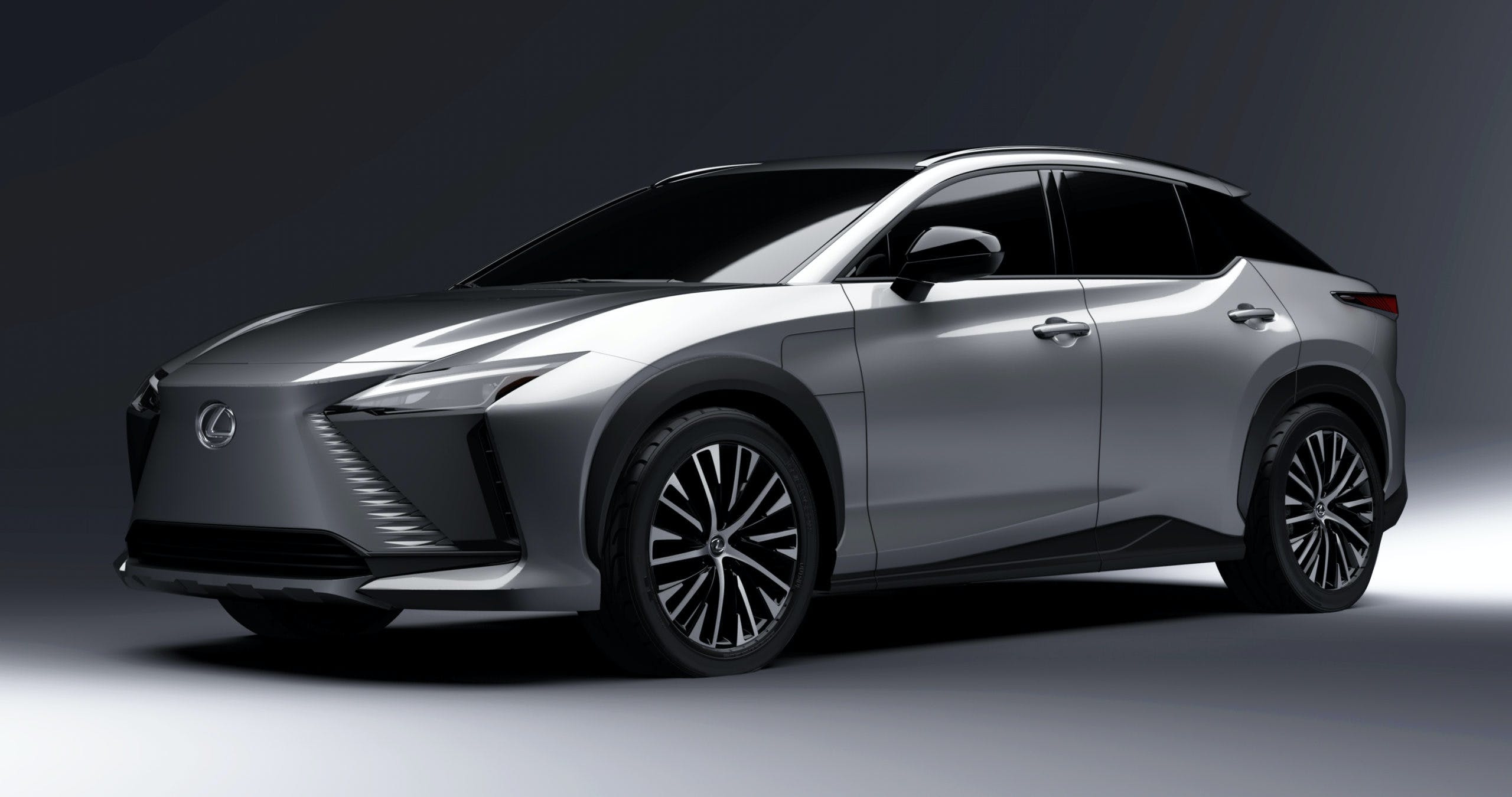 Lexus has shown off several photos of its first dedicated battery-electric vehicle throughout the second half of 2021 and we’ve got a clue as to what it will look like. However, Toyota’s luxury division has decided to drop three additional photos of the crossover in its global sales report. Now, we have an even clearer look at the 2023 Lexus RZ 450e.

The first thing you’ll notice is that there are similarities between the 2023 Lexus RZ 450e, the 2023 Toyota bZ4x, and the 2023 Subaru Solterra. All three have the same angular wedge shape, low roofline, and dramatic rear window angle. The Lexus looks sleeker because of its floating roof treatment and blacked-out C-pillar. Its headlight clusters are also shaped differently while the body cladding no longer extends to the front fascia. From the side, the RZ looks much sleeker and streamlined despite its sharp lines. It also appears to be lower to the ground since the wheel gaps aren’t as wide as they are on the bZ4x and Solterra, hinting that the RZ is more on-road focused.

Most of the design cues from the LF-Z Concept have been retained including a look that creates an outline of Lexus’ spindle grille. On the outer part, there are little stripes to highlight the crossover’s corporate face. Below the headlights, the black outer trim pieces just before the air curtains have also made it to the production car. Like the 2022 NX, Lexus is spelled out across the back. The taillights are a thin full-width design, and there appears to be a kick up at the end, making it seem like the RZ has a duckbill spoiler.

The 2023 RZ 450e will likely be underpinned by Toyota’s e-TNGA platform, which was developed specifically for battery-electric vehicles. This architecture was codeveloped with Subaru who calls it the e-Subaru Global Platform. However, for its Lexus application, Toyota likely went a different route, emphasizing on-road performance and comfort over rugged capability. This could suggest that the RZ may veer more toward the sporty end of the spectrum.

Based on the nomenclature, the RZ 450e will likely come exclusively in dual-motor configuration. It could also get a larger battery pack than the bZ4x and the Solterra, which should result in a longer driving range. Lexus vehicles wearing the 450 badge are hybrids and all of them had at least 300 hp. The latest one is the brand’s first plug-in hybrid, the 302-hp NX 450h+. Having more power could also contribute to the RZ possessing sportier road manners by giving it quick acceleration. Lexus could also get quicker charging capability than the 150-kW peak on the bZ4X and Solterra.

The RZ 450e may end up becoming the first all-electric Lexus model to get an F Sport variant. That will likely see it get an F Sport-tuned suspension, adaptive dampers, and other chassis tweaks to make it steer and handle better. Its low center of gravity, which is the result of the battery being positioned as low as possible, should give it a good starting point.

Expect the 2023 Lexus RZ 450e to make its official global debut sometime this year. It will be the vehicle to start the brand’s journey toward full electrification by 2030. Lexus will also add an all-electric successor to the LFA and additional mainstream body styles including another crossover and a sedan that may be the replacement of the current IS.