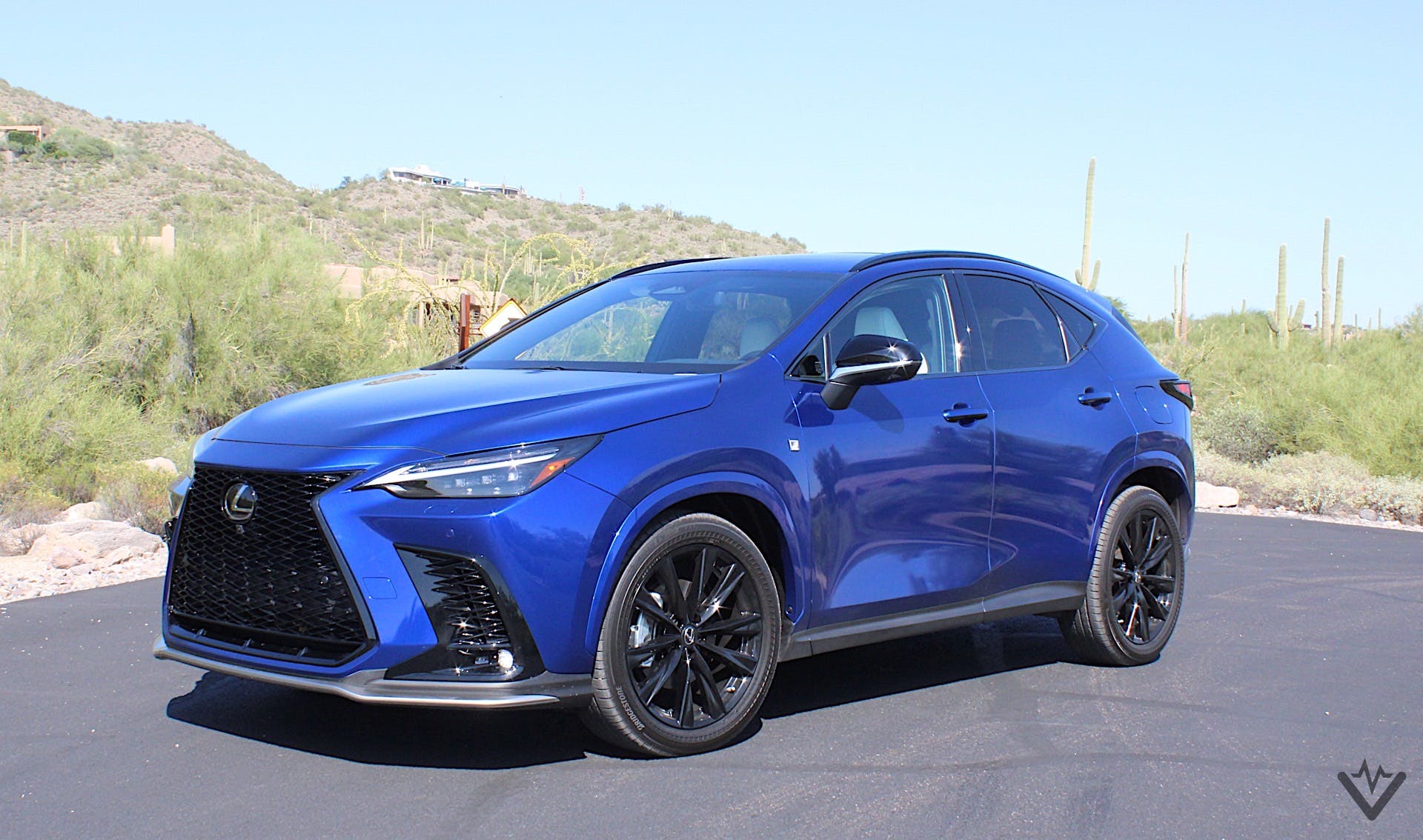 When you have a winning formula, improving on it means strategically pinpointing what needs the most attention. The first-generation Lexus NX had a lot of good things going for it but several things could’ve been better executed. With the arrival of the second-generation model, Lexus’ second bestseller has evolved to further refine its already strong formula with more electrification and new tech features. We recently spent some time out in Phoenix, Arizona to drive preproduction prototypes of the 2022 Lexus NX 350h and NX450h+ and found that these electrified models have built on the strengths of their predecessor.

Built on the TNGA-K (GA-K for short) platform shared with the ES sedan and several Toyota models, the 2022 Lexus NX is significantly lighter than the vehicle it replaces. The NX 350h, for example, weighs over 200 pounds less than the outgoing NX 300h. In terms of styling, you’re not mistaking the new crossover for anything else; it has refined the once-controversial Lexus design language into something attractive. From the full-width taillights to the resculpted headlight clusters, the NX looks familiar but fresh.

For the first time, Lexus has two electrified offerings in one model, including its first plug-in hybrid model. Both use a 2.5-liter four-cylinder coupled to two electric drive motors, a lithium-ion battery, and a planetary gear set. In the NX 350h, you get 239 hp combined, an increase of 45 hp. The EPA rates it at 41/37/39 mpg city/highway/combined, which is a bump of 8 mpg in the city and combined cycles and 7 mpg in the highway.

Between the extra power and lighter curb weight, the NX 350h moves with verve. The electric motors provide instant torque off the line and smoothens delivery when you’re on the move. It’s easy to pass slower traffic and the crossover doesn’t sound strained. In typical Lexus fashion, the NX 350h rides comfortably. Unlike the previous car, the new platform and suspension layout don’t cause it to get floaty. Through turns, it’s confident and carlike; body motions are nicely controlled while the steering is light and accurate.

The NX 450h+ builds on the NX 350h with more power and better road manners. Put your foot down and you get effortless acceleration even on the move. You can tell that the NX 450h+ is heavier because it’s not as light on its feet as the NX 350h. Thankfully that weight is mounted low thanks to the battery being positioned under the floor. There’s not much body roll and you still retain the same secure handling as the NX 350h without sacrificing ride comfort.

Should you want something sportier the NX 450h+ is also available in F Sport flavor. That gets you thicker front and rear anti-roll bars, the adaptive variable suspension, and Sport S+ and Custom drive modes. This results in tighter handling and better body control without much degradation in ride comfort. Even with the suspension in its stiffest setting, the NX 450h+ doesn’t beat you up. Complementing the improved agility is quicker steering that weights up nicely and is slightly quicker when the vehicle is in Sport S or Sport S+ mode.

As before, the electrified NX models get AWD as standard equipment. However, this isn’t a mechanical setup with a drive shaft connecting both axles. Instead, a second electric drive motor mounted on the rear axle provides traction. You’ll notice that most of the power goes to the front wheels because the rear end reacts only when you start to lose traction. Lexus has also made braking more seamless in the 2022 NX. Transitions from regenerative to mechanical braking are nearly imperceptible. There’s barely a hint when you step on the brake pedal.

To no one’s surprise, the 2022 NX has a well-trimmed interior. It’s built well and everything you interact with feels expensive. It can easily accommodate four adults; however, its rounded shape means its cargo capacity is on the small side for its segment. A little more insulation would help keep sound levels down at highway speeds where the NX suffers from a good bit of wind noise.

Perhaps the biggest upgrade is the new Lexus Interface. Available with either a standard 9.8-inch or optional 14.0-inch touch screen, this unit is a massive improvement to the quality of life. It’s quick, intuitive, and easy to use. Submenus are kept to a minimum, preventing it from getting distracting. Lexus’ virtual assistant works well, too. You can have it turn on the windshield wipers and fold the optional power-operated second row. The system easily understands natural language and will even determine if you need the temperature turned up or down more depending on how you say it. Audiophiles will also enjoy the available 17-speaker Mark Levinson surround sound system, which is clear, crisp, and easy to customize.

Second on the list of biggest upgrades is the Lexus Safety System+ 3.0 driver assistance suite. It’s no longer conservative and follows traffic seamlessly because it better manages the distance between you and the vehicle ahead. The system also reacts better to cars cutting you off, braking smoothly to maintain your set distance and keep you out of harm’s way. Lexus also made sure the collision prevention systems work subtly, meaning they don’t get annoying with their corrections. When you start drifting out of your lane, the car gently steers you back into your lane.

Pricing for the 2022 Lexus NX 350h starts at $42,175. You’ll be able to choose between the Premium or Luxury packages and then add several stand-alone options including that bangin’ Mark Levinson surround sound system. Those looking for the most powerful NX will need to shell out at least $56,635 for the NX 450h+. The F Sport variant with the suspension and chassis tweaks starts at $57,975.

Our first impression of the 2022 NX shows that the new crossover addresses the shortcomings of the old car and builds on its strengths. It’s a refinement of the original formula, making it a stronger competitor. The new tech features make the NX more competitive while the improved hybrid powertrains make it a no-compromise option even for those living in areas that experience four seasons. In short, the NX is a stronger, more compelling entry into the luxury compact crossover class.

Beyond its added appeal, the 2022 Lexus NX also signals the start of Toyota doubling down on electrification as a whole. Unlike other automakers putting their eggs in one basket, Toyota and Lexus are doing a multipronged approach to give every consumer an electrified option that can fit their needs. Hybrids and plug-in hybrids like the NX 350h and NX 450h+ are launching that offensive, which also includes battery-electric models. With the next-generation RX, GX LX, and two EVs just on the horizon, the NX is barely the appetizer and yes, we’re excited for the main course.