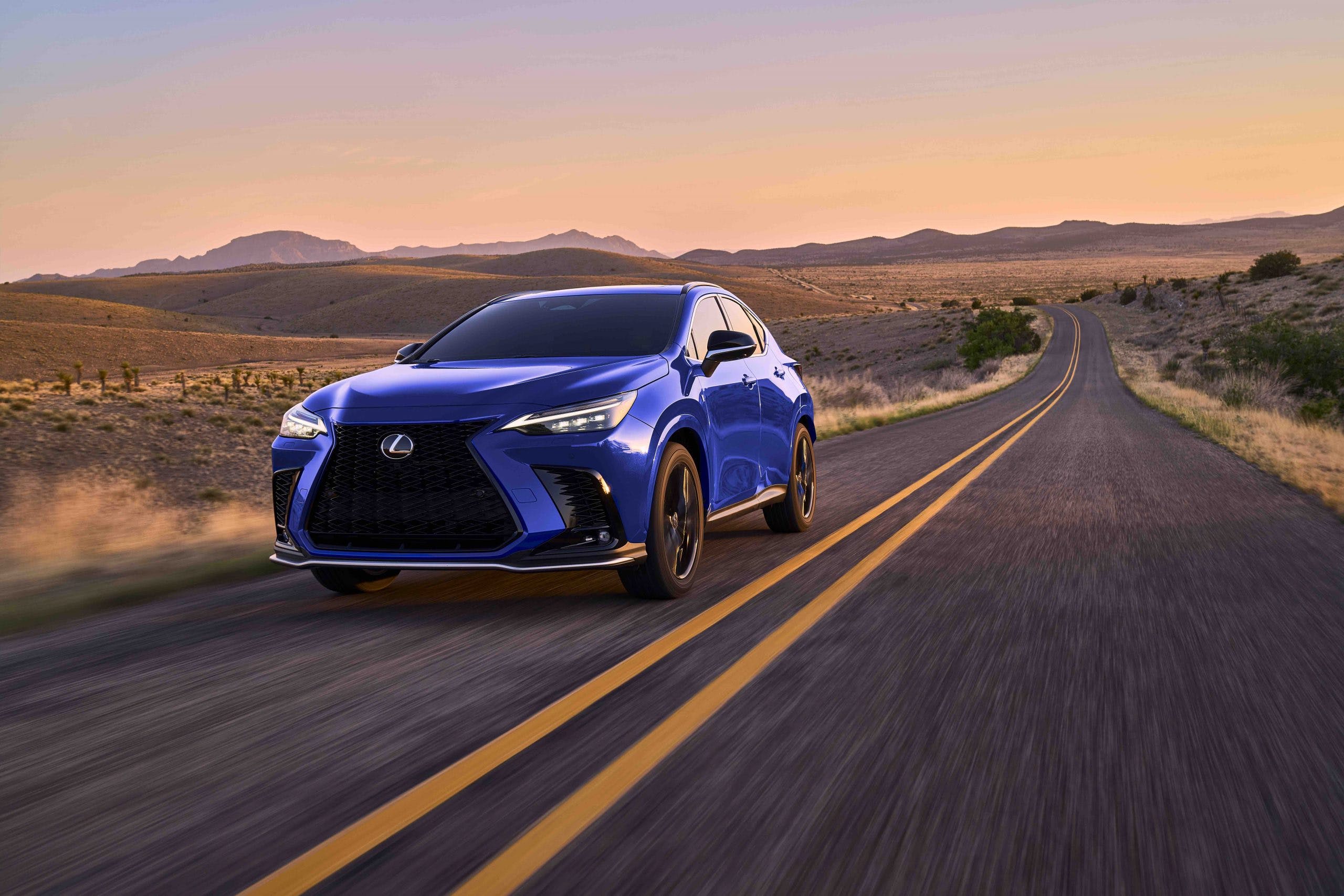 The 2022 Lexus NX has officially been unveiled and sees the brand double down on electrified powertrains. Yeah, you read that right, there are now two hybrid variants for the Lexus NX with the addition of a plug-in hybrid model. Both also get AWD as standard equipment, which should make it more attractive to consumers living in parts of the world with four seasons.Under the skin is the same TNGA-K (GA-K) platform used on the ES sedan and several Toyota models.

Both hybrid variants of the 2022 Lexus NX use a 2.5-liter four-cylinder coupled to two electric drive motors, a battery, and a planetary gear set. In the NX 350h, the system makes 239 hp combined an increase of 46 hp versus the outgoing model. Lexus says the NX 350h will hit 60 mph in 7.2 seconds and achieve 36 mpg, an increase of 6 mpg over the NX 300h.

If more power is what you’re looking for and you want it electrified, Lexus has added the NX 450h+, its first plug-in hybrid crossover. This uses the same basic foundations but adds a larger lithium-ion battery. Like the Toyota RAV4 Prime, the NX 450h+ should possess the same 302 hp combined and allow it to hit 60 mph in 6.0 seconds flat. In EV mode, the NX 450h+ is capable of traveling up to 36 miles. A 3.3 kW onboard charger is standard, allowing the NX 450h+ to get a full charge in 4.5 hours using a level 2 or 240-volt AC charger. The optional 6.6 kW should cut charging times down by 1.0- to 1.5 hours. Lexus added a new electronically controlled AWD system on the NX 450h+ that optimizes front to rear torque distribution based on the driving condition for improved handling and stability.

A new Predictive Efficient Drive program works with the built-in navigation system to learn your driving habit and predict road and traffic conditions ahead. The system will continue to optimize fuel consumption the more miles you drive in the NX and will even anticipate your behavior and where you’re likely to slow down or stop. In the case of the latter, the car will increase regenerative braking to help recharge the battery and recover more energy. For improved handling, the F Sport models get standard active variable suspension and performance front and rear dampers.

In terms of exterior design, the 2022 Lexus NX adheres to evolution over revolution. It takes the current car and refines it, giving it a more attractive look yet still recognizable as a Lexus. The spindle grille and angular headlights remain. However, the LED daytime running lights are now integrated within the upper part of the cluster instead of separated like in the current NX. Lexus also upgraded the grille pattern featuring vertical inserts in standard versions and mesh for the F Sport trim. In the back, the taillights are thinner and connected by a single LED strip. Lexus IS also spelled out on the tailgate instead of the blue highlighted badge. F Sport models get gloss-black 20-inch alloy wheels, body-colored fenders, and black roof rails.

Moving inside, you’ll find a new minimalist layout featuring a dash that’s angled slightly toward the driver. The center console now has a wireless charging tray and two USB ports (USB-A and USB-C). Quite possibly the biggest news is that Lexus has done away with the touchpad-based user interface on the 2022 NX. Instead, you get either a 9.8-inch or 14.0-inch touch screen complemented by a small digital gauge cluster. Toyota and Lexus’ newest UI also includes a new virtual assistant feature that knows who’s talking thanks to noise cancellation, seat detection, speaker location, and two microphones working together. A user profile can also be linked through the Lexus app to apply one’s personalized settings to the vehicle or use a smartphone as a key to operate the vehicle. Over-the-air (OTA) updated and wireless Apple CarPlay and Android Auto will also be standard on the 2022 NX.

Four interior color options will be available on the 2022 NX. However, you’ll only be able to get Lexus’ NuLuxe leatherette upholstery. Open pore wood, aluminum, or three-dimensional piano black trim will be offered depending on the trim you choose.

Production of the 2022 Lexus NX starts in the third quarter of 2021. Lexus will announce pricing closer to the car’s on sale date. In terms of size, the NX doesn’t appear to have grown significantly so expect it to compete against the same crop of luxury crossovers, which includes the Audi Q5, Volvo XC60, and Mercedes-Benz GLC-Class. Currently, the NX is one of the few entries with an electrified powertrain option.