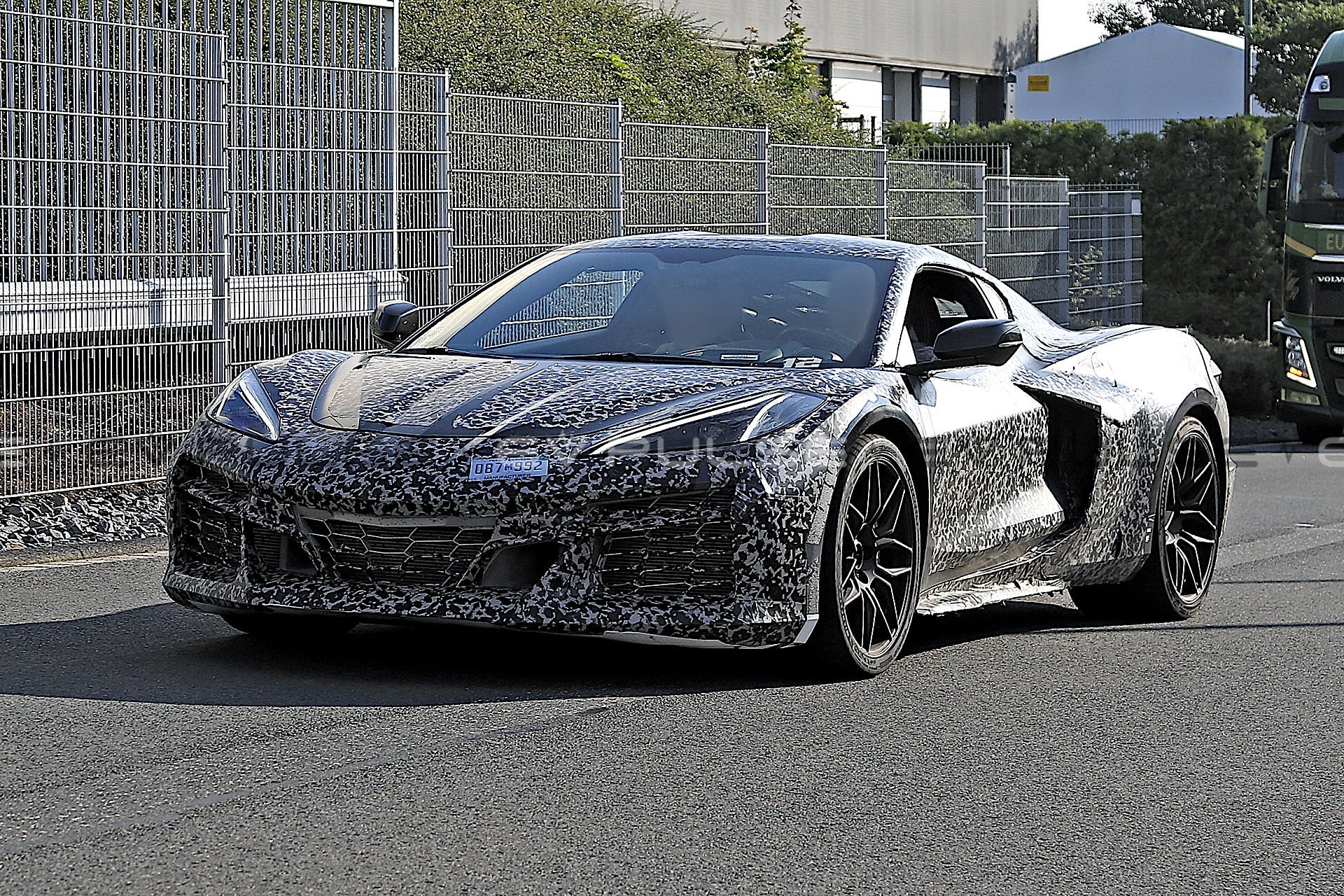 Quite possibly one of the worst kept secrets in the auto industry is that the Chevrolet Corvette is getting electrified. After General Motors filed trademarks for the E-Ray moniker, it became clear what its intentions were. Well, proof of that has finally appeared because a prototype just showed up testing near the Nürburgring Nordschleife racetrack in Germany. The 2023 Chevrolet Corvette E-Ray will be a new addition to the C8 lineup and will be the first of two electrified versions.

Spy photographers caught the 2023 Chevrolet Corvette E-Ray coming in and out of a research and development center near the famed circuit. This prototype features the same widebody design as the Corvette Z06 but retains the standard Stingray’s split quad exhausts instead of grouping all four tips in the middle section of the lower rear fascia. It also appears to have the same lip spoiler found on the Z06. The openings on the lower front fascia also look different from the other two variants.

Expect to follow the Z06 next year as a 2023 model, the Corvette E-Ray is reportedly replacing the Grand Sport model in the lineup. However, it will be more potent than the variant it replaces thanks to the assistance of an electric motor. The same 6.2-liter V8 from the Stingray will be used as the basis for the E-Ray’s hybrid powertrain alongside a small battery and the eight-speed dual-clutch automatic transmission. We suspect the electric motor to be mounted on the front axle, effectively giving it AWD. Its combined output should be around 600 to 650 hp, putting it in the same ballpark as the old Z06 in terms of power. The E-Ray could get a small lithium-ion battery mounted behind the passenger compartment or under the floor.

The Corvette E-ray is just the beginning of the marque’s electrification. Following the ZR1, a flagship variant called the Zora is expected to join the lineup. This version is named in honor of Zora Arkus-Duntov, the father of the Corvette. Arkus-Duntov was also the force in transitioning the Corvette to a mid-engine layout, which finally came to fruition for the C8 generation. Several mid-engine prototypes were made since the Corvette first appeared in the mid-1950s. Duntov created the first one dubbed the CERV II in 1964. The range-topping Corvette Zora is expected to take the upcoming twin-turbo V8 for the ZR1 and pair it with a powerful electric motor and s larger battery pack that will likely be mounted on the floor. It is expected to make over 800 hp combined. The larger battery capacity could also allow the Corvette Zora to travel short distances in all-electric mode.

As General Motors moves to fully electrify its lineup by 2035, it’s only a matter of time before the Corvette ditches internal combustion altogether. The mid-engine layout was already a hint that GM plans to electrify its flagship sports car. Eventually, an all-electric Corvette will join the lineup. GM will likely put a large, high-capacity battery under the floor and mount an electric motor on each axle. The mid-engine platform would enable GM to use its new Ultiumbatteries and powertrain components on the Corvette. That has the potential to make the upcoming electric Corvette the most potent one when you consider that Ultium-powered vehicles like the GMC Hummer EV pickup easily generates 1,000 hp.

Written by Stefan Ogbac
Follow Author
RELATED ARTICLES
$30,000 Chevrolet crossover will be powered by Ultium
Chevrolet Camaro to be replaced by an electric sedan: Report
Chevrolet confirms that Silverado EV is coming after Hummer EV, built at Factory Zero facility
What adapter do I need to connect to the Ford F-150 Pro Power Onboard generator?
RELATED ARTICLES
JOIN THE EV PULSE NEWSLETTER
Receive weekly updates on each of our electrifying articles.