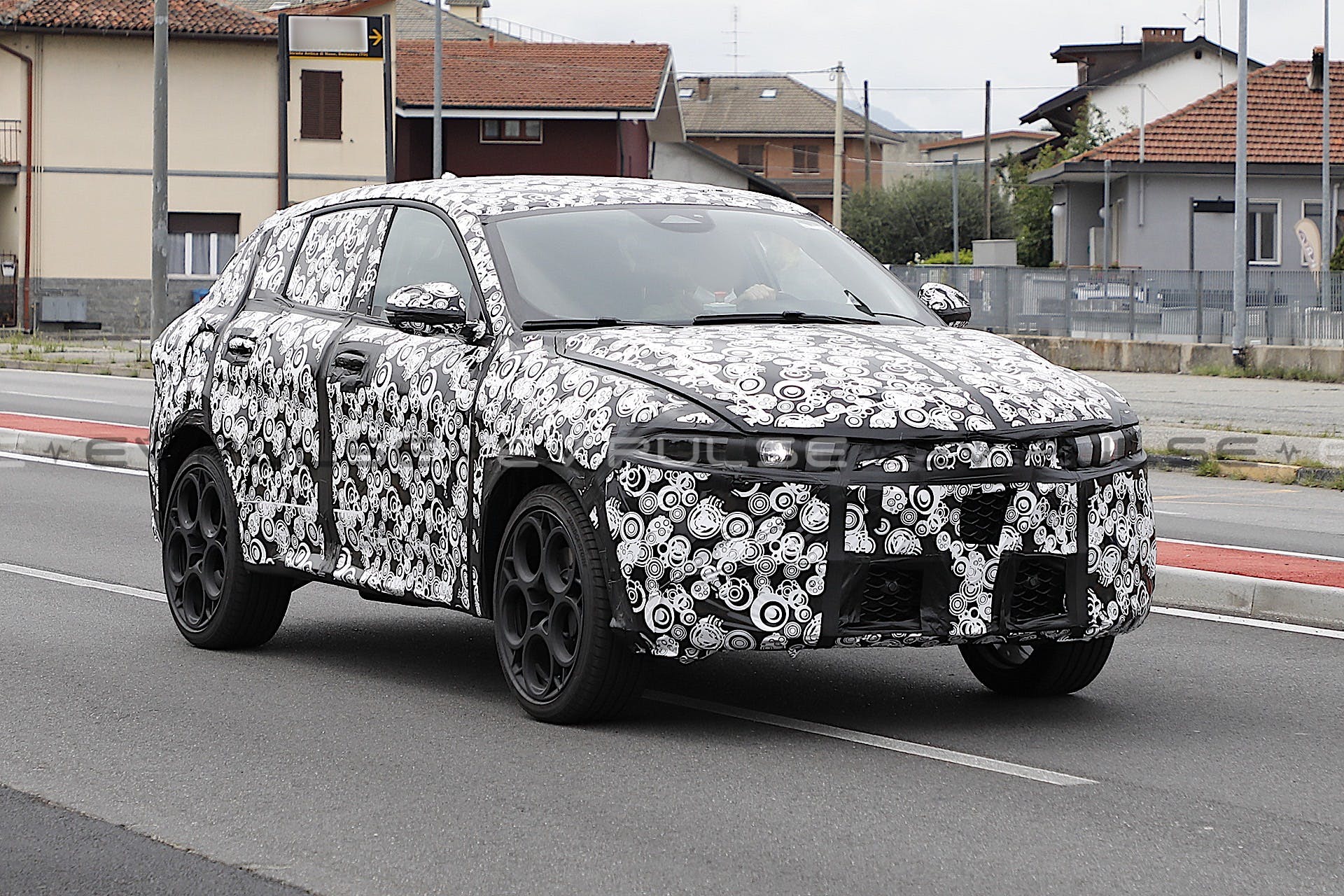 The 2022 Alfa Romeo Tonale has finally been caught by spy photographers wearing its production body and free of any plastic cladding. Even with the swirly camouflage, it’s clear that not much has changed as the crossover transitioned from concept to production. Originally shown at the 2019 Geneva auto show, the Tonale previewed a utility vehicle slotting below the Stelvio. It’s named after the Tonale mountain pass in northern Italy.

We can see that the 2022 Alfa Romeo Tonale is smaller than the Stelvio. Additionally, its exterior styling is distinct from its larger sibling, keeping it from looking like a shrunken version. From the front, you see Alfa’s trademark triangular grille peeking through the camouflage. The headlight clusters appear to be larger than the concept but the shape remains the same. Its lower front fascia looks the same too but it now appears to house two of the front parking sensors. Like most small crossovers, the Tonale looks like a tall hatchback even with the significant gap between the tires and fenders. The concept’s side cameras have also been replaced by conventional side mirrors.

The rear end remains mostly covered but the taillight design will remain similar to the concept. Alfa appears to have enlarged the rear window, though, which should improve visibility. Overall, the exterior stays true to the concept. You get a curvaceous side profile with a rounded greenhouse and a long hood. The Tonale’s C-pillar, however, appears quite thick, which could hinder the driver’s view out of the side. This prototype appears to be equipped with the largest wheel option based on the thinness of the sidewall. It also has the same five-ring design as the concept’s wheels, only this time finished in black. Hidden exhaust tips also hint at the Tonale’s electrified nature.

Alfa Romeo’s latest crossover will serve two purposes. It will be the new entry point into the Italian brand’s lineup and its first electrified model. Unlike the Stelvio and Giulia, which are RWD-based and use the Giorgio platform, the Tonale will utilize an FWD-based architecture. It’s likely a heavily modified version of the same CUSW platform found on several Stellantis vehicles including the Jeep Renegade and Compass. In other markets, the Tonale will likely be available in FWD or AWD configurations; however, in the U.S., it’s likely only getting the latter because it’s only earmarked to get a plug-in hybrid system.

Powertrain options have been a hot topic with regards to the Alfa Romeo Tonale. Originally confirmed to use a 1.4-liter turbo-four coupled to a 60-hp electric motor, and an 11.4-kWh battery, Stellantis delayed the crossover’s launchbecause the brand’s new CEO, Jean-Philippe Imparato wasn’t satisfied with its performance. It now appears that the Tonale will get a 1.6-liter turbo-four-based plug-in hybrid system that uses a 13.2-kWh battery pack and two electric motors, resulting in 300 hp combined. Should that be the case, the Tonale will be one of the most powerful vehicles in its class, trailing only Mercedes’ AMG models, the BMW X2 M50i, and the all-electric Volvo XC40 Recharge. The larger battery should also give the Tonale a more generous EV mode range, which should allow owners to drive the crossover in EV mode for extended distances.