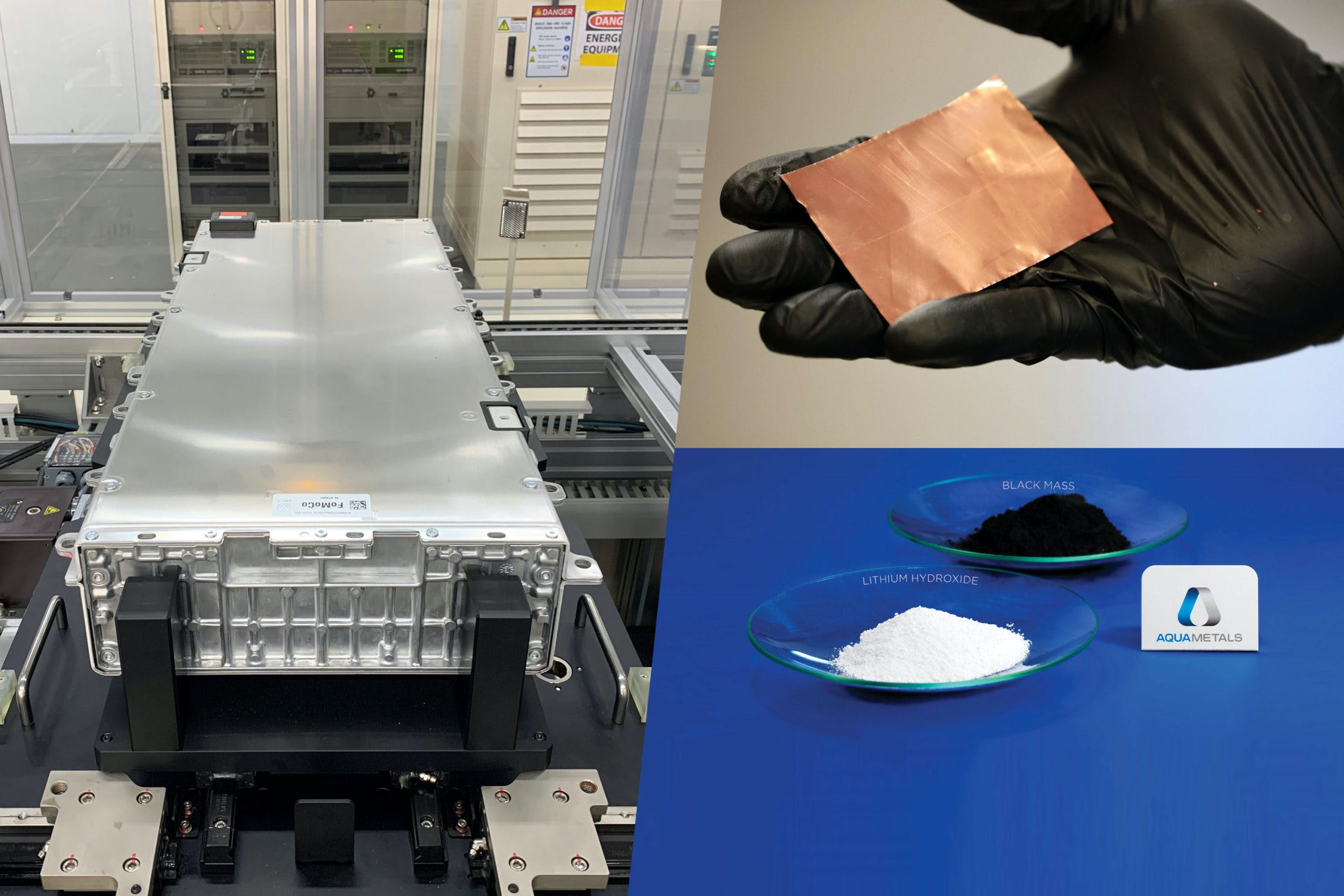 With smooth, seamless power, dramatically fewer moving parts and zero tailpipe emissions, electric vehicles offer a host of benefits over internal combustion-powered cars and trucks. Still, EVs are far from perfect. Their bulky lithium-ion batteries require enormous amounts of rare materials, and so far, there’s no good way to recycle these energy-storage devices, though a company called Aqua Metals may have an economically viable and environmentally friendly solution to this looming problem.

Whether it’s the hulking power brick in your Tesla Model 3 or the rechargeable double-A’s running your TV remote, “[Only] about 5% of lithium batteries are recycled,” said Steve Cotton, president and CEO of Aqua Metals, which means much of the remaining 95% ends up in landfills. Obviously, this is far from ideal, but it’s going to become a monumental problem in the next few years as older EVs require battery replacements or reach the end of their useful lives. Now is the time to get viable recycling processes in place, so we’re ready for the coming surge of discarded lithium-ion batteries.

Currently, Cotton said these energy-storage devices are recycled by smelting, a technology “dating back to the bronze age.” Basically, you melt everything down in a furnace to recover the constituent materials, though this also pumps a lot of nasty pollutants and carbon emissions into the air, it can be risky for workers and is very wasteful. Lithium-ion batteries, he explained, contain a mélange of different metals, everything from cobalt and copper to manganese dioxide, nickel and yes, as their name suggests, even lithium.

YOU’VE GOT TO SEE THIS: Cadillac Celestiq will be built at General Motors Global Technical Center

Arguably, the biggest hurdle to effectively recycling these batteries centers on that last element. “Today, when you smelt the lithium, you do not recapture any lithium,” said Cotton. No commercial quantity is collected. Instead, this critical material gets lost to the air or trapped in slag, that is, the crud leftover after melting everything down.

AquaRefining to the rescue

The good news is, Aqua Metals’ AquaRefining process should make lithium-ion batteries nearly 100% recyclable by enabling processors to cleanly and safely reclaim lithium hydroxide as well as metallic nickel, copper and even cobalt. “And they’re very high purity,” said Cotton. “That all happens electrolytically and without any furnaces, fires or heat,” he added, which is clean for the environment and good for workers. In fact, the whole process is water-based and happens at room temperature.

This sounds like some kind sorcery, but it’s actually an electrochemical and hydrometallurgical process. To recycle batteries, they first get broken apart, then the amalgam inside, what’s referred to as black mass (no, not that kind of black mass), a dark, sandlike substance, is separated. Next, Cotton said, “What we do differently is take that black mass material and dissolve it in our proprietary electrolyte,” a blend of organic acids and “things along those lines.” Like Colonel Sanders’ fried chicken recipe, the mix is a closely guarded secret. While there are other companies experimenting with the same technology, AquaRefining is optimized to use the least amount of chemicals possible, only about 5% as much as rival firms’ processes, which produces “orders of magnitude” fewer waste streams, said Cotton.

Once the black mass is dissolved in that electrolyte solution, the constituent materials are reclaimed through a selective-plating process. An electric charge along with special anodes and cathodes are used to capture the batteries’ elemental materials. A fundamental aspect of this process is the order in which these items are reclaimed; it’s something Cotton said is absolutely critical — and a trade secret. Of course, nothing in life is 100%, including this recycling process, but it is as good or better than anything else available today.

Another important benefit of the AquaRefining process is that it’s fast, really fast. Cotton said, “The actual plating and extraction of the minerals happens within a day,” so batteries can be broken down and their core materials collected efficiently and cost-effectively. Contrast this to extracting new stuff and there’s simply no comparison. It can take years — even decades — before a mine is able to produce commercial quantities of material, and that’s before factoring in human rights concerns and political instability in certain regions.

AquaRefining works with lead-acid batteries, too

The humble lead-acid battery is old school but still widely used in cars, boats, tractors and even golf carts. Despite this design’s comparative simplicity, recycling comes with its own challenges. In principle, the process is a snap, just break the old batteries apart and then melt down the lead plates and plastic cases, but it’s not that simple. For starters, lead is a toxic heavy metal and acid is plenty dangerous, too. These substances pose serious health risks to workers, something the Tampa Bay Times reported on last year. Images and video taken inside Gopher Resource, a lead-smelting facility in Florida, proved disturbing. According to the paper, “Many of these images show workers in unclean and dangerous conditions, sometimes narrowly escaping serious injury.”

But it’s not just conditions inside lead-smelting plants that can cause concern. Airborne emissions produced by processing this metal can poison the surrounding environment, putting communities at risk.

Cotton said AquaRefining was initially designed for recycling lead-acid batteries. Like their lithium-ion counterparts, this process is dramatically cleaner for the environment, both from carbon emissions and lead-contamination standpoints, plus it’s far safer for workers since there’s no molten lead to contend with. Aqua Metals is currently licensing this technology to a company in Taiwan.

Relatively easy to do, super quick and squeaky clean, the AquaRefining process sounds like an absolute game-changer… it also seems a bit too good to be true, like it’s some pie-in-the-sky technology that only works in laboratories and is cost-prohibitive on a larger scale, though that is not the case according to Cotton. “There’s no green without a greenback,” he said. “You have to have a sustainable business model to have sustainability,” something he and the Aqua Metals team appear to have sorted out.

Compared to mining, Cotton said, “We believe that on a per-ton basis, we can extract these minerals at a competitive [price point],” which is a huge deal because the growth in demand is almost unfathomable; practically every automaker has plans to go electric in the coming years. Once large-scale lithium-ion battery recycling comes online, we might not need to mine and refine as many of those critical materials mentioned above, since we’ll be able to recapture them instead of wastefully dumping them in landfills. Going forward, Aqua Metals plans to license its AquaRefining technology to other companies and form joint-venture partnerships to recycle batteries.

Moving forward, Aqua Metals is opening a lithium-ion recycling pilot plant at its Innovation Center located about 30 minutes east of Reno, Nevada. The facility, which will be powered by renewable energy through purchased credits, is expected to be up and running in the Sept./Oct. time frame and should be able to process 6 to 10 metric tons of black mass each month. The company is aiming to generate meaningful revenue from this project by the end of 2023.

Learning from their experiences working with lead-acid batteries, Cotton said Aqua Metals plans to scale its recycling process up in three steps, going from a pilot plant to a demonstration facility to a full-size factory. “Fortunately, our process is modular,” he added, “So we can grow it modularly.”

Recycling lithium-ion batteries is a huge issue right now. There’s a lot of catching up to do, infrastructure to build, regulations to sort out and logistical hurdles to overcome, but the AquaRefining process could provide an economically viable path to carbon neutrality and maybe even net-zero emissions in the future. “We believe that our process is the only one that can achieve that,” said Cotton.