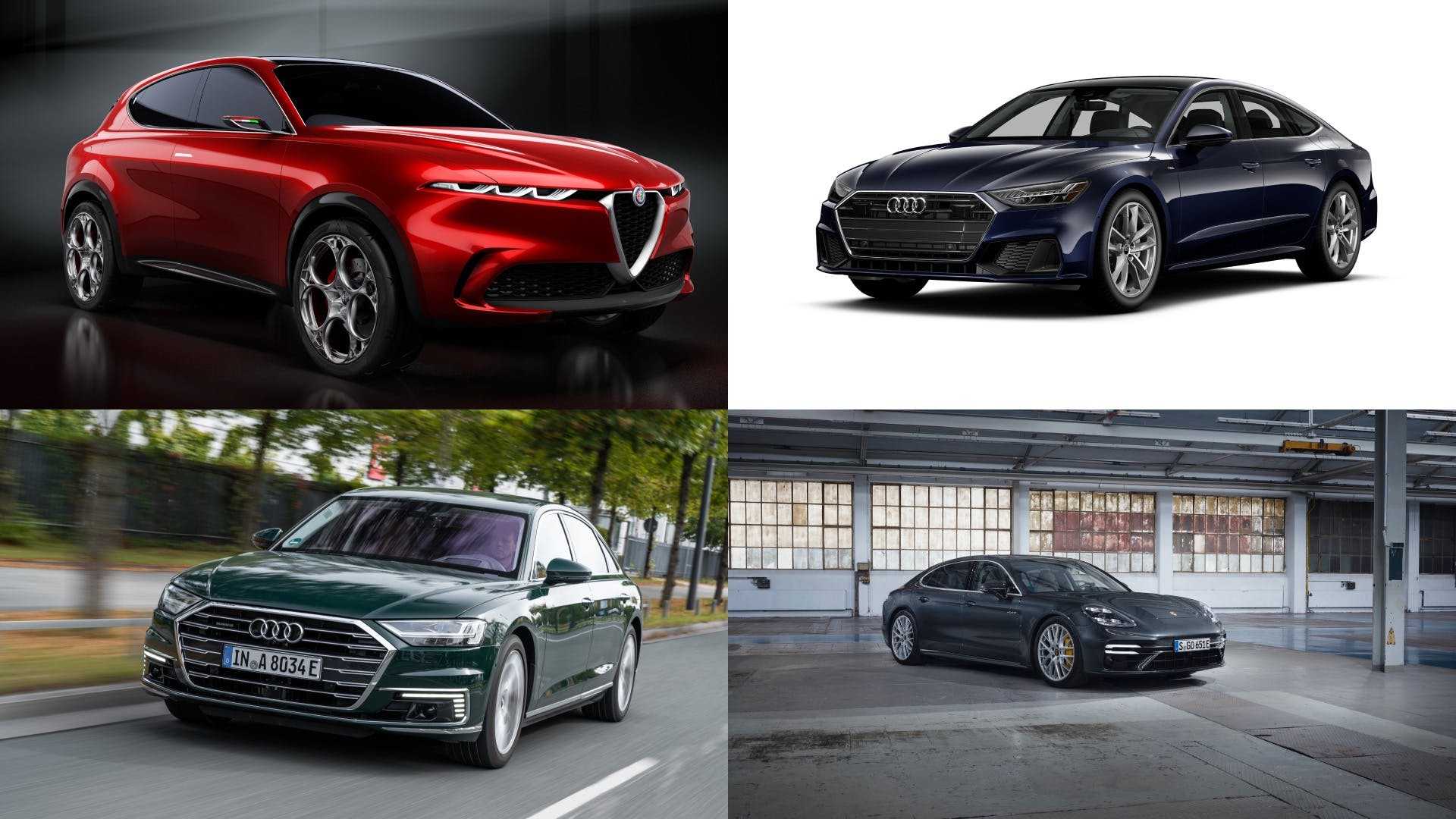 Electrification doesn’t mean only more battery-electric vehicles entering the market. They also include hybrids in both plug-in and self-charging flavors. Automakers are rolling hybrids out in droves as part of the industry’s move away from internal combustion engines. Both mainstream and luxury brands all offer hybrids and plug-in hybrids in different flavors, meaning there’s something for everyone. Here are 22 new or updated hybrids coming to market for 2021 or already on sale as a 2021 model.

The first of two electrified variants of the latest Ford F-150, the hybrid offers more power and superior efficiency. You also get more tools for work like a 7.2-kW inverter that you can use for your equipment or even charge an electric vehicle.

The electrified variants of the 2022 Hyundai Tucson mark the first time the compact crossover receives a high-output powertrain. In standard hybrid guise, the turbocharged 1.6-liter I4, electric motor, lithium-ion battery, and six-speed automatic produce 227 hp combined. The plug-in variant ups output to 261 hp thanks to a 13.8-kWh battery. AWD is standard, too, making the Tucson Hybrid and Plug-in Hybrid a viable choice if you live in a region with four seasons.

Aimed directly at the Toyota Highlander, the Kia Sorento Hybrid and Plug-in Hybrid offers three-rows along with exceptional fuel economy for a vehicle its size. If you want AWD, you’ll need to wait for the plug-in variant arriving later in the year because the conventional hybrid, which is on sale now, is offered only in S and EX guise.

Count on Toyota to put a hybrid powertrain on everything including a minivan. The latest Sienna offers only a hybrid powertrain, giving it up to 36 mpg. In case you need all-weather traction, the Sienna remains one of two minivans available with AWD.

The smallest member of the Jeep lineup will be one of the first vehicles to get an electrified powertrain. Powered by a hybridized version of the existing 1.3-liter turbo-four, the Renegade 4xe will be the most powerful version available and offer the same rugged performance as other variants.

BMW gave the 5 Series a significant refresh, which includes new tech features and a more powerful hybrid model. The 530e still uses a 2.0-liter turbo I4 coupled to an eight-speed automatic and an electric motor. Output has increased to 288 hp and 310 lb-ft of torque thanks to significant tweaks made to the system.

The swoopy yet practical Audi A7 gets a powerful new plug-in hybrid powertrain. Based around a 2.0-liter turbo I4 paired with an electric motor and an eight-speed automatic, the A7 Plug-in Hybrid is rated for 362 hp and 369 lb-ft combined. You get AWD standard, too, giving the car all-weather traction.

Hyundai did more than give the Santa Fe a nip and tuck for its refresh. The popular SUV is now on the N3 platform shared with the Sonata and has electrified powertrains. Available in SEL and Limited trims, the Santa Fe Hybrid offers up to 225 hp combined, standard AWD, and up to an EPA-estimated 36/31/34 mpg city/highway/combined. In the latter half of the year, a plug-in hybrid will join the lineup.

When it arrives in the latter half of 2021, the second generation Lexus NX will be a major overhaul for the compact crossover. Not only will it ride on the TNGA-K platform, but the NX will also get a new range of hybrid and plug-in hybrid powertrains that should offer increased power and significantly increased efficiency. Expect AWD to be standard when you opt for an electrified powertrain in the next-generation NX.

The Lincoln Corsair Grand Touring blends power and efficiency in a package that feels like a compact-sized Aviator or Navigator. With 266 hp combined, AWD, and the ability to travel an estimated 25 miles in EV mode, the Corsair Grand Touring should be an enticing package especially with all the driver assistance and multimedia tech it offers.

Expected to arrive sometime in September 2021, the Alfa Romeo Tonale will be the brand’s smallest crossover, slotting below the Stelvio. The Tonale will also be the first Alfa Romeo to offer an electrified powertrain, which is rumored to be a version of the 1.3-liter turbo-four-based system found in the Jeep Compass and Renegade 4xe models.

If you’re looking for a compact crossover with a plug-in hybrid option, your options are getting broader. The Ford Escape is one of those new additions, featuring a 14.4-kWh battery to allow for up to 30 miles of EV mode operation, according to the automaker. However, the Escape Plug-in Hybrid is only offered in FWD guise.

After several delays, the next-generation Kia Sportage (code-named NQ5) will finally debut this year. Like before, the Sportage will be closely related to the Hyundai Tucson, meaning it’ll share its powertrains including the hybrid and plug-in hybrid options. Expect the latter to be the most powerful version of Kia’s longest-running nameplate in the U.S.

One car that proves you can have power, efficiency, space, all-weather traction, and versatility is the Toyota RAV4 Prime. With 302 hp combined, 42 miles of EV mode range, the ability to travel over 600 miles, a roomy interior, and a full suite of safety features, this crossover ticks nearly every box. Beware, though, Toyota isn’t making that many so expect dealer markups.

Stylish, tech-packed, and efficient, the Hyundai Elantra Hybrid offers a lot in a compact package. You get an independent rear suspension, too, giving the electrified Elantra better road manners to complement the torquey electrified powertrain and a long list of creature comforts.

Audi’s most potent plug-in hybrid in the U.S. happens to be its most luxurious sedan. The A8 L Plug-in Hybrid utilizes a turbocharged 3.0-liter V6 coupled to an electric motor and an eight-speed automatic. With a total output of 443 hp and 516 lb-ft combined, the electrified A8 has more torque than the V8-powered A8 L 60 TFSI and is only down 10 hp.

Hybrid powertrains aren’t just for high-efficiency vehicles anymore and the Jeep Wrangler 4xe proves that you can make one viable for off-roaders. Available in four-door Unlimited trim, the Wrangler 4xe packs 375 hp and 470 lb-ft combined, 400 miles of range with a full tank and charge, and up to 25 miles of EV mode range.

The second-generation Niro (code-named SG2) will be a major overhaul as Kia repositions the small crossover. A heavily modified iteration of the current car’s platform will reportedly allow the Niro to accommodate bigger batteries under the floor. That could mean Kia will give the Niro the 13.8-kWh unit found in the Sorento, more power, and longer EV mode range in plug-in hybrid form.

Hybrid performance cars are among us and McLaren aims to get the most out of one in its latest supercar, the Artura. This will be the first application of the brand’s turbocharged six-cylinder hybrid powertrain, which could spread across the brand’s other vehicles.

A plug-in hybrid variant of the BMW X5 returns with a major powertrain overhaul. Dubbed the X5 xDrive45e, swaps the 2.0-liter turbo-four for a 3.0-liter turbo I6, and replaces the 12-kWh unit from the outgoing car with a 24-kWh unit. That results in an estimated 30-mile EV mode range and a combined output of 389 hp and 443 lb-ft.

The most powerful variant of the Audi Q5 happens to be the plug-in hybrid dubbed the 55 TFSI e. With 362 hp and 369 lb-ft combined, this version of the Q5 provides efficiency, speed, 19 miles of all-electric range, all-weather capability, a wonderfully trimmed interior, and versatility all in one package.

Porsche was one of the first automakers to utilize hybrid powertrains for high-performance applications. The Panamera, alongside the Cayenne, was one of the brand’s first hybrids and they continue to offer the most potent iterations. A refreshed Panamera arrives this year and one of the strongest models is the 690-hp Turbo S E-Hybrid.