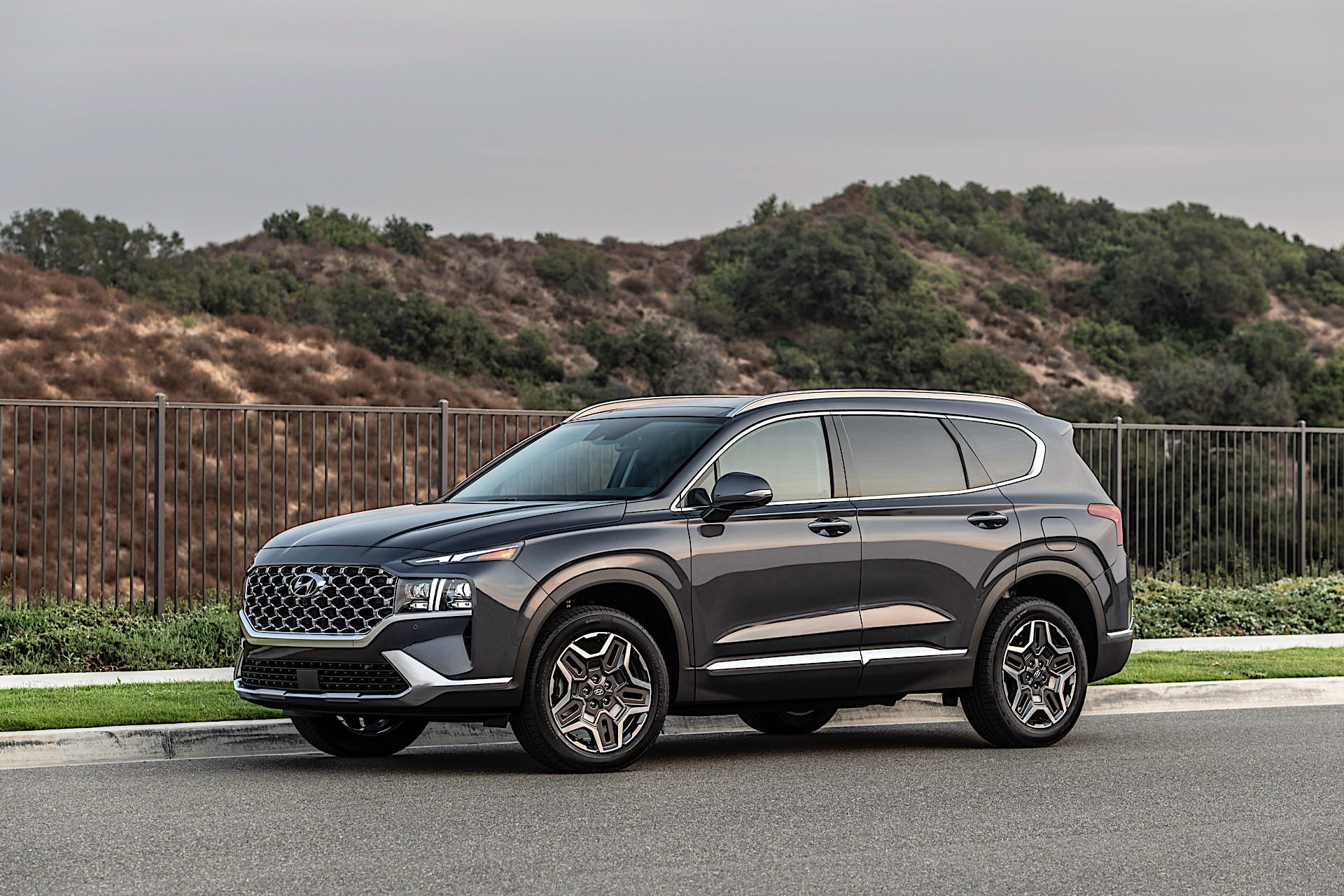 What Hyundai bills as a mid-cycle refresh of its Santa Fe compact crossover for 2021 turns out to be a rather extensive update. And it’s not even done yet.

When it goes on sale later this month, the most noticeable change to the 5-passenger 2021 Santa Fe is a bolder face with prominent crosshatch grille and slim, angled LED running lights topping dual-lens LED headlights. But that really only scratches the surface of what lies beneath… or rather, behind.

Right behind are two new engines: A standard 191-horsepower 2.5-liter four replaces a 185-hp 2.4, while top-line models get a turbocharged version of the 2.5 with an estimated 277 hp that takes the place of a 2.0 turbo with 235. Backing the base engine is an 8-speed automatic transmission, while the 2.5 turbo is mated to an 8-speed dual-clutch automatic. Both powertrains are offered with front-wheel drive or all-wheel drive. But the bigger news — particularly to those of us at EV Pulse — are upcoming hybrid and plug-in hybrid versions, which we’ll get to in a bit.

Newly standard on the safety front for the base SE is forward collision warning with automatic emergency braking and pedestrian/cycle detection, which is joined by lane-keep assist, driver attention warning, and rear-occupant alert. Also standard is adaptive stop & go cruise control. Taking one step up to the SEL nets you blind-spot alert, rear cross-traffic alert with automatic braking, lane follow assist, and safe exit assist (which warns if a vehicle is approaching from the rear when a door is opened). Added above the next-up (and former top-line) Limited is the Calligraphy, with quilted Nappa leather upholstery.

While additions here are expected, what’s perhaps a bit surprising is what some of them are — and aren’t. Wireless Android Auto/Apple CarPlay is standard … until you get to the Limited and Calligraphy, which add a navigation system with 10.25-inch touch screen that deletes the “wireless” aspect. All models get an electronic push-button shifter and parking brake, which combine to open up more console space. A new 12.3-inch touch screen is available on all but the base SE. Other newly offered features include digital key (using your Android phone to open the doors), wireless charging pad, voice recognition for radio and climate adjustments, and Smart Park Assist (moves the vehicle in or out of a perpendicular parking space without the driver having to be in the car).

They won’t be coming until about February, but Hybrids (offered only in SEL and Limited trim) will have a 1.6-liter turbo/electric motor pairing good for a combined 226 horsepower, along with a 6-speed automatic transmission and standard all-wheel drive. This marks the first Hyundai with this powertrain, a setup that’s kind of unusual as hybrids go. Why?

Well first, it’s rare (at least in the lower price classes) to have a turbo engine in a hybrid. While I always thought that combination would offer terrific synergies — the instant full power of the electric motor filling in for the dreaded turbo lag (slight delay in power delivery) inherent in turbocharged engines (which are otherwise a great way to get more power with little sacrifice in fuel economy) — most manufacturers apparently didn’t think the benefits were worth the cost. So kudos to Hyundai for bringing this marriage together.

Secondly, the powertrain includes a conventional 6-speed automatic transmission with a drive shaft sending power to the rear wheels. By contrast, the competing Honda CR-V and Toyota RAV4 hybrids both use larger, normally aspirated 4-cylinder engines (2.0- and 2.4-liters, respectively) and dual motors in front that combine to not only add power, but also act as a CVT (Continuously Variable Transmission), a design that might be considered more advanced. While the CR-V also sends power to the rear wheels via a drive shaft, the RAV4 powers the rear wheels with their own electric motor, a setup that deletes the weight and bulk of a drive shaft — also, perhaps, more advanced. So it will be interesting to see how Hyundai’s system compares to those of its rivals when it comes to fuel economy (which hasn’t yet been EPA rated) and power delivery.

What we know less about, sadly, is the plug-in hybrid, as Hyundai states only that it’s due “later this year.” That could well mean in the fall as a 2022 model. However, plug-in hybrids have a much larger battery than regular hybrids, which not only allows for some electric-only driving range, but can also supply a much stronger stream of electricity to a motor, which in turn means it can produce more power. Thus we’d expect output to be higher than the Hybrid’s 226 hp, and may even top the 277 estimated horsepower of the 2.5 turbo engine. And the plug-in may well be quicker either way. Furthermore, plug-ins are eligible for a federal tax credit (how much depends on battery capacity), and some states give them other incentives (such as HOV-lane access in California). So this is kind of a big deal.

What has been released, however, is that the Santa Fe PHEV is one of 10 electrified vehicles Hyundai says will be out in 2022 — which may mean the 2022 calendar year. While this includes hybrid, plug-in hybrid, battery electric, and fuel-cell vehicles, it’s an indication that Hyundai is getting really serious about its “green” game.

Written by Rick Cotta
JOIN THE EV PULSE NEWSLETTER
Receive weekly updates on each of our electrifying articles.