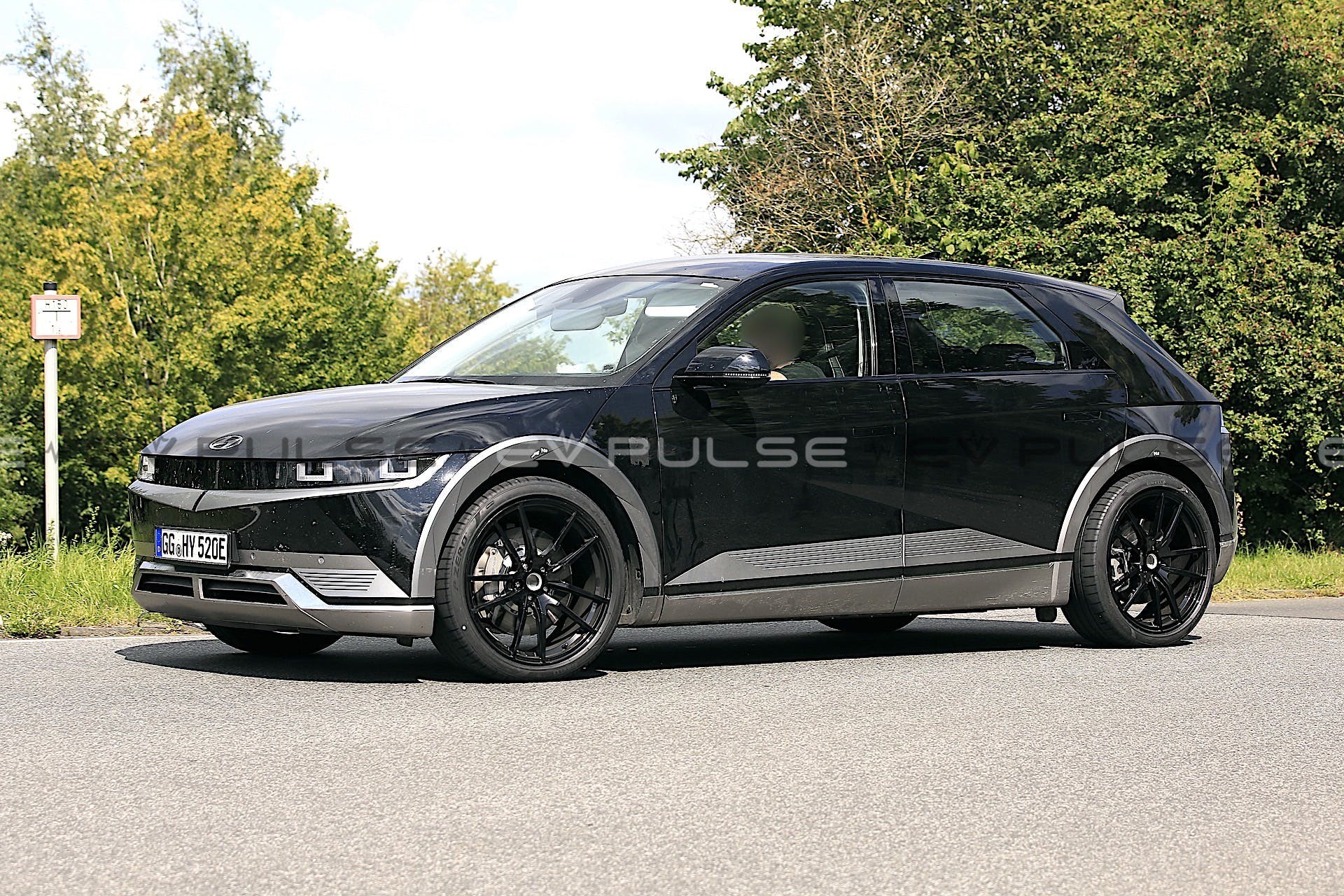 The high-performance N version of the Hyundai Ioniq 5 has been caught for the first time. Spy photographers snapped the prototype testing in Germany and it appears that it was being tested near the Nürburgring Nordschleife racetrack where Hyundai Motor Group has a development center. This Hyundai Ioniq 5 N prototype has a few things that give it away as the high-performance model. Pirelli P Zero summer tires wrapped around what appears to be 21-inch alloy wheels are the first ones. Massive brake pads behind it are the other hints.

Shooters noted that this Hyundai Ioniq 5 N prototype had an extremely stiff chassis. The car also appears to be a little lower than the standard car, putting its center of gravity closer to the road, reducing body motions. With the flexibility of Hyundai Motor Group’s E-GMP platform, there’s no doubt that sporty cars are part of the company’s electrification offensive. With the Kia EV6 GT launching as the first high-performance battery-electric vehicle, it was only a matter of time until Hyundai jumped on the bandwagon.

Expect the Ioniq 5 N to feature two electric motors, effectively giving it AWD. Like its Kia cousin, it could get up to 576 hp and 545 lb-ft of torque. In addition to the extra power, the Ioniq 5 N could get significant suspension tweaks including the addition of adaptive dampers and an electronically-controlled limited-slip differential to heighten its handling capabilities. The electric motors could also be used for torque vectoring, which should allow for some more fun on the road. Hyundai could keep the same 77.4-kWh battery found on the standard Ioniq 5.

There doesn’t seem to be any design tweaks on this Ioniq 5 N prototype to distinguish it from the standard model. It still retains the contrasting body cladding with the same vortex effect found in the optional 20-inch alloy wheels on the standard dual-motor version. The cool pixel-style LED headlights and taillights haven’t changed either, meaning the hot version could be a sleeper.

The Ioniq 5 N won’t be the first high-performance vehicle on the E-GMP platform. Hyundai has also earmarked its upcoming Ioniq 6 sedan to get a hot N variant, which is most likely aimed at the Tesla Model 3 Performance. That vehicle could be the most potent of Hyundai’s all-electric N vehicles because the company’s new architecture and electric powertrain are reportedly capable of making well over 600 hp. That could allow the electric N models to offer supercar levels of acceleration. The Kia EV6 GT, which is the most powerful E-GMP-based vehicle announced to date, is capable of hitting 60 mph in 3.5 seconds.

Expect the Hyundai Ioniq 5 N to be the second high-performance all-electric Hyundai model. The Ioniq 6 will likely be the first because Hyundai is reportedly tailoring that vehicle as a sports sedan. Its more practical crossover sibling could follow soon after, expanding its appeal to those looking for something sporty but can multitask as a fun machine, daily driver, and family vehicle.

The Hyundai Ioniq 5 is the first of three vehicles that make up Hyundai’s Ioniq sub brand. It will be followed next year by the Ioniq 6 sedan and the three-row Ioniq 7 mid-size crossover in 2024. All three will be on Hyundai Motor Group’s E-GMP platform, which has been built specifically for EVs. By 2025, Hyundai Motor Group’s three brands will release 22 EVs globally with several using the E-GMP architecture.