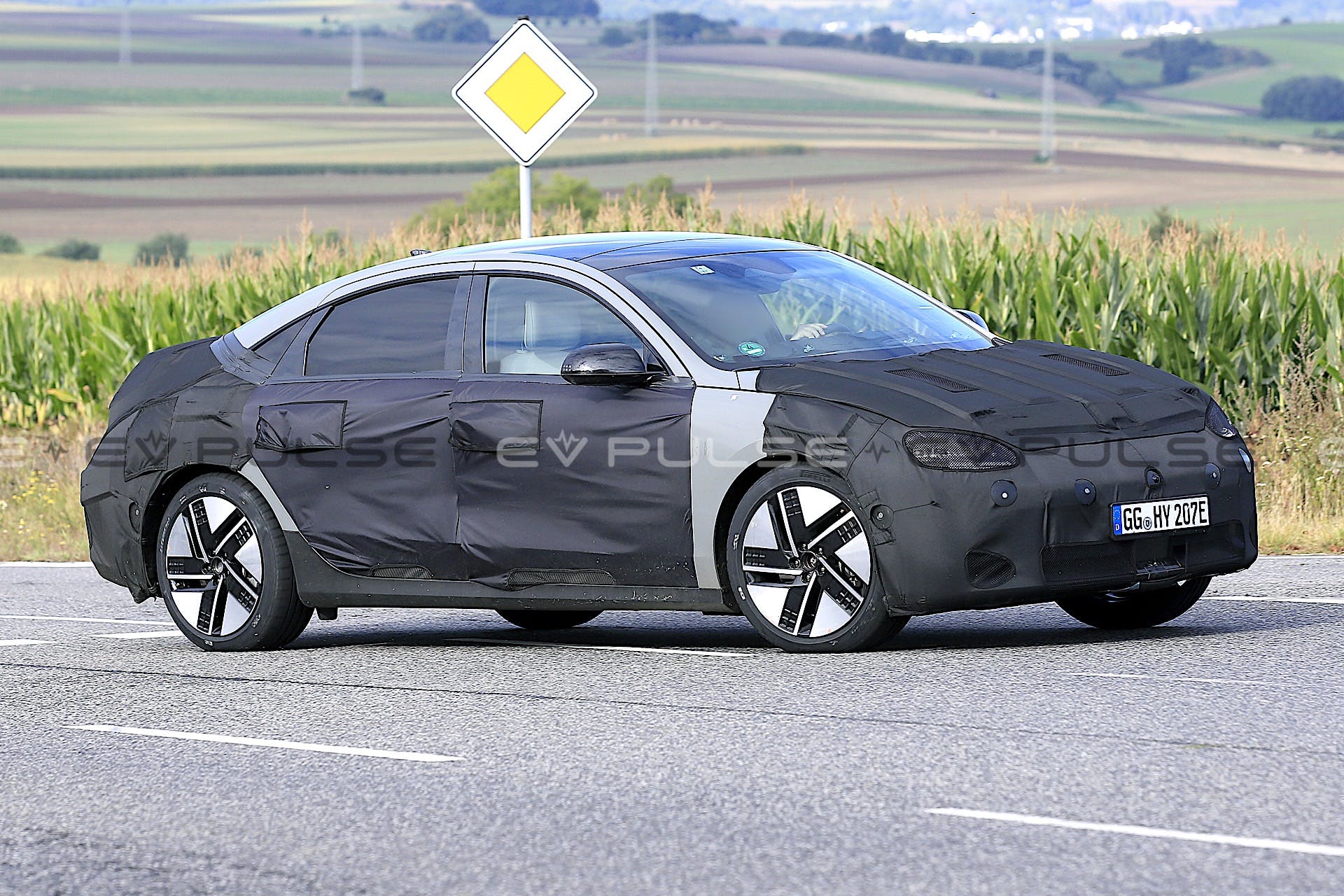 The second member of Hyundai’s Ioniq sub brand has finally been caught testing. Essentially the production version of the Prophecy Concept, the 2023 Hyundai Ioniq 6 is a sedan aimed directly at the Tesla Model 3. Spy photographers caught the swoopy four-door testing in Germany and even though it’s still covered in camouflage, we can see the influences from the show car it’s based on.

Just like other battery-electric sedans, the 2023 Hyundai Ioniq 6 is low and curvaceous. The curves from the Prophecy Concept survived although it’s obvious that designers toned it down for the production car. Its rear deck lid appears to be extremely short, too, further hinting at its wedgelike side profile. Don’t expect this to be a liftback like the Polestar 2 because our inside sources have confirmed the Ioniq 6 has a trunk. The flush door handles, on the other hand, appear to have survived because there doesn’t appear to be a physical one protruding into the plastic cladding. Hyundai appears to have kept the oval headlight cluster and the full-width pixel-style LED taillights, the latter of which is one of the trademarks of the Ioniq sub brand.

A short front end exaggerates the Ioniq 6’s greenhouse, further adding to its curvy shape. The wheels on this prototype appear to be aerodynamically optimized units made to improve the sedan’s range and wind-cheating capabilities. We’ve yet to see the interior but expect it to feature the same dual-screen layout as the Ioniq 5. It could also get those sweet reclining seats with ottomans for the driver and front passenger.

When it debuts next year, the Ioniq 6 will be the second Hyundai vehicle on the group’s E-GMP platform, which has been developed specifically for battery-electric vehicles. Unlike the Ioniq 5, the Ioniq 6 could be billed as a sporty EV with a lower center of gravity. Expect the same 77.4-kWh battery to find its way into the Ioniq 6. Single-motor long-range RWD models should make 225 hp and 258 lb-ft of torque while dual-motor long-range versions will make 320 hp and 446 lb-ft combined. Since it’s likely lighter and more aerodynamic than the Ioniq 5, expect the Ioniq 6 to be able to travel more than 300 miles per charge in its long-range single-motor iteration.

The Ioniq 6 could also be one of the most powerful vehicles in its class thanks to an upcoming N variant. That version will likely share its powertrain with the Kia EV6 GT where it makes 576 hp and 545 lb-ft. It could also get adaptive dampers and an electronically-controlled limited-slip differential. Together with the Ioniq 5 N, the Ioniq 6 N could form the backbone of Hyundai’s battery-electric performance lineup.

Like every Hyundai, Kia, and Genesis model on the E-GMP platform, the Ioniq 6 will have a 400- and 800-volt charging architecture. That means it’ll be able to DC charge from 10 to 80 percent in 18 minutes with peak rates of over 200 kW. It’ll also AC charge faster than previous Hyundai EVs like the Kona Electric and the recently discontinued Ioniq Electric thanks to a 10.9 kW onboard charger.

Expect the 2023 Hyundai Ioniq 6 to debut sometime next year before going on sale in the U.S. by the end of 2022. The N version should follow after the standard sedan. Hyundai will complete the initial lineup of its Ioniq sub brand in 2024 with the Ioniq 7 three-row crossover. That will likely not be the end because the Korean giant is reportedly adding a subcompact crossover on the E-GMP platform as a successor to the Kona Electric.