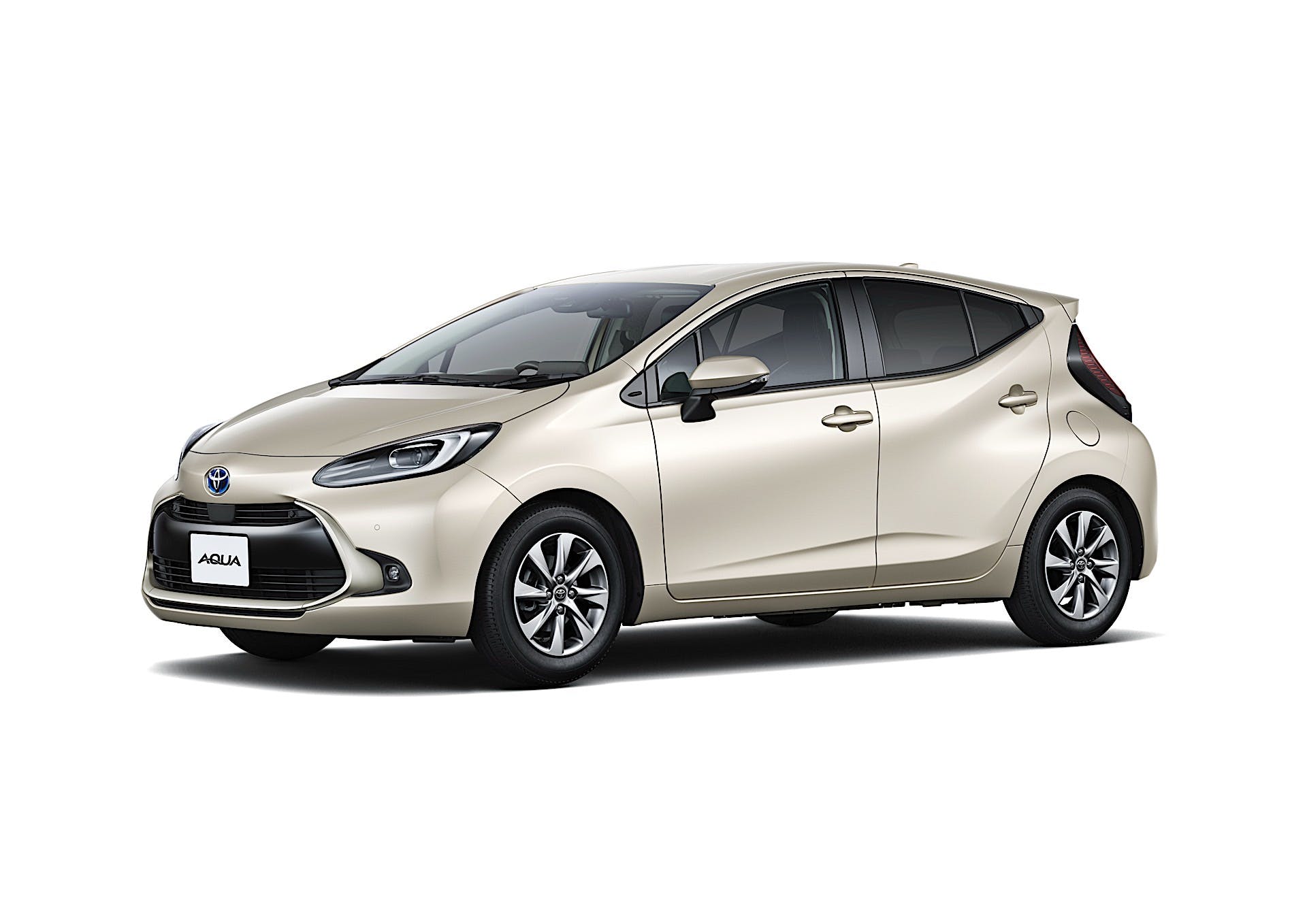 The second-generation Toyota Aqua has launched in Japan and it sports an evolutionary look. It’s still curvy and slick, only this time you get more stylized headlight and taillight clusters, narrower side windows, and a new iteration of Toyota’s catfish-like grille. Like the outgoing model, you can get the new Aqua in vibrant colors including bright red, yellow, blue, and what appears to be mint green or the same Seaglass Pearl found in the larger Prius. Perhaps the biggest change for Toyota’s smallest hybrid is the addition of AWD. Unlike most systems, this is like an e-AWD meaning it has an electric motor mounted on the rear axle to add traction back there.

Inside, the second-generation Toyota Aqua adopts the brand’s latest interior design. However, you get more nifty storage solutions like a sliding center console tray plus an available 10.5-inch main touch screen. The two-tier dash layout has been replaced by a more conventional one and it appears Toyota has added a head-up display and a digital gauge cluster as an option. A new electronic shifter appears to have replaced the only joystick-like layout found in the outgoing car. In addition to leatherette, you can get the Aqua with the real stuff. Every model also gets a 100-volt/1,500-watt power outlet, allowing the car to work as a power source when needed. This feature is also found in the Toyota Sienna and RAV4 Prime.

Underpinning the new Aqua is Toyota’s TNGA-B architecture, which is used primarily on subcompact cars like the global-market Yaris. The wheelbase has been stretched by 50 mm or 1.9 inches, increasing rear-seat space and overall cargo capacity. Thanks to the new platform, the Aqua’s body is stiffer and more rigid. Toyota also says that it’ll quieter and more stable.

You get a full suite of driver assistance features in the Aqua. This includes collision prevention technologies like front automatic emergency braking that works at junctions and intersections. Lane centering and adaptive cruise control with stop and go are also standard. Toyota is equipping the Aqua with its Teammate Advanced Park and Parking Support Brake feature. This is essentially Toyota’s automatic parking system, allowing the car to maneuver itself into a parking spot. All you need to do is operate the brake pedal. It also enables front and rear automatic emergency braking to stay active even at parking lot speeds. A surround-view camera appears to be available too.

Powering the Aqua is Toyota’s hybrid system based on a new 1.5-liter four-cylinder engine. It’s also the first model to use what Toyota calls a high-output bi-polar nickel-metal-hydride battery. Versus the outgoing model’s pack, this new unit has twice the energy density, allowing for more power, a more responsive accelerator pedal, and extended operation in all-electric mode during city driving. Thanks to fewer current controllers and other parts, the new battery stacks more cells while being smaller than the old one. Greater active surface area, simpler construction, and lower resistance allow for better current flow in the battery, which is what enables the increased output. Toyota didn’t disclose the hybrid powertrain’s combined output but it’s likely the same 118 hp as in the Yaris Hybrid.

The new Aqua is also the first Toyota model to feature the Comfort Pedal. This essentially enables one-pedal driving because it only requires the driver to ease off the accelerator to slow the vehicle down. Power+ mode increases the level of regeneration, allowing the vehicle to slow down even faster.

At least for now, the Toyota Aqua will go on sale in Japan first. There’s no word on whether it will go to other markets or if it will ever come back to North America.